John Allsebrook Simon, 1st Viscount Simon GCSI GCVO OBE PC (28 February 1873 – 11 January 1954) was a British politician who held senior Cabinet posts from the beginning of the First World War to the end of the Second. He is one of only three people to have served as Home Secretary, Foreign Secretary and Chancellor of the Exchequer, the others being R.A. Butler and James Callaghan (Roy Jenkins narrowly missed becoming the fourth, when Callaghan preferred Anthony Crosland to him as Foreign Secretary in 1976, despite Jenkins's well-known desire for the appointment). He also served as Lord Chancellor, the most senior position in the British legal system. Beginning his career as a Liberal, he joined the National Government in 1931, creating the Liberal National Party in the process. At the end of his career, he was essentially a Conservative.

Simon was the son of Edwin Simon (1843–1920), a Congregational minister in Manchester, and Fanny Allsebrook (1846–1936).[1] Educated at Fettes College in Edinburgh and Wadham College, Oxford, where he was a near-contemporary of F.E. Smith and of the athlete C.B. Fry, he became a fellow of All Souls in 1897 and was called to the bar at the Inner Temple in 1899.[1]

Simon became a successful lawyer, and entered the House of Commons as a Liberal Member of Parliament (MP) for Walthamstow at the 1906 general election, later being elected for Spen Valley. He entered the Government as Solicitor-General in 1910, and advanced in 1913 to Attorney-General, in both cases succeeding Rufus Isaacs; he was the leader of the (unsuccessful) Cabinet rebels against Winston Churchill's 1914 naval estimates, and contemplated resigning in protest at the declaration of war in 1914 but in the end did not do so.

In Asquith's coalition government in May 1915, Simon became Home Secretary, declining an offer of the Lord Chancellorship, but resigned early the next year in protest against the illiberal introduction of conscription. He proved his patriotism by serving briefly as an officer on Trenchard's staff in the Royal Flying Corps.

After Asquith's fall in late 1916, Simon remained in opposition as an Asquithite Liberal until he lost his seat at the "Coupon Election" in 1918. In 1919 he attempted to return to Parliament at the Spen Valley by-election. Although the Coalition Liberals who had formerly held the seat were pushed into third place, Simon came second; in the view of Maurice Cowling his defeat by Labour marked the point at which Labour began to be seen as a serious threat by the older parties. During the early 1920s he practiced successfully at the Bar, before winning Spen Valley at the General Election in 1922, and in 1922-24 he was treated almost as deputy leader of the Liberal Party, a role he relinquished when Asquith once again lost his seat in Parliament and Lloyd George took over the chairmanship of the Liberal MPs. Unlike Lloyd George, Simon opposed the General Strike in 1926. Simon spoke for Newfoundland in a boundary dispute with Canada, before announcing his permanent retirement from the Bar, then from 1927 to 1931 he chaired the Simon Commission on India's constitution.

During the late 1920s and especially during the 1929-31 Parliament, in which Labour had no majority but were allowed to continue in office by the Liberals, Simon was seen as the leader of the minority of Liberal MPs who disliked Lloyd George's inclination to support Labour rather than the Conservatives. In June 1931, before the formation of the National Government, Simon resigned the Liberal whip and was accused by Lloyd George of leaving "the slime of hypocrisy" as he crossed the floor. 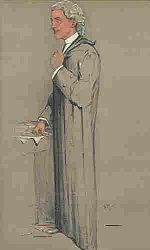 In 1931, when the Liberals split once again, Simon became leader of the Liberal Nationals (later to become the National Liberals) who continued to support protectionism and Ramsay MacDonald's National Government after the departure of the mainstream Liberals under Herbert Samuel. Simon was never opposed by a Conservative candidate at Spen Valley after 1924, and over time, Simon's Liberal Nationals became hardly distinguishable from the Conservatives, although some Conservative MPs continued to be known locally as "National Liberals" for decades after the Second World War.

Simon served as Foreign Secretary under MacDonald, highlights of his tenure of office being the repudiation by Germany, under its new chancellor Adolf Hitler, of the League of Nations and of Disarmament efforts, and the Japanese occupation of Manchuria. He attracted particular opprobrium for a speech in Geneva in December 1932, in which he failed explicitly to condemn Japanese actions.(Douglas Reed, 'All Our Tomorrows'pub.1942,pg.62 ~ Geneva, 1931, Sir John Simon congratulated by the Japanese emissary for presentation of Japan's case against China').[citation needed]

Simon then served as Home Secretary,[2] during which time he passed the Public Order Act 1936 restricting the activities of Oswald Mosley's Blackshirts, and Deputy Leader of the House of Commons under Baldwin and Chancellor of the Exchequer under Chamberlain, of whom he had become a close political ally.[citation needed]

Simon was cursed with an unfortunately chilly manner, and from at least 1914 onwards had difficulty in conveying an impression that he was acting from honourable motives. His awkward attempts to strike up friendships with his colleagues (e.g. asking his Cabinet colleagues to call him "Jack") often fell flat. Neville Chamberlain wrote of Simon: "I am always trying to like him, and believing I shall succeed when something crops up to put me off", while Harold Nicolson described him more pithily as "a toad and a worm". Another anecdote from the late 1940s tells how the socialist intellectual G. D. H. Cole got into a third-class compartment on the train back from Oxford to London, to break off conversation with Simon; to his dismay Simon followed suit, only for both men to produce first class tickets when the inspector did his rounds.[3]

By 1940 Simon, along with his successor as Foreign Secretary Sir Samuel Hoare, had come to be seen as one of the "Guilty Men" responsible for appeasement of the dictators ("the snakiest of the lot" in Hugh Dalton's description), and like Hoare his continued service in the War Cabinet was not regarded as acceptable in the new coalition. Simon was raised to the peerage as Viscount Simon, of Stackpole Elidor in the County of Pembroke, and became Lord Chancellor in Churchill's government, although he did not sit in the War Cabinet. In 1945 Churchill formed a brief "Caretaker" administration but once again excluded Simon from the Cabinet. After Churchill's defeat in 1945, Simon never held office again. Although he had won plaudits for his legal skills as Lord Chancellor, Attlee declined to appoint him to the British delegation at the Nuremberg War Trials, telling him bluntly in a letter that his role in the pre-war governments made this unwise. In 1951 Churchill did not offer him a return to the Woolsack. Simon's portrait[4] (by Frank O. Salisbury, 1944) is in the National Portrait Gallery.

In 1952 Simon published his memoirs, Retrospect, which Harold Nicolson reviewed as saying that he described the "nectarines and peaches of office" as if they were "a bag of prunes". The quote, "I so very tire of politics. The early death of too many a great man is attributed to her touch" is from Simon's memoir. After his death in 1954, Simon's estate was probated at £93,006.

Lord Simon married Ethel Venables in June 1899 in Headington, Oxfordshire, later to be vice-principal of St Hugh's Hall. They had three children - Margaret (Mrs. Geoffrey Edwards), Joan (Mrs. John Bickford-Smith) and John Gilbert, the 2nd Viscount Simon, (1902–1993). His first wife died soon after the birth of her son in September 1902. He remarried in 1917 Kathleen Rochard Manning (1863/4-1955) from Ireland, daughter of Francis Eugene Harvey and herself a widow with one son who had for a while been governess to Simon's children. Lady Simon was an anti-slavery activist and also involved in opposing antisemitism, supporting black civil rights in the USA, child welfare and the Salvation Army. After her first marriage to Dr. Thomas Manning, she and her husband had moved to Tennessee and there she had encountered and been appalled by segregation; after his death and her return to Britain she joined the Anti-Slavery Society. In 1929 she wrote a book, Slavery describing the current situation around the World and in particular as it still existed in the British Empire. She was created a Dame Commander of the Order of the British Empire in 1933. She died in 1955 aged 91.[5][6][7]