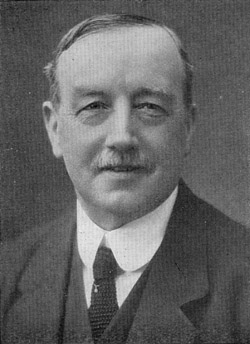 Arthur Henderson was born in , in 1863, the son of a textile worker who died when Arthur was only 10 years old. After his father's death, the Hendersons moved to in the North East of .

Henderson worked in a locomotive factory from the age of 12. After finishing his apprenticeship at seventeen, Arthur Henderson moved to for a year and then returned to work as an iron moulder (a type of ) in Newcastle-upon-Tyne. He converted to (having previously been a Congregationalist) in 1879. This had a major impact on Henderson and he became a . In 1884, Henderson lost his job, and concentrated on his education, and preaching commitments.

However by 1892, Henderson had entered the complex world of politics, when he was elected as a paid organiser for the Iron Founders Union, and was also a representative on the North East Conciliation Board.

Henderson believed that strikes caused more harm than they were worth, and tried to avoid them whenever he could. For this reason he opposed the formation of the General Federation of Trade Unions, as he was convinced it would lead to more strikes.

In 1900, Henderson was one of the 129 trade union and socialist delegates, who passed 's motion to create the (LRC), and in 1903, Henderson was elected treasurer of the LRC, and was also elected (MP) for following a by-election.

In 1906, the LRC changed its name to the Labour Party and won 29 seats in the general election of that year (which was a for the Liberal Party).

In 1908, when Hardie resigned as Leader of the Labour Party, Henderson was elected to replace him, and was leader for two fairly quiet (from Labour's perspective) years, before resigning in 1910.

In 1914, the First World War broke out, and the then-Labour leader, , resigned in protest. Henderson was elected to replace him, and in 1915, following Prime Minister Asquith's decision to create a coalition government, became the first member of the Labour Party to become a member of the Cabinet, as .

In 1916, forced Asquith to resign and became Prime Minister. Henderson became a member of the small with the job of . Other labour and union representatives to join Henderson in Lloyd george's coalition government were; John Hodge and George Barnes. John Hodge became Minister of Labour whilst Barnes became Minister of Pensions. [Hopkins, eric, "A Social History of the English Working Classes, 1815-1945, Hodder and Stoughton 1979. p219"] Henderson resigned in August 1917 when his idea for an international conference on the war was voted down by the rest of the cabinet; shortly afterwards he resigned as Labour leader.

The coupon election and the 1920s

Henderson lost his seat in the "coupon election" of December 14, 1918, an election announced within twenty four hours of the end of hostilities in that resulted in a landslide victory for a coalition formed by presiding Prime Minister [http://politics.guardian.co.uk/electionspast/story/0,15867,1450370,00.html] Henderson returned to Parliament in 1919 after winning a by-election in Widnes. After his election, he became Labour's chief whip, only to lose his seat in the 1922 general election.

Again, he returned to Parliament via a by-election, this time representing Newcastle East, however he lost this seat in the 1923 general election, but returned to Parliament two months later after winning a by-election in Burnley. He was appointed Home Secretary in the first ever Labour government (led by MacDonald). This government was defeated in 1924, and lost the following election partially because of the printed in the right-wing broadsheet the "".

Unusually, Henderson was re-elected in 1924, and he refused to challenge MacDonald for the party leadership, despite being apparently begged by other MPs to do just that. Worried about factionalism in the Labour Party, he published a pamphlet called "Labour and the Nation", in which he attempted to clarify the Labour Party's goals.

One interesting note is that the Communist Party and its leaders in the USSR, specifically himself, considered Henderson a dupe and held him and his positions in very low regard. In a 10 February 1922, letter to the Soviet Foreign Affairs Commissar Georgy Chicherin in relation to the Genoa Conference, Lenin wrote pejoratively: [Handwritten note at the Russian Center for the Preservation and Study of Documents of Recent History, fond 2, opis 2, delo 1,1119. Published as Document 88 in "The Unknown Lenin", ed. , , 1996, ISBN 0-300-06919-7]

"Henderson is as stupid as , and for this reason he is helping us". ...

Furthermore. This is ultrasecret. It suits us that Genoa be wrecked... but not by us, of course. Think this over with Litvinov and Ioffe and drop me a line. Of course, this must not be mentioned even in secret documents. return this to me, and I will burn it. We will get a loan better without Genoa, if we are not the ones that wreck Genoa. We must work out cleverer maneuvers so that we are not the ones that wreck Genoa. For example, "the fool Henderson and Co. will help us a lot if we cleverly prod them". ...

Everything is flying apart for "them". It is total bankruptcy (India and so on). We have to push a falling one unexpectedly, not with our hands."

(Emphasis added.) There is no information as to whether Lenin's disparaging comments about Arthur Henderson have some relation to the coining of the phrase "".

In 1929, Labour formed another minority government, and MacDonald appointed Henderson as Foreign Secretary, a position Henderson used to try to reduce the tensions that had been building up in Europe since the end of the War. Diplomatic relations were re-established with the USSR and the was given Britain's full support. The government was able to function properly, even without a parliamentary majority. However this did not last. The plunged the government into a terminal crisis.

The crisis began in 1931 when a key committee discovered that the budget was facing a serious deficit. This generated a crisis of confidence in the British financial system which threatened the Pound's position on the . The Labour Cabinet agreed that it was essential to maintain the Gold Standard and that the Budget needed to be balanced, but divided seriously over some of the measures proposed. Henderson found himself at the head of a minority of nearly half the Cabinet who could not accept a cut in . With the Cabinet so clearly divided it decided to resign office. On 24 August 1931 it was announced the MacDonald was forming an emergency National Government with members of all parties in order to tackle the crisis. However the Labour Party repudiated this government, and the National Executive expelled from the party MacDonald and all other Labour members who supported him (Henderson cast the only vote against this). Henderson now became leader of the party as it became ever more hostile to the Government. With the economic and political situation still uncertain, the National Government decided to call a general election, and in the largest landslide in British political history, it won an overwhelming majority. Labour was reduced to just 46 MPs, and yet again Henderson lost his seat. The following year he relinquished the party leadership.

Henderson returned to Parliament after winning a by-election (Clay Cross), and spent the rest of his life trying to halt the gathering storm of war. He chaired the and was awarded the in 1934.

Arthur Henderson died aged 72 in 1935. Two of his sons also became Labour politicians. His second son William was created in 1945 while his third son Arthur was made Baron Rowley in 1966.