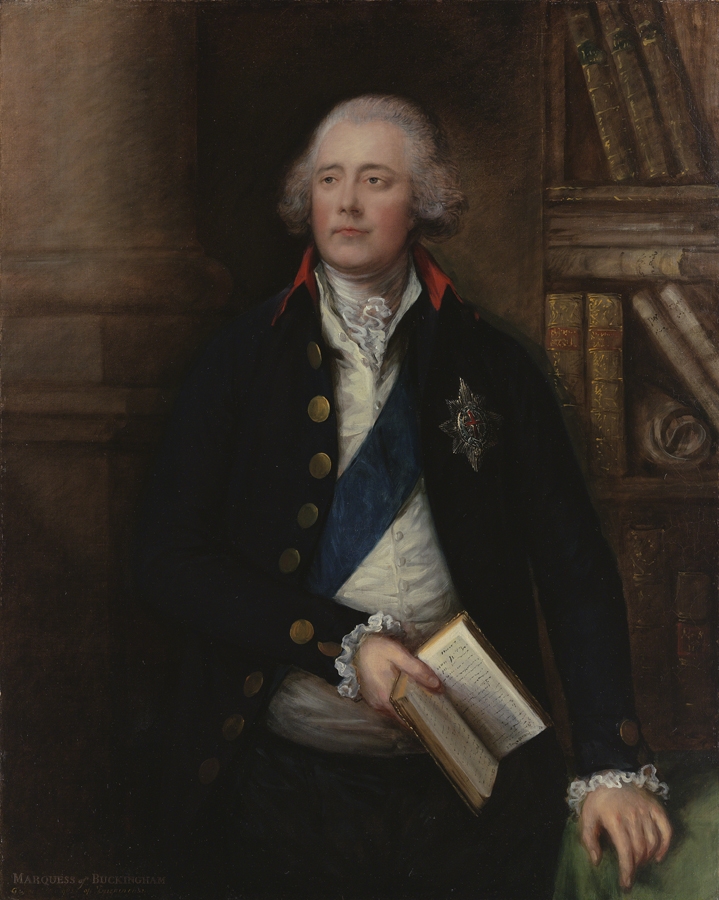 George Nugent-Temple-Grenville, 1st Marquess of Buckingham ( &ndash; ) was a British statesman; he was the second son of and a brother of the 1st Baron Grenville.

Educated at and , he was appointed a Teller of the in , and ten years later was returned to Parliament as one of the Members for . In the House of Commons he was a sharp critic of the American policy of Lord North. In September he succeeded his uncle as Earl Temple; in was appointed ; and in July of the same year became a member of the Privy Council and in the Ministry of Lord Shelburne. On his advice the was passed, which supplemented the legislative independence granted to Ireland in . By Royal Warrant he created the in February , with himself as the first Grand Master. Lord Temple left Ireland in 1783, and again turned his attention to English politics. He enjoyed the confidence of King George III, and having opposed Fox's , he was authorized by the King to say that "whoever voted for the India Bill was not only not his friend, but would be considered by him as an enemy", a message which ensured the defeat of the Bill. He was appointed a when the younger Pitt formed his Ministry in December 1783, but resigned two days later. In December he was created Marquess of Buckingham.

In November he was appointed Lord Lieutenant of Ireland under Pitt, but his second tenure of this office was hardly as successful as the first. He was denounced by Grattan for extravagance; was censured by the Irish Houses of Parliament for refusing to transmit to England an address calling upon the Prince of Wales to assume the regency; and he could only maintain his position by resorting to bribery on a large scale. Having become very unpopular he resigned his office in September and subsequently took very little part in politics, although he spoke in favour of the union with Ireland. He died at his residence, Stowe in , on , and was buried at Wotton.

In he had married Lady Mary Nugent, daughter of the 1st Viscount Clare (later the 1st Earl Nugent), whom he succeeded as Earl Nugent in . Lady Buckingham died in .

tyles from birth to death