Uranium trioxide (UO3), also called uranyl oxide, uranium(VI) oxide, and uranic oxide, is the hexavalent oxide of uranium. The solid may be obtained by heating uranyl nitrate to 400 °C. Its most commonly encountered polymorph, γ-UO3, is a yellow-orange powder.

There are three methods to generate uranium trioxide. As noted below, two are used industrially in the reprocessing of nuclear fuel and uranium enrichment.

Uranium trioxide is shipped between processing facilities in the form of a gel.

It has been reported that the corrosion of uranium in a silica rich aqueous solution forms both uranium dioxide and uranium trioxide.[4] In pure water, schoepite (UO2)8O2(OH)12·12(H2O) is formed[5] in the first week and then after four months studtite (UO2)O2·4(H2O) was produced. Reports on the corrosion of uranium metal have been published by the Royal Society.[6][7]

Like all hexavalent uranium compounds, UO3 is hazardous by inhalation, ingestion, and through skin contact. It is a poisonous, slightly radioactive substance, which may cause shortness of breath, coughing, acute arterial lesions, and changes in the chromosomes of white blood cells and gonads leading to congenital malformations if inhaled.[8][9] However, once ingested, uranium is mainly toxic for the kidneys and may severely affect their function.

The only well characterized binary trioxide of any actinide is UO3, of which several polymorphs are known. Solid UO3 loses O2 on heating to give green-colored U3O8: reports of the decomposition temperature in air vary from 200–650 °C. Heating at 700 °C under H2 gives dark brown uranium dioxide (UO2), which is used in MOX nuclear fuel rods. 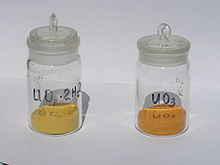 Hydrous and anhydrous forms of UO3

It is possible by bond valence calculations[17] to estimate how great a contribution a given oxygen atom is making to the assumed valence of uranium.[18] Bond valence calculations use parameters which are estimated after examining a large number of crystal structures of uranium oxides (and related uranium compounds), note that the oxidation states which this method provides are only a guide which assists in the understanding of a crystal structure.

The formula to use is

The sum of the s values is equal to the oxidation state of the metal centre.

For uranium binding to oxygen the constants RO and B are tabulated in the table below. For each oxidation state use the parameters from the table shown below.

It is possible to do these calculations on paper or software.[19][20]

While uranium trioxide is encountered as a polymeric solid under ambient conditions, some work has been done on the molecular form in the gas phase, in matrix isolations studies, and computationally.

At elevated temperatures gaseous UO3 is in equilibrium with solid U3O8 and molecular oxygen.

Infrared spectroscopy of molecular UO3 isolated in an argon matrix indicates a T-shaped structure (point group C2v) for the molecule. This is in contrast to the commonly encountered D3h molecular symmetry exhibited by most trioxides. From the force constants the authors deduct the U-O bond lengths to be between 1.76 and 1.79 Å (176 to 179 pm).[23]

The calculated geometry of molecular uranium trioxide has C2v symmetry.

Calculations predict that the point group of molecular UO3 is C2v, with an axial bond length of 1.75 Å, an equatorial bond length of 1.83 Å and an angle of 161 ° between the axial oxygens. The more symmetrical D3h species is a saddle point, 49 kJ/mol above the C2v minimum. The authors invoke a second-order Jahn-Teller effect as explanation.[24]

Uranium trioxide reacts at 400 °C with freon-12 to form chlorine, phosgene, carbon dioxide and uranium tetrafluoride. The freon-12 can be replaced with freon-11 which forms carbon tetrachloride instead of carbon dioxide. This is a case of a hard perhalogenated freon which is normally considered to be inert being converted chemically at a moderate temperature.[25]

Uranium trioxide can be dissolved in a mixture of tributyl phosphate and thenoyltrifluoroacetone in supercritical carbon dioxide, ultrasound was employed during the dissolution.[26]

It has been the case that it is possible to insert lithium[28][29][30] into the uranium trioxide lattice by electrochemical means, this is similar to the way that some rechargeable lithium ion batteries work. In these rechargeable cells one of the electrodes is a metal oxide which contains a metal such as cobalt which can be reduced, to maintain the electroneutrality for each electron which is added to the electrode material a lithium ion enters the lattice of this oxide electrode.

Amphoterism and reactivity to form related uranium(VI) anions and cations

Uranium oxide is amphoteric and reacts as acid and as a base, depending on the conditions.

Dissolving uranium oxide in a strong base like sodium hydroxide forms the doubly negatively charged uranate anion (UO2−
4). Uranates tend to concatenate, forming diuranate, U2O2−
7, or other poly-uranates. Important diuranates include ammonium diuranate ((NH4)2U2O7), sodium diuranate (Na2U2O7) and magnesium diuranate (MgU2O7), which forms part of some yellowcakes. It is worth noting that uranates of the form M2UO4 do not contain UO2−
4 ions, but rather flattened UO6 octahedra, containing a uranyl group and bridging oxygens.[31]

Dissolving uranium oxide in a strong acid like sulfuric or nitric acid forms the double positive charged uranyl cation. The uranyl nitrate formed (UO2(NO3)2·6H2O) is soluble in ethers, alcohols, ketones and esters; for example, tributylphosphate. This solubility is used to separate uranium from other elements in nuclear reprocessing, which begins with the dissolution of nuclear fuel rods in nitric acid. The uranyl nitrate is then converted to uranium trioxide by heating.

UO3-based ceramics become green or black when fired in a reducing atmosphere and yellow to orange when fired with oxygen. Orange-coloured Fiestaware is a well-known example of a product with a uranium-based glaze. UO3-has also been used in formulations of enamel, uranium glass, and porcelain.

Prior to 1960, UO3 was used as an agent of crystallization in crystalline coloured glazes. It is possible to determine with a Geiger counter if a glaze or glass was made from UO3.