Murdoch University is a public university based in Perth, Australia. It began operations as the state's second university in 1973, and accepted its first students in 1975. Its name is taken from Sir Walter Murdoch (1874–1970), the Founding Professor of English and former Chancellor of The University of Western Australia.

According to The Australian newspaper ("What makes a good school of journalism"), Graduate Careers Council of Australia found its Journalism School is one of Australia's top five.[1] 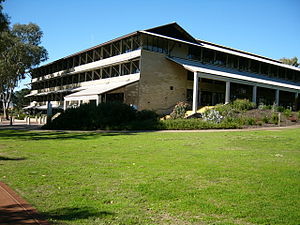 Murdoch University is home to over 18,500 students including 3,000 international students from over 100 different countries.[3]

Murdoch University partners with other educational institutions, such as KDU University College in Malaysia, to provide university degrees to off-shore students.

There are four faculties and fourteen schools at Murdoch University:[5]

Of the areas of research carried out at Murdoch that were assessed for the Excellence in Research for Australia exercise in 2010, five were rated 5, defined as 'well above world standard': Physical Chemistry (including Structural); Crop and Pasture Production; Resources Engineering and Extractive Metallurgy; Immunology; Medical Microbiology.

The Asian Research Centre, founded in 1991, produces multi-disciplinary research in politics, political economy, modes of governance, social change and policy making. Its distinctive contribution to the research debate is based on the proposition that these factors have their roots in broader processes of conflict and change in society that are connected to the advance of market economies. [6]

The original group of buildings surround an open court, known as "Bush Court", in the northern part of Murdoch campus, which rises to the highest altitude on campus. Features of the campus include the Chinese garden and the Joglo Rahayu (Peace Pavilion), a semi-enclosed pavilion near the Education and Humanities building. A monument to the ongoing association between Murdoch University and Indonesian academic institutions in Java, it acts as storage for the only gamelan orchestra in Western Australia.[citation needed]

Rockingham Regional Campus Community Library, located at the Rockingham Campus, is a joint venture between the university, the City of Rockingham and Challenger Institute of Technology. Members of all of these groups have free access to library membership.

Membership entitles all patrons to access to Challenger Institute of Technology, university and public library resources at Rockingham.[8]

The International Study Centre in Dubai is a Branch Campus of Murdoch University in Perth, Western Australia.

The campus was established in 2008 in Dubai International Academic City to cater for the expanding Dubai Media and Financial sectors, and support Dubai’s ambitions in providing an ongoing reserve of regional graduates connected to the demands of the region’s booming industries.

In his inaugural speech, H.E. Sheikh Nahayan Bin Mubarak Al Nahayan, Minister of Higher Education and Scientific Research, stressed the importance of opening new world class universities in the UAE to support the country’s efforts to drive higher education in the region to world class standards.

The Study Centre features courses in the areas of media and mass communication and provides access state of the art TV and radio studios, newsrooms, editing suites, digital postproduction facilities.

Headed by a Murdoch Academic Dean, the Centre is a partnership with the Singapore Manufacturer’s Federation Institute of Higher Learning and has more than 1,000 undergraduate and postgraduate students studying media, information technology and business courses.

MUISC Singapore is located at the SMa Institute of Higher Learning City Campus at North Bridge Road, and is conveniently situated opposite the Singapore National Library. It spans six floors of prime city space, and includes classrooms, computer laboratories, a library and a newsroom for journalism students.

Murdoch Guild is the peak student representative body at Murdoch University. As such, it represents the interests of students to the University, all levels of government and the wider community, as well as providing services to students.

As well as handling student representation and assistance with education and welfare issues, the Guild runs two food outlets on campus, runs the tavern, sports and recreation centre and the second-hand bookshop. The guild partially finances many of the student associations on campus and run specific guild events of their own. The Guild also publishes Metior, the campus magazine.

The Guild is the recognised channel of communication between the student body and the University Administration and has representatives on a vast array of the University's committees where the interests of students are involved.

The Guild is governed by a Council of eighteen students elected for one-year terms at the annual elections. Student representatives are elected to their positions by students in annual elections held in September. Both independent and party candidates run in the elections, with a historical bias leaning towards grouped members. In 2011 the Guild President is Brodie Lewis; the Education Vice President is Rebecca Leighton.[9]

The Guild is affiliated with the National Union of Students.

Formed officially in 2008, the Mandurah Students' Association is the official Guild body representing students at the Mandurah Campus.

The Murdoch Institute of Technology (MIT) was established by the university and the Alexander Education Group. It is a feeder college catering for students wishing to complete diploma level courses. Future plans involve building dedicated facilities on the tennis courts north of the SSHE building, which currently houses the School of Education's teaching caravans and some satellite dishes.

On the north east corner of the South Street campus, Murdoch College was established by the university and the Alexander Education Group in 2000 to cater for secondary students in a university environment and to enrich their academic, social and personal potential. It is one of few secondary schools on a university campus in Australia. It offers a complement of Year 7–12 subjects across the 8 learning areas. Many students from China, Hong Kong, Singapore, Japan and Korea enrol at Murdoch College and enhance its multicultural ethos. The college manages to achieve decent matriculation scores as they engage in a practice common to most private colleges where non-academic students are discouraged from taking end of year exams.

Murdoch campus is approximately 800 metres from Murdoch Train Station, and is linked by bus services. The CircleRoute bus service travels from the campus to Fremantle and other suburban centres.