The University of Sydney Union provides student services and amenities and supports the university's strong debating, dramatic, and cultural traditions, through over 200 clubs and societies. It is the 2007 World Debating Champion and 2008 Australasian Debating Champion, and in recent years has dominated the finals of the Australian and Australasian Championships. Former debaters include the former Prime Minister John Howard and Justice Michael Kirby.

The Sydney University Union (SUU) was established in 1874 for debating, at a time when the University had fewer than a hundred students; graduates and staff were thus dominant. In 1884, the University's Senate provided a common room for the union, and in 1906, it decided to provide a building for the union's use. This building is now known as the Holme Building.

A separate Sydney University Women's Union (SUWU) was formed in 1914. The Senate also agreed to fund a building for the Women's Union; Manning House was opened in 1917. It was at this time that the University made membership of one of the two Unions compulsory.

Until the 1970s, the Unions' headquarters were an important meeting place for staff and students; however, with the establishment of a University of Sydney staff club and the growth in size of the university population, the influence of staff in the activities of the Student Union decreased. The amalgamation of the two student unions came after the decision in 1971 to jointly fund the construction of the Wentworth Building, named after William Wentworth, one of the leading figures in the colony of New South Wales. The two unions amalgamated on 1 January 1972 to form the University of Sydney Union (USU).

The USU operates numerous programs, from facilities in located in three main buildings, Manning House, and the Wentworth and Holme Buildings. These buildings house the large proportion of the university's catering outlets, and provide space for retail outlets, an art gallery, meeting rooms, student lounges, game rooms, bars and function centres. One of the more prominent activities organised by the union is the Orientation Week (or "O-week") program, centering on stalls set up by Clubs and Societies. The clubs and societies programme is a key part of the union's activities, with over two hundred clubs to cater for the university's diverse student population. The union also has an extensive art collection, and until 2006, it maintained the Sir Hermann Black Gallery. In July 2009, the Verge Gallery opened in the Jane Foss Russell Plaza as a new student art space on main campus.

Today, the union is operated as a business, with a board of directors elected by the students at the university. Consisting of 14 members, the board is composed of: 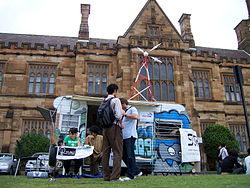 The magazine Hermes was first published in 1886, and the Union Recorder was first published in 1921. At least in recent years, the Recorder has been a monthly publication; however, due to rationalisation in the face of VSU, it was announced in the November 2005 issue that it would become an annual publication as of 2006[update], with The Bull taking its place as the primary repository of student content.

For one month during each semester, USUFM broadcasts from a studio on campus on the 90.9FM frequency. The union is issued a Temporary Community Broadcast License which allows them to broadcast at full power to most of metropolitan Sydney. The USUFM license is administered by the Sydney University Radio Group (SURG), which is funded through the Clubs and Societies programme. Like The Bull, USUFM is wholly staffed and operated by University of Sydney students. All content is provided by students and members of SURG[3]

Notable past Presidents & Office Bearers of the University of Sydney Union include: