Ordu
Not to be confused with Urdu language.

'Ordu' means "Army" or "Military encampment" and stems from the same Turkic root as 'Urdu', and appears in modern English as horde. Antique name of the city is Kotiora means "Potter" in Laz language suggested by Özhan Öztürk.[1] 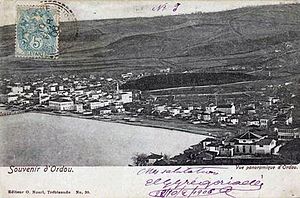 In the 8th century BCE the settlement of Cotyora was founded in this area as one of a string of colonies along the Black Sea coast established by the Miletus. The area came under the control of the Danishmends, then the Seljuk Turks in 1214 and 1228 and Haci Emir Ogulları Beyligi in 1346. Afterwards it passed to the dominion of the Ottomansin 1461 with the Empire of Trabzon[2].

The modern city was founded by the Ottomans as Bayramlı near Eskipazar as a military outpost 5 km west of Ordu. The Ordu Municipality Black Sea Theater Group, one of the first Turkish theaters outside of major cities, was founded in 1964 by Muhsin Ertuğrul. In 1869, the name was changed to Ordu and united with the districts of Bolaman,Perşembe, Ulubey, Hansamana (Gölköy) and Aybastı. Ordu province was created at 17 April 1920 [3]. In 1924, Atatürk visited Ordu as part of his Black Sea Tour. 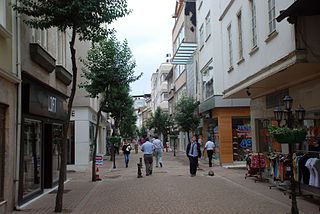 The Sağra factory shop, selling many varieties of chocolate-covered hazelnuts, is one of the town's attractions.

The Boztepe aerial tramway is another popular attraction which is set to become a modern symbol for the city.

Local music is typical of the Black Sea region, including the kemençe. The cuisine is primarily based on local vegetables and includes both typical Turkish dishes - such as pide and kebab- and more unique fare - such as plain or caramel 'burnt ice-cream'.

Ordu has a borderline oceanic/humid subtropical climate (Köppen climate classification: Cfb/Cfa); like most of the eastern Black Sea coast of Turkey; with warm and humid summers and cool and damp winters. Ordu has a high and evenly distributed precipitation throughout the year. Precipitation is heaviest in autumn and spring.

Snowfall is quite common between the months of December and March, snowing for a week or two, and it can be heavy once it snows.

The water temperature, like in the rest of the Black Sea coast of Turkey, is always cool and fluctuates between 8° and 20°C throughout the year.