Mersey Beat
This article is about the publication. For other uses, see Mersey sound (disambiguation). 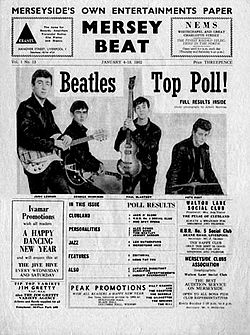 Mersey Beat was a music publication in Liverpool, England in the early 1960s. It was founded by Bill Harry, who was one of John Lennon's classmates at Liverpool Art College. The paper carried news about all the local Liverpool bands, and stars who came to town to perform.

The Beatles had a close association with Mersey Beat, which carried many exclusive stories and photos of them. They also published several of Lennon's early writings, including a history of the band, and occasional comical classified advertisements by him as space filler.

In 1962, Mersey Beat held a poll to find out who was the most popular Merseyside group. The results were announced on 4 January 1962:

The results were printed in issue 13 of Mersey Beat on 4 January 1962, with the front page announcing, “Beatles Top Poll!”[6][7] Paul McCartney supplied the issue's cover photograph, which was taken by Albert Marrion.[8]

Such was the popularity of the poll, Rushworth's music store manager, Bob Hobbs, presented Lennon and George Harrison with new guitars.[9] Many groups in Liverpool complained to Harry that his newspaper should be called Mersey Beatles, as he featured them so often.[10]

The Stern magazine in Germany phoned Harry and asked if he could arrange a photograph of all the groups in Liverpool. Harry suggested Kirchherr (then Sutcliffe's girlfriend) be the photographer, who would stand on a crane to take the photograph.[11] Virginia phoned every group in Liverpool and arranged for them all to turn up on the same day at St. George's Hall. Kirchherr and Max Scheler said that every group would be paid £1 per musician, but over 200 groups turned up on the day, and Kirchherr and Scheler ran out of money as a result.[12]

Another of the paper's noted supporters was Brian Epstein, the future Beatles' manager, who wrote a regular column about new record releases available at NEMS Enterprises.