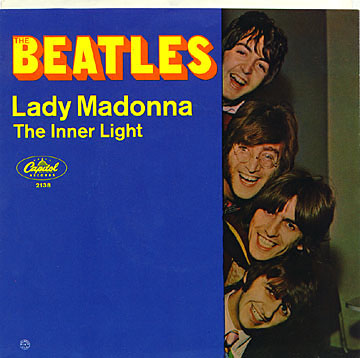 "Lady Madonna" is a song by , written mostly by and credited to . In March 1968 it was released as a single, backed by "The Inner Light". The song was recorded at during sessions on and before the Beatles left for . This single was the last release by the band on in the UK, where it reached #1, and in the U.S., where it reached #4. All subsequent releases, starting with "" in August of 1968, were released on their own label , under distribution, until the late 1970s, when Capitol and Parlophone re-released old material.

The piano playing on this song was inspired by 1950s rock/blues pianist, . McCartney recalled in 1994, "'Lady Madonna' was me sitting down at the piano trying to write a bluesy boogie-woogie thing ... It reminded me of Fats Domino for some reason, so I started singing a Fats Domino impression. It took my voice to a very odd place."

The song and in particular the introduction are similar to 's "" from 1956.

The solo was played by British jazz musician and club owner . The mix used in the single had much of Scott's saxophone removed, but the versions on and Love feature a more prominent use of Ronnie's solo, at the end of the song. In a recent documentary, Timewatch, McCartney explained the decision behind this saying that at the time, Scott had not been impressed that his music had been hidden behind other instruments, so McCartney had decided to fix it with the most recent mix.

A variation of this song can be heard on McCartney's "" (PBS Great Performances). McCartney calls it "An Old Lady in New Clothes".

A remixed version of this song was featured in the show "LOVE". In this form, the saxophone solo is played almost un-accompanied at the very beginning of the song. After the first two verses, it changes to the riff from "" in A minor, with a remixed version of the solo from "". It then returns to the original form of the song, and at the very end a saxophone solo outro is played.

* covered the song in 1968. McCartney says he may have told that it was "based on Fats," leading to Domino's version.

*"Lady Madonna" was performed by n band Phoenix on their first EP, "Vremuri" ("Old times", 1968). The studios didn't trust the sales success of the band's own songs ("Vremuri" and "Canarul"). This was a common practice in and the predominant way western music was reaching there officially.

*"Lady Madonna" was covered twice by Norwegian musician , including a bluegrass instrumental version.

* did a Punk cover of this song on their second album "Punk!".

* has a mashed song named "Leper Madonna" which is a combination between "Lady Madonna" and 's "Leper Messiah". It's included on their album Beatallica, also known as "The Grey Album".

* It was used as the opening theme song on the "" for several seasons.