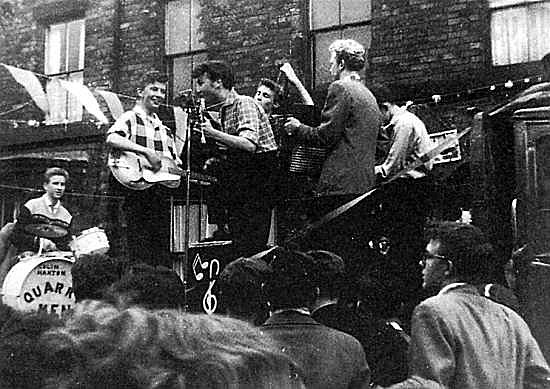 The Quarrymen (circa late 1956—October 1959/1997—present) are an English band that was formed in in the latter part of 1956, by and several school friends. The band's name was inspired by the name of the Quarry Bank High school, which Lennon and other band members attended. Lennon's mother, , taught Lennon and how to tune their guitars the same way as a , taught them simple chords, and songs.

After starting a band called The Blackjacks, suggested renaming themselves The Quarrymen, after a line in the Quarry Bank school's song. The Quarrymen played at parties, school dances, a cinema, and amateur skiffle contests before joined the band. only joined the band at McCartney's insistence, as Lennon thought Harrison to be far too young. Their first recording on disc was "" (by ) and "" (by McCartney and Harrison).

After joined he suggested renaming them The Beatals, but they changed the name to The Silver Beetles, and then The Silver Beats, before finally changing it to in 1960. At the 40th anniversary of the first meeting of Lennon and McCartney, five of the original Quarrymen, (Griffiths, Shotton, Rod Davis, Len Garry, John Duff Lowe, and ) reunited to play together at the St. Peter's Church garden , which was where Lennon and McCartney first met. The Original Quarrymen still continue to tour internationally with occasional guest performers.

In the mid-1950s, British teenagers became attracted to a musical form peculiar to Britain known as skiffle music. Its primary attraction was that it did not require great musical skills or expensive instruments to be played. Early British skiffle was played by musicians, but the most successful British proponent of skiffle in the 1950s was .

Lennon started his own skiffle band with Griffiths in late 1956, and recruited his best friend, Shotton, even though Shotton could not play any instrument. [ [http://www.allmusic.com/cg/amg.dll?p=amg&sql=11:995j8qmtbtn4 AMG biography] Retrieved: 29 January 2007 ]

The band first rehearsed in Shotton's house on Vale Road, but because of the noise his mother told them to use the corrugated air-raid shelter in the back garden. Smith rarely turned up for rehearsals and decided to leave the band, and was replaced by Garry, but not before Lennon and Shotton had broken into Smith's parents' garage and "liberated" the washtub bass. Garry later used a for performances, and Lennon's friend, , sometimes played at rehearsals when Garry was not available.

Whilst playing golf with Dr. Joseph Sytner, Whalley—who had left school at 15 to become an apprentice golf professional at the Lee Park Golf Club—asked Dr. Sytner if his son, Alan, could book The Quarrymen at , in , which was one of three jazz clubs he managed. Sytner suggested that the band should play at the golf club first, so as to assess their talent.

Before The Cavern club performance the band argued amongst themselves about the set list, as rock 'n roll songs were definitely not allowed at the club, but skiffle was tolerated. After starting with a skiffle song, Lennon called for the others to start playing "", but Davis warned Lennon that the audience would "eat you alive", which Lennon ignored and started playing it himself, forcing the others to join in. Halfway through, Sytner pushed his way through the audience and handed Lennon a note which read, "Cut out the bloody rock 'n roll".

On Saturday 6 July 1957, The Quarrymen played at St. Peter's Church "Rose Queen" garden fête, first playing at two o'clock on the back of a moving flatbed truck, in a procession of other floats driving around Woolton that carried the Rose Queen (Sally Wright, and Susan Dixon, whose reign was ending) , , , and Cubs, with the Band of the Cheshire Yeomanry leading the procession.

McCartney returned from holiday and started rehearsing with The Quarrymen, playing songs like, "" (The Everly Brothers) and "", which Lennon and the band had been trying to learn, without success.

The Quarrymen played The New Clubmoor Hall on 10 January 1958 and at The Cavern on 24 January. McCartney's school friend, Harrison (from a year below at the Liverpool Institute, which they both attended) first saw the band perform on 6 February at Wilson Hall.

In March, Garry contracted , and spent seven months in hospital, but never played with the band again. Sometime later McCartney played his first song, "I've Lost My Little Girl", to Lennon, who was shocked and impressed, according to Shotton's account.

Griffiths joined the after leaving the band—visiting ports in South America and Canada—and upon his return to Liverpool he would either sell or swap records by Buddy Holly or with Lennon or McCartney.

Percy Phillips' operated a studio called between the kitchen and a front room that served as an electrical goods shop at 38 Kensington, Liverpool.

The Quarrymen booked the studio, but when Lennon, McCartney, Harrison, Lowe and Hanton arrived they were surprised to see how small and technically basic it was, with one solitary microphone in the centre of the room.

The Quarrymen to The Beatles

Lennon's mother, Julia, was killed in a road accident on 15 June 1958, and Lennon lost interest in the band for months.

After the success of the first night, Mona gave The Quarrymen a residency, but as there was no amplification, Lennon persuaded Mona to hire a young amateur guitar player called Harry to play a short set before The Quarrymen, but this was only so they could use his 40-Watt amplifier.

After talking to Sutcliffe one night at The Casbah Coffee Club, Lennon and McCartney persuaded him to buy a 500/5 bass—known in Europe as a "President" bass—with the money he had won in the John Moore art exhibition.

Lowe and Davis reformed as a band for a short time in the 1990s, and an album, entitled "Open for Engagements", was self-released in 1994; the album title was a reference to the posters that were used to advertise The Quarrymen in their early years.

40th anniversary of the first meeting of Lennon & McCartney

The 40th anniversary event was initiated and primarily organized by Jean Catharell, the head of Liverpool Beatlescene fan club.

Griffiths, Shotton, Davis, Garry, and Hanton reunited for the occasion and undertook rehearsals in Liverpool in early June. The re-creation of the events from 1957 included a midday procession through the village with the band playing on the back of a flatbed lorry, which was driven by the same driver who had performed this task in 1957. A faithful re-creation of the afternoon concert behind the church featured The Quarrymen performing many of the same songs they had performed in 1957.

Following the success of the event, all five original surviving Quarrymen (Shotton, Griffiths, Davis, Garry and Hanton) recorded an album "Get Back - Together", which was released in September 1997.

Griffiths died from cancer on 29 January 2005, after complaining about a back problem that turned out to be cancer of the pancreas. He died at his home in Edinburgh.