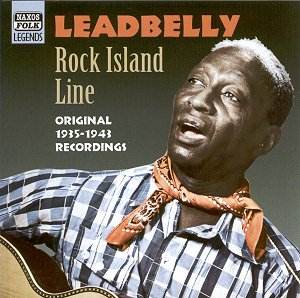 "Rock Island Line" is an American /folk song performed and first recorded by in the 1930s. Versions have been recorded by other artists. The song is ostensibly about the .

The chorus to the old song reads:

The verses tell a humorous story about a train operator who smuggled through a toll gate by claiming all he had on board was .

According to Harry Lewman Music,

* 's recording, released in 1955, signalled the start of the UK "" craze. Donegan "did nothing to credit Lead Belly as the author, even though he simply copied Huddie's entire arrangement". [Ibid., Harry Lewman Music] However, although it only featured Donegan, Chris Barber on double bass and player (Beryl Bryden), it was a band recording so he made no money from it beyond his original session fee.

* recorded a version while he was chopping , to demonstrate its origins. [Ibid., Harry Lewman Music]

"Rock Island Line" has been recorded by:

* recorded the song at on June 22, 1937, the first of many recordings of it he made during his career, the last being live at the University of Texas on June 15, 1949. [ [http://cycad.com/cgi-bin/Leadbelly/discog/ The Leadbelly Web Discography] ]
"Rock Island Line" appears in the Lead Belly compilation "" (released 2003 [http://www.allmusic.com/cg/amg.dll?p=amg&sql=10:5lfjzfa7eh2k] ), among many others.

* 's recording of "Rock Island Line" was featured in an advert for the Vauxhall Astra Twintop and Tigra in 2006 in the UK.