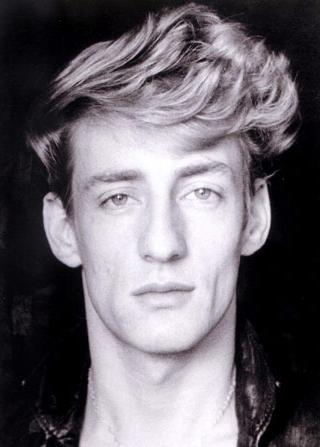 Rory Storm (21 September 1939 - 28 September 1972) was an English singer and musician. He was born Alan Caldwell in . Storm was the singer and leader of Rory Storm and The Hurricanes, a band who were contemporaries of in the late 1950s, and early 1960s. was the for The Hurricanes before joining The Beatles in August 1962.

The Hurricanes were one of the most popular acts on the Liverpool and club scenes during their existence, although their attempt at a recording career was not successful. They released only two singles, the second one being a version of the "" song "America", which was produced by The Beatles' manager .

When Storm's father died, he returned from Amsterdam to Liverpool to be with his mother at "Stormsville", at 54 Broadgreen Road, , Liverpool. On 27 September 1972, Storm developed a chest infection and could not sleep properly, so he took sleeping pills. The next day Storm and his mother were both found dead. A revealed that Storm had not taken enough pills to kill himself, but it was suspected that his mother had, after finding her son's body.

Rory Storm was born Alan Caldwell in 21 September 1939, in Oakhill Park Estate, Stoneycroft, Liverpool, to Ernie and Vi (Violet) Caldwell. His father was a by profession, and a part-time porter at the Broad Green Hospital, often singing songs to patients.

Storm's first name for a group was Dracula & the Werewolves, but later settled on Al Caldwell's Texans.

Storm went to , on 11 April 1958, to participate in a competition. During his stay he took part in a at 's Skiffle Cellar, which resulted in an appearance on 30 April 1958, on Radio Luxembourg's Skiffle club programme playing "Midnight Special". In 1959, Storm's group consisted of himself on guitar and vocals, Johnny 'Guitar' Byrne (guitar/vocals) Paul Murphy (guitar/vocals) Reg Hales () and Jeff Truman (). 'Spud' Ward, a former member of , later played bass guitar. Storm met Ringo Starr at a talent contest called '6.5 Special'. Starr had previously played with The Eddie Clayton Skiffle Group and was then drumming with a group called Darktown Skiffle. Starr's first concert with Storm was on 25 March 1959, at the Mardi Gras in Mount Pleasant, Liverpool.

Rory Storm and The Hurricanes

Storm and The Hurricanes performed at The on 3 May 1960, on the same bill as . became interested in The Hurricanes, and invited them to audition at the Wyvern Club as a backing group for . Storm turned up at the audition, but only so he could have his picture taken with Fury. In July 1960, the group secured a residency at holiday camp in (playing in the Rock 'n' Calypso Ballroom) for £25 each per week. Starr was not sure about giving up his job as an apprentice at Henry Hunt's, where he made climbing frames for schools, until Storm put forward the idea of "Starr-time" (a solo spot) with Starr singing songs like "Boys" by .

After playing for more than 16 hours per week, the group were contacted by , who wanted them to go to . Derry and The Seniors were successful there, and Williams wanted an additional group.

The stage of the Kaiserkeller was made of planks of wood balanced on the top of beer crates, so the two groups made a bet to see to who would be the first to break it.

During their eight-week residency Williams arranged a recording session at the Akoustik Studio, which was a small booth on the fifth floor of 57 Kirchenalle (The Klockmann-House) on Saturday 18 October 1960. Williams asked Lennon, McCartney, and Harrison from The Beatles to play and sing harmonies for Walters (of The Hurricanes) on the recording. (The Beatles' regular drummer at the time) was in town buying drumsticks, so Starr played drums, which was the first time all four (Lennon, McCartney Harrison and Starr) played and recorded together. [ [http://www.beatlesource.com/bs/ao-smrtime.html Lou Walters' recording session] Retrieved: 29 January 2007] They recorded three songs: "Fever", "" and "Summertime".

Storm and The Hurricanes were the headlining group at the first "Beat Night", in the Orrell Park Ballroom, in March 1961. They were also invited for a season at the Butlins camp in in . Sam Leach (a Liverpool promoter) arranged a series of dance nights at the Palais Ballroom in , starting on 9 December 1961. The first featured The Beatles, but as the local newspaper forgot to run the advertisement only 18 people turned up. The second Saturday was arranged for Rory Storm and The Hurricanes to perform, and as it was advertised this time, 210 people paid to get in. Leach's idea was to attract London agents to watch the series of concerts, but when he realised they would never travel out of London he abandoned the idea.

Starr considered leaving Storm at that time to join Derry and The Seniors, but accepted a job with Sheridan at the Top Ten Club on 30 December 1961, as Sheridan's offer of more money, a flat and a car was too good to refuse. Starr's stay with Sheridan was short-lived, as he found Sheridan's habit of changing the set list without telling his backing group beforehand frustrating, so he rejoined The Hurricanes. On 5 February 1962, Best fell ill and The Beatles had to play a lunchtime concert at the Cavern and an evening concert at the Kingsway club in . As The Hurricanes had no concert that day Starr played with them live on stage for the first time (although he had recorded with them in Hamburg).

During a Hurricanes' residency at Butlins, Lennon and McCartney drove from Liverpool to Skegness, on 15 August 1962, to ask Starr to join The Beatles.

Despite Starr joining The Beatles, both groups would perform on the same bill during 1961, and at many concerts thereafter.

When Storm became a professional singer, he changed his name to Rory Storm by , and changed the name of his family's home in Broadgreen to "Stormsville". Storm was known for the extravagant clothes he wore and the cars he drove, once buying a pink for £800 in cash. A young man was once caught by a porter at railway station writing "I love Rory" over the walls, and when questioned, it turned out to be Storm himself. The Hurricanes wore matching suits on stage, but Storm wore a pink suit and pink tie, and during concerts he would walk over to the piano and comb his blond hair with an oversized comb.

Rod Punt (also known as Steve Day in Steve Day & the Drifters) remembered Storm arriving at the Orrell Park Ballroom for a concert with a on his face. When told about it, Storm pulled out a black velvet hood which had slits for his eyes and mouth, and played the whole concert with the hood on. At one concert at Bankfield House Youth club, Garston, Liverpool, in 1965, the stage lighting failed between sets. Storm was upset until someone walked in with a big , which Storm used to finish the concert. Storm used a pet monkey in some of the group's performances, as it attracted more people.

Storm and The Hurricanes received the most votes in the first Mersey Beat magazine , but many votes were disqualified as they had been posted from the same place at the same time, and were written in green ink. (Although never proven, it was thought that Storm had posted the votes).

In 1967, O’Brien (26) collapsed on stage during a performance, and later died due to complications after an operation.

Fury, whom Storm had met at the Wyvern Club auditions, later played the part of a singer called Stormy Tempest in the film, "That'll Be the Day (1973) which was based on Storm. In 1987, a musical was staged in Liverpool about Storm and The Hurricanes called "A Need For Heroes".