The de Havilland Goblin, originally the Halford H-1, is an early turbojet engine designed by Frank Halford. The Goblin built by de Havilland was the second British jet engine to fly, and the first to pass tests and receive a "Gas Turbine" class type rating.[1]

The Goblin was the primary engine of the de Havilland Vampire, and was to have been the engine for the F-80 Shooting Star (as the Allis-Chalmers J36) before that design switched engines due to production delays. The Goblin also powered the Saab 21R, Fiat G.80 and de Havilland Swallow. The Goblin was later expanded into the larger de Havilland Ghost, with the model numbers continuing from the last marks of the Goblin.

Design of the engine was carried out by Frank Halford at his London consulting firm starting in April 1941.[2] It was based on the basic design pioneered by Frank Whittle, using a centrifugal compressor providing compressed air to sixteen individual flame cans, from which the exhaust powered a single-stage axial turbine. Compared to Whittle designs, the H-1 was "cleaned up" in that it used a single-sided compressor with the inlet at the front, and a "straight through" layout with the flame cans exhausting straight onto the turbine. Whittle's designs used a "reverse flow" layout that piped the hot air back to the middle of the engine, in order to "fold" it and reduce its length. Halford's changes made his engine somewhat simpler than Whittle's designs, notably allowing one of the main bearings to be removed. Nevertheless it was a fairly compact design, even without the Whittle-style "folding".

The H-1 first ran on 13 April 1942, and quickly matured to produce its full design thrust within two months. It first flew on 5 March 1943 in the Gloster Meteor, and on 26 September in the de Havilland Vampire.[3] It was around this time that de Havilland purchased Halford's company and set him up as the chairman of the de Havilland Engine Company, with the engine name changing from H-1 to "Goblin", while the new H-2 design became the "Ghost".

In July 1943, one of the two H-1s then available (actually the spare engine intended as a backup for the one installed in the Vampire prototype) was sent to the United States, where it was selected to become the primary engine of the Lockheed P-80 Shooting Star. This engine was fitted to the prototype which first flew on 9 January, 1944. The engine was later accidentally destroyed in ground testing, and was replaced by the only remaining H-1 from the prototype Vampire.[3] Allis-Chalmers was selected to produce the engine in the US as the J36, but ran into lengthy delays. Instead, the Allison J33, developed by a General Electric as the I-40 (their greatly improved 4,000 lbf (18 kN) version of the J31, itself based on Whittle's W.1), was selected for the production P-80A. 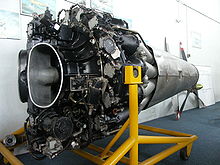 Goblin engines are preserved and on display at several museums including: