The series was originally published as a three-issue limited series (November 2001 - July 2002) by DC Comics, and since collected into hardcover and paperback one-volume editions, and Absolute Dark Knight edition (which also features The Dark Knight Returns). Like its predecessor, this story takes place in a timeline that is not considered canonical in the current continuity of DC Comics.[1]

After going underground, Batman (Bruce Wayne) and his young sidekick, Catgirl (Carrie Kelly, Robin from Batman: The Dark Knight Returns), train an army of "batboys" to save the world from a "police-state" dictatorship led by Lex Luthor. In a series of raids on government facilities, Batman's soldiers release from captivity other superheroes including: The Atom (trapped for years in a petri dish), Flash (forced to run on a treadmill to provide America with free power), and Plastic Man (now insane and trapped in Arkham Asylum). Elongated Man is recruited from his job as a commercial spokesman and Green Arrow is already working with Batman (as seen in the end of The Dark Knight Returns).

Other heroes such as Superman, Wonder Woman and Captain Marvel have been forced to work for the government since their loved ones are being held hostage and/or are under threat. Superman is even ordered by the "President" (in fact a computer generated front for Lex Luthor and Brainiac) to stop Batman. He confronts Wayne at the Batcave, but is defeated by Batman and the other superheroes.

Meanwhile, Batman's raids have not gone unnoticed by the media. After being banned for years, the freed superheroes have recaptured the public imagination becoming a fad among youth. At a concert for the pop group "The Superchix", Batman and the other heroes make a public appearance, urging their fans to rebel against the oppressive government.

During this time, rogue vigilante The Question spies on Luthor's plans, typing a journal to record the misdeeds of those in power. He attempts to convince the Martian Manhunter (now an aged, bitter, near-powerless figure with his mind filled with Luthor's nanotechnology) to stand up against Superman and the powers that be. The two are soon attacked by a figure who physically resembles the Joker but is seemingly invulnerable to injury, and the Martian Manhunter sacrifices his life as The Question is rescued by Green Arrow. The villain escapes, but proceeds to kill other heroes such as The Guardian, Creeper and likely others who have come out of retirement.

An alien monster lands in Metropolis and begins to destroy the city. Batman, however, is convinced that it is a way to lure him and his allies out of hiding and does not respond, callously dismissing Flash's claim that they are supposed to save lives. Batman's attitude is that the stakes are too high to worry about preserving life at all cost, whether this applies to men, women or even children.

Superman and Captain Marvel fight the monster, but it is revealed to be Brainiac, who coerces Superman (using the bottled Kryptonian city of Kandor as leverage) into losing the battle in order to crush the people's faith in superheroes. Captain Marvel is killed defending citizens from the carnage, but Superman is saved when Lara, his daughter by Wonder Woman, appears. She has been carefully hidden since birth, but, now that the government knows she exists, they demand that she be handed over.

Deciding that Batman and his methods are the only way, Superman, Wonder Woman and their daughter join him. By having Lara pretend to hand herself over to Brainiac, the Atom is able to slip into the bottle and free the Kandorians who use their combined heat vision to destroy Brainiac, the heroes subsequently destroying the power source of the dictatorship and inciting revolution. Batman allows himself to be captured and tortured by Luthor in order to learn his plan: Luthor has launched satellites to destroy most of the world's population and leave them with a more manageable number of people. The satellites are destroyed by the now god-like Green Lantern who wraps a giant fist around the Earth, destroying Luthor's several trillion dollars-worth of weapons. Luthor is subsequently killed by the son of Hawkman, whose parents had been killed earlier on. This is an action Batman planned and approves, much to Flash's horror.

Returning to the Batcave, Batman receives a communication from Carrie: she is being attacked by the same psychopath who dispatched the Martian Manhunter and other heroes. Batman recognizes the assailant as Dick Grayson, the first Robin, who has been genetically manipulated to possess a powerful healing factor and is criminally insane. Batman shows nothing but contempt for his former sidekick and plans his death the moment they face each other. Batman hurls himself and Grayson into a miles-deep crevasse filled with lava and blows up the entire cave, igniting an underground volcano and destroying everything. Robin falls in the lava, but Batman is saved by Superman at the last moment and brought to Carrie in the Batmobile. Both Bruce and Carrie survive. 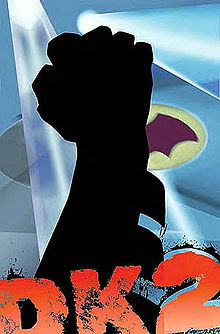 In Dark Knight Returns, Dick Grayson is noticeably absent, which Bruce Wayne explains by saying that they are not on speaking terms. He does reminisce about Dick when confronting the street gangs known as the Mutants in the tank-like Batmobile, and before meeting Carrie Kelly, who has taken up the Robin mantle on her own volition. When Grayson eventually confronts Batman in DKSA, it is revealed that Batman sacked him "For incompetence. For cowardice". He shows Grayson little in the way of sympathy, understanding or affection, and sets into motion the means of killing him there and then.

In Miller's Dark Knight Universe the connection between Wayne and Grayson is changed from the usual image of Batman and Robin as an idealized father-son relationship into an Oedipal nightmare.[3]

After completing The Dark Knight Strikes Again, Miller launched a series of what he referred to as prequels with All Star Batman and Robin the Boy Wonder.[1] In this series, Batman takes the young pre-teen acrobat in as a potential sidekick, but berates and abuses him, preventing the boy from coming to terms with the recent killings of his parents and keeping him a virtual prisoner in the Batcave.[4] He even withholds food from Dick and suggests that the boy eats the rats and bats that "present" themselves to him. He is also furious with Alfred for later showing a more humane treatment towards the boy.[5]

In Bob Kane and Bill Finger's original meeting of Batman and Dick in 1940, the Caped Crusader was much more friendly and sympathetic towards him, and only jokingly threatened to put him across his knee when Robin took a risk-too-many while dealing with those who had killed his parents.[6]

Comics historian Peter Sanderson states, "It is easy to see how Grayson might end up hating Batman after the way that he is treated in All-Star Batman and Robin #2."[1]