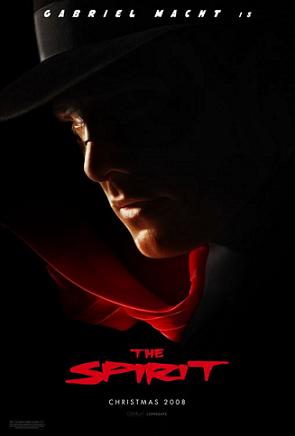 "The Spirit" (also known as "Will Eisner's The Spirit") is an upcoming 2008 American based on the strip of the same name created by . Batfilm, OddLot, and are set to produce. [cite news | url=http://www.comics2film.com/b/index.php?blog=17&title=lionsgate_conjures_the_spirit_with_odd_l&more=1&c=1&tb=1&pb=1 | title=Lionsgate conjures 'The Spirit' with Odd Lot Entertainment and visionary filmmaker and graphic novelist Frank Miller| publisher=Comics2Film |date=May 16, 2007 | first= | last= | accessdate=2008-09-18] Frank Miller wrote and directed the film, which stars as The Spirit and as his nemesis, The Octopus. Filming began in October 2007, with release scheduled for , .

Writer-director Frank Miller described the main character:The film series will not begin with an origin story, but will instead open with the adventures of The Spirit already having begun.

The protagonist will be involved in a love triangle with Sand Saref and Ellen Dolan, the daughter of Central City's Police Commissioner Dolan. The controversial character will not appear in the film.

In the early 1990s, producer obtained the rights to Will Eisner's 1940s "" for a . The producer promised Eisner that he would not permit anyone who "didn't get it" to work on the project. Two ideas pitched to Uslan were to put The Spirit in a costume and to have The Spirit really be a resurrected dead man that possessed superpowers.

In July 2004, financier acquired the rights to the film. OddLot's producers Gigi Pritzker and Deborah Del Pete began a collaboration with Uslan, working at Batfilm Productions, to adapt the story. Eisner, who was protective of the rights to his creations, said that he believed in the producers to faithfully adapt "The Spirit". [cite news | author=Michael Fleming | url=http://www.variety.com/article/VR1117908165.html?categoryid=1238&cs=1 | title=Odd Lot, Batfilm join forces for 'Spirit' | publisher=Variety | date= | accessdate=2007-02-13 ] In April 2005, was hired to adapt "The Spirit" for the big screen, [cite news | author=Ian Mohr | url=http://www.variety.com/article/VR1117920635.html?categoryid=1350&cs=1 | title=Loeb will get into 'The Spirit' | publisher=Variety | date= | accessdate=2007-02-13 ] but the writer eventually left the project. Later in April, Uslan approached Frank Miller at Will Eisner's memorial service in New York several weeks after Miller's "Sin City" was released in theaters, interested in initiating the adaptation technique with Miller's film for "The Spirit". Miller had initially hesitated, doubting his skill in adapting "The Spirit", but ultimately embraced his first solo project as writer-director.

In July 2006, Miller was officially confirmed to write and direct the film adaptation for "The Spirit". Miller announced that he was putting together a that included large parts of "The Spirit" strip panels. Miller described the project, "I intend to be extremely faithful to the heart and soul of the material, but it won't be nostalgic. It will be much scarier than people expect."

In February 2007, Miller completed the first draft of the screenplay, and began work on a second draft. Principal photography was initially slated to begin in late spring 2007. Miller also plans to begin filming "" in late spring, [cite news | author=Ian Spelling | url=http://www.scifi.com/scifiwire/index.php?category=0&id=40259 | title=Miller: "Sin 2" Is Ready To Go | publisher= | date= | accessdate=2007-02-26 ] but Uslan indicated that filming for "The Spirit" will begin before Miller starts "". Following the casting of as in August 2007, filming was re-slated for the following October.

At the on , , director/writer Frank Miller and producer was scheduled to present a panel for "The Spirit", [cite news | author= | url=http://www.comicbookresources.com/news/newsitem.cgi?id=9495 | title=NYCC ANNOUNCES MORE SPECIAL GUESTS; IMPORTANT DEADLINES | publisher= | date= | accessdate=2007-02-13 ] though Miller was unable to attend due to recuperation from hip and leg injuries. Instead, Uslan, fellow producer F.J. DeSanto, and former "The Spirit" publisher Denis Kitchen presented a panel at which they described the history of the film and the film's progress.

is producing a deluxe making-of book for the film, featuring interviews with the cast and crew, color photos, storyboards and production art, plus the full screenplay. It is scheduled to be released in December 2008, the same month as the film.

The film got a PG-13 rating from the MPAA for "intense sequences of stylized violence and action, some sexual content and brief nudity". [cite web | url=http://www.ropeofsilicon.com/article/latest_mpaa_ratings_119 | title=Latest MPAA Ratings: #119 | date= | accessdate=2008-08-29 ]