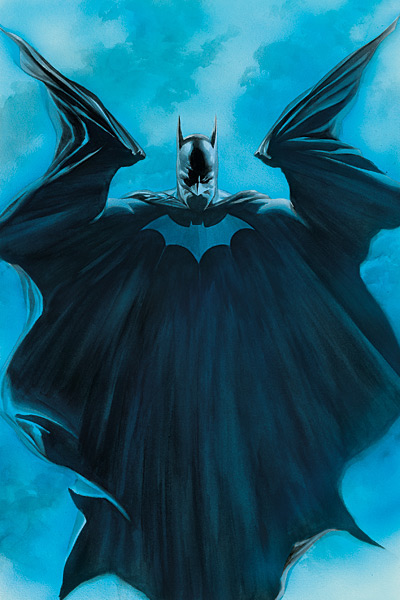 In an interview with , Grant Morrison explained that what's going to happen to Batman is "so much better than death. People have killed characters in the past but to me, that kind of ends the story! I like to keep the story twisting and turning. So what I am doing is a fate worse than death. Things that no one would expect to happen to these guys at all. This is the end of Bruce Wayne as Batman."

At the 2008 Comic Con "Spotlight on Grant Morrison" panel, Morrison talked about "Batman R.I.P." "When we begin to suspect the identity of the villain, I think it's the most, like I said the other day, it's possibly the most shocking Batman revelation in 70 years."

DC Universe #0 shed some light on the potential plot of the series, with a scene between Batman and the Joker written as a prelude to the upcoming storyline. In the sequence, Batman confronts the Joker about the mysterious "Black Glove," a villain who was behind the attempt to kill Batman during Morrison's "International " arc in Batman #667-669. The Joker, nonchalantly dealing out a "" from a deck of cards, gloatingly taunts Batman regarding his fear of the mystery villain and how the Black Glove intends on destroying him.

At an unknown location, a group of international supervillains gather at the behest of the Black Glove, represented by Dr. Simon Hurt, the man responsible for the isolation chamber experiment that nearly ended Batman's career and for the creation of the three replacement Batmen. They are planning a for Batman and arrange the delivery of an invitation to the villainous Joker. ["Batman" #672-674]

Back in Gotham City, Bruce Wayne and his new girlfriend receive an invitation to a "danse macabre" party being thrown by the Black Glove, which sends Bruce into a panic, out of fear that the Black Glove will hurt Jezebel in order get to Batman. Meanwhile Commissioner Gordon tries to stop a Gotham newspaper from running a story on a dossier allegedly compiled by a detective hired by the parents of (Batman's mother), contains many shocking allegations: testimony that was a drunk who addicted his wife to heroin, insinuations that is Bruce Wayne's true biological father, and photographs depicting an orgy involving Thomas and Martha Wayne, Alfred, and the stars of John Mayhew's noir film "The Black Glove". The editor also tells Gordon an even more unsettling theory: that Thomas Wayne may still be alive and that the "murder" of the Waynes was in truth an elaborate hoax, arranged by Thomas Wayne in order to kill his unfaithful wife and fake his own death.

The dossier itself may be part of a larger game being played by the Black Glove and the Club of Villains, which Doctor Simon Hurt is leading in their campaign against Batman. After one of Le Bossu's gargoyle henchmen drugs Batman with on the blade of a knife, Batman has the analyze all of his data on the Black Glove and Simon Hurt. The Batcomputer responds by displaying scenes from all over Gotham City in which the phrase "Zur-En-Arrh" has been spraypainted. The combination of the hypnotic drug and the trigger phrase "Zur-En-Arrh" causes Batman to collapse just as the Club of Villains descend upon the Batcave.

Doctor Hurt injects Batman with "weapons-grade" crystal meth and heroin and sets him loose to wander the streets of Gotham, confused and deranged. The other members of the "Club of Villains" target Batman's allies: while Robin escapes capture, Nightwing is caught and imprisoned in Arkham Asylum, which the villainous Le Bossu and his henchmen soon seize control over. Meanwhile, El Sombrero rigs Wayne Manor with his trademark death-traps, imprisoning Commissioner Gordon within the first floor of the mansion. Doctor Hurt then proclaims himself to be Batman's father, Thomas Wayne and proclaims that his vendetta against Batman is caused by the notion that Alfred is Bruce's biological father, revelations Alfred denounces as lies due to his longstanding relationship with the Waynes.

Bruce Wayne, having encountered a hallucination of a homeless man who died earlier that day, repeats the phrase "Zur-En-Arrh" and sews a new Batman costume out of scraps of cloth: the red, black, purple, and yellow costume of the "Batman of Zur-En-Arrh," who, with by his side, sets out into Gotham City to stop the Club of Villains. It's revealed, through Bat-Mite, that years earlier Bruce Wayne, as a defense against psychological attack, created a "backup" personality, a "Batman without Bruce," the Batman of Zur-En-Arrh (using a hallucination he suffered after exposure to 's gas as a basis), to take control in the event that Bruce might one day be mindwiped.

Upon hearing of Batman's "return", Dr. Hurt relocates to Arkham, bringing Jezebel Jet to the asylum and overseeing the release of the Joker, who has further disfigured himself by way of mutilating his tongue. Joker quickly disfigures Le Bossu (who is planning on lobotomizing Nightwing) and murders El Sombrero as a cadre of wealthy businessmen from across the world arrive to witness the Black Glove's endgame.

As Batman arrives at the asylum, Dr. Hurt invites the wealthy elite to gamble on and witness the death of Batman. Dr. Dax reveals himself to the Joker as Le Bossu, and begins to don his costume. Bat-Mite questions Batman's choice of Red and Yellow for his costume's colors, which Batman tells him suggest total confidence, as Robin wore the same colors for years and survived. After telling Batman that imagination and the 5th dimension are one in the same, Bat-Mite vanishes and Batman fights his way through Le Bossu's henchmen and the Joker, who has locked Jezebel Jet in a room with his poisonous black and red flowers. Commissioner Gordon makes it past El Sombrero's traps and discovers that Talia and Damian are at Wayne Manor to investigate Batman's whereabouts with Gordon.

Back at Arkham the Joker taunts Batman, saying Batman can never truly understand his insanity no matter how hard he tries. The Joker tells Batman that everything can't be broken down into clues and symbols. Jezebel is screaming for Bruce to save her, and Batman breaks the glass window of the room she is in, which is covered in red and black roses which according to Joker are apparently lethal when combined. As Batman reaches the flowers, Jezebel wearing a black dress sits up from her chair smiling, and slips on a pair of black gloves. As a now unmasked Batman begins to break down upon this revelation, the Joker asks Batman, "Now do you get it?", implying that Jezebel is the Black Glove.

The pins were also being given away at the Newsarama booth by DC's executive editor during HeroesCon 2008 in Charlotte, NC and again by DiDio at Emerald City Comic-Con in Seattle.

Also appearing in all comics across the DC universe is a checklist of the related issues alongside a picture featuring Batman's empty cowl hanging on a cross-shaped tombstone.

Each title has its own story, which relates to the other titles, especially the main one of "Batman", but the timelines of each do not coincide with the order in which they are published. For instance, the "Detective Comics" story occurs a few nights prior to the main one in "Batman". [ [http://ifanboy.com/podcasts/video/iFanboy_Mini_-_Episode__97_-__Paul_Dini_at_the_San_Diego_Comic_Con iFanboy Mini - Episode #97 - Paul Dini at the San Diego Comic Con] , Video, July 2008]

The Batman currently appearing in "" is indeed Bruce Wayne. Writer Grant Morrison stated, "First its "R.I.P.", and we'll see how that winds up for Batman. Then the two-parter I mentioned (#682-683) goes through Batman's whole career, in a big summing up of everything that also ties directly into "Final Crisis". And "Final Crisis" is where we see the final fate of Batman." [ [http://au.comics.ign.com/articles/902/902992p6.html IGN Interview with Grant Morrison] ]

Parallel to the main story in "Batman", but actually a prologue to it, Paul Dini's "Heart of Hush" deals with the return of Thomas Elliot to Gotham City and Batman's life, his connection to the Gotham Underworld, and how these things helped transform Elliot into Hush. Determined to get to Batman before the Black Glove does, he seeks revenge on Bruce Wayne's loved ones, and after targeting and , he manages to capture the latter and removes her heart from her body. He leaves her hooked to a cardiopulmonary machine, keeping Batman distracted with the help of the Scarecrow.

The story is ongoing.

tasks Nightwing to protect an old girlfriend of his, a witness in a high profile mob trial. While Nightwing manages to save her, escort her to court, and lock her safely in one of Batman's s, he's shot by bullets coated in the Scarecrow's fear toxin. So, he's unable to save Two-Face's girlfriend from her killer: Two-Face himself, in a characteristic show of his split-personality. While Nightwing still blames himself for the happening, Two-Face blames the entire Gotham City for being able to act unstopped, and plans vengeance on the whole city. In "Nightwing" #148, Two-Face asks Dick Grayson about his stay in , implying that "The Great Leap" takes place after "Batman R.I.P."

The story is ongoing.

Parallel to the main story, Batman is missing and rampaging through the city in a delusional state. Nightwing is imprisoned in Arkham Asylum and Robin, fearing that Batman could have lost his sanity and gone rogue, tasks himself with finding his mentor and stopping him if necessary. He enlists the assistance of the GCPD (without telling Commissioner Gordon fearing he would lack objectivity) and puts a bounty on Batman with the Penguin. Robin asks for Spoiler's assistance, but discovers that she has instead been undermining his efforts under the direct orders of Batman himself.

While his personal life starts to go downhill due to Spoiler's sudden return, the Penguin claims someone dressed as Robin stole back the bounty. Robin brings the matter to , suspecting him to be the culprit due to his short tenure as Red Robin. Jason denies this, instead telling Robin of his plan to take control of the city's gangs and use them as his personal police force to stave off the chaos following Batman's disappearance. He admits shock and surprise at the knowledge of a third individual that has started using the Red Robin guise after he discarded the relic from Earth-51.

With a reduced roster, a missing Batman, Batgirl taking command and Salah Miandad trapped into the ReMAC shell, the Outsiders are left to fend their enemies alone. After the events detailed in "Batman R.I.P." Batgirl embarks in an unsuccessful mission to find and retrieve Batman, witnessing how the past events tipped the scales in the Gotham microcosm, as the Penguin no longer controls Gotham Underworld, given to by Libra, Nightwing is still readjusting after the traumatic ordeal of his imprisonment, and crime runs in the streets. When Batgirl surrenders, a message from Batman arrives to the Outsiders' HQ, asking for his former teammates help.

This storyline also follows reactions to the events of R.I.P. from some of Batman's other allies, including , , Nightwing, and

At the end of Batman #680, it is mentioned that the sequel to the events of R.I.P. will be concluded in a series named Batman: Last Rites.

The "Batman R.I.P." events appear to have rippling effects in the whole DC Universe. In "Supergirl #34" it is mentioned how Batman's disappearance crippled Robin's organization, who is no longer able to provide full support and fake identities for Supergirl and his Titans.

The Batman R.I.P. aftermath was foreshadowed, along with many other events almost contemporary to the , like Jonathan Kent's death and 's engagement with Agent Tresser, in "Justice League #0", the lead-in to the current, revamped "Justice League of America" (2008) book, in which Superman and Wonder Woman are seen in Gotham mourning the disappearance, and possible death, of their friend, and how much they needed his help in a moment of crisis.

The story will be collected into multiple volumes: