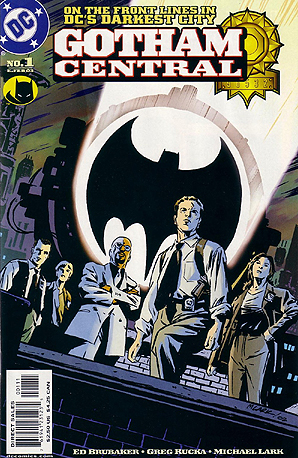 The Gotham City Police Department (GCPD) is a servicing in the .

Acting as both ally and opponent of , the superhero long-established in Gotham, the GCPD has long been steeped in corruption, with numerous officers both high-and-low ranking involved in bribery and even more serious offenses such as drug-trafficking and murder.

The strongest blow against came when an increasing amount of conspiracy charges against forced him to his position, replaced by Peter Grogan. The Falcone crime family, which had had a stranglehold on Gotham's underground for generations, finally crumbled when a series of killings shook the structure of the . After the death of , the mob lashed out in sloppy, retaliatory crimes, which, in combination with rising gang violence, severely crippled in Gotham City. Simultaneously, the ebbing presence of corrupt police officers allowed James Gordon to become the new commissioner, a man determined to eradicate crime wherever it existed.

The GCPD has had a long with the city's known as . Commissioner Gordon went along with him because Batman got the job done. His successor, Commissioner ordered the arrest of Batman and had the removed from the roof of . Corruption and rot within the police department also rose during Akins' tenure as Commissioner.

As of DC's "One Year Later", James Gordon has been reinstated as Commissioner, along with Harvey Bullock. Harvey came back on disciplinary probation after helping expose a criminal drug ring. Relation with Batman, including the Bat-Signal, have been established once more. Other characters from "" have appeared in the recent "Tales of the Unexpected" miniseries, featuring as the Spectre. Thus far, Detective Driver has appeared in a speaking role. It is unknown what has happened to Commissioner Akins, but it is implied that, following revelations of massive corruption within the department, there has been a drastic cleaning-of-house within the department.

referred to Akins as police commissioner in the weekly "52" series, which reveals the events of the missing year. A later issue, however, showed a brief snapshot of Commissioner Gordon's welcome back party. The circumstances of Akins's departure and Gordon's reinstatement have yet to be explained. is still the commander of the MCU department, and has ended her relationship with former lover Toby Raines.fact|date=February 2008

*Homicide Division :The division that handles s and some of the more serious non- crimes in Gotham. This is the division Gordon was a part of before becoming commissioner. Former private investigator Jason Bard is now working on homicide cases for this division.

*Major Crimes Unit:Led by Capt. , who previously served in Metropolis in a similar position with that city's police, the MCU deals with the most serious crimes, often involving or politically sensitive cases. This division is the focus of the series "".

"Note: The following are either deceased or have been dismissed from the Gotham City Police Department."

* - Succeeded Gordon as commissioner, left GCPD during the one year gap under unknown circumstances.

*Roger DeCarlo - Corrupt officer. Killed by Poison Ivy after accidentally murdering one of her orphans and attempting to cover it up.

* - Major Crimes Unit commander, wife of Commissioner Gordon. Killed by the Joker during "No Man's Land".

*Peter Grogan - Corrupt commissioner after Loeb and before Gordon, dismissed.

*Andrew "Andy" Kelly - Officer, partnered with Don Peak. Transformed into a monster by and killed in self-defense by Peak.

*Gillian B. Loeb - Corrupt commissioner in "Year One", dismissed and later murdered by the Hangman.

*Timothy Munroe - Corrupt officer. Killed by Poison Ivy after accidentally murdering one of her orphans and attempting to cover it up.

*Clancy O'Hara - Police Chief around the time Gordon had just initially became Commissioner. First victim of the Hangman at the start of "".

*Nate Patton - Detective, Major Crimes Unit. Partnered with Romy Chandler. Killed by the Joker.
*Billy Pettit - Head of SWAT team, went insane. Killed a fellow police officer for an imagined betrayal during "No Man's Land". Soon after was killed by the Joker.

*Commissioner Gillian B. Loeb — The corrupt commissioner of police during the first year of Batman’s operation in Gotham.

*Commissioner Jack Grogan - he was Commissioner after Loeb and before Gordon. He was mentioned in the last page of Miller's "Batman: Year One" and has a one panel appearance in the "Catwoman Year One Annual" and also in "Batman: The Man Who Laughs" and "Batman and the Monster Men" #1.

*Commissioner James Gordon — Replaced Loeb and worked with Batman in trying to clean up the Gotham police department. When he retired, he handed the GCPD over to Michael Akins, only to take the job back some years later. The adoptive father of Barbara Gordon, the original Batgirl and later Oracle.

*Commissioner Vane- Former Chief Inspector, only served as commissioner briefly when Gordon was demoted to patrolman in "Detective Comics" #121. During his brief tenure, he oversaw Dr. Hurt's experiments.

*Commissioner Peter Pauling — Another corrupt commissioner, appointed by Mayor Hamilton Hill. Like Hill, he was working for Rupert Thorne. Pauling issued a shoot-to-kill order for any police officer who spotted Batman, and secretly tried to have Gordon, who was working as a private detective, killed. Pauling eventually died at Thorne's hands and a desperate Mayor Hill re-instated Commissioner Gordon. Pauling may not have existed in the Post-Crisis DC universe.

*Commissioner Sarah Essen Gordon — The wife of James Gordon, appointed Commissioner by Mayor Krol while her husband was demoted. This put a great strain on her relationship with her husband and they split up for a while. Although she had previously been a critic of the Batman, she agreed to Mayor Krol's instructions that she use him. Mayor Krol sacked her after he lost his re-election bid against Marion Grange, replacing her with Andy Howe.

*Commissioner Andy Howe — A lawyer who served briefly as Commissioner during the lame-duck Mayoralty of Armand Krol. ("Detective Comics" #693, January 1996) When the "Clench" virus was released in Gotham and the city descended into anarchy, most police officers ignored Howe and took orders from James Gordon, at that point a private citizen. Howe lost his job when Marion Grange became Mayor and immediately re-instated James Gordon. ("Robin" #28, April 1996)

*Commissioner Michael Akins — Took over from James Gordon. He left the position under unspecified circumstance.

All other depictions of Batman have portrayed the Gotham City Police Department in some form or another. The 1940s has actor in the role of Commissioner Gordon in each one. No other members of the force are shown. However, his appearance of Gordon having a feather-duster mustache was later adapted to the comics. Interestingly enough, he portrayed in the serial "Superman".

The 1960s Batman featured as Gordon and as Chief O'Hara. Both are depicted as being dependent on Batman and Robin to solve the cases, whereas the clues are easy to discover and interpret. Gordon even keeps a link to the Batcave called "the Batphone" on his desk. In one episode, when Batman appears to be missing, Gordon laments that the police will have to solve a case "ourselves."

All the / series seemed to give little depiction on the GCPD at all. In "Batman", Gordon is portrayed by , while the usually corrupt Harvey Bullock is replaced with ' Lt. Max Eckhart, who is killed by Jack Napier prior to his accidental transformation. Hingle also appeared in "", "", and "Batman & Robin".

In the acclaimed , "", the GCPD characters are given more attention such as in "P.O.V", where the major characters of the force in the series participate in a detailed debriefing of an incident. One of the most important contributions from the animated series to the Batman universe is the introduction of (first as a uniformed constable, then a detective), which would later become a first-grade character in the "GCPD" comic books. In the printed , her presence was so solidly incorporated that she later retired from the Department to assume the identity of the Question.

Batman Begins and The Dark Knight

The of the "Batman" film franchise, "", has the GCPD play a pivotal role during the course of the film. While Jim Gordon (played by ) is the major officer, others from the comics play a role as well. plays Detective Flass as dealing with the local mafia, and appears as the staunchly vigilante-opposed Commissioner Loeb. Although Flass is shown to be corrupt, Loeb does not seem to be, but he is clearly displeased with the arrival of Batman. This is demonstrated by him calling a SWAT team to capture him; a scene which is lifted from the "Year One" comic.

The film's sequel, "The Dark Knight", features the GCPD extensively. According to the viral marketing campaign for the film, Harvey Dent spearheads an initiative through his office to rid the department of corruption. Commissioner Loeb is murdered when his drink is replaced with acid by the Joker as part of a three-way attack that also included bombing a judge's car and attacking a fundraiser for Harvey Dent. After the Joker is captured the first time, Gordon is appointed to replace Loeb as Commissioner by the Mayor. Also featured are three detectives, Stephens (played by ), Wuertz (played by ) and Anna Ramirez (played by ). While Stephens is a good and honest cop, the latter two are corrupt and involved in the mob. They help the Joker kidnap and . Dent and Dawes are tied up and placed near explosives. Batman rescues Dent but Dent's face is scarred while Dawes is killed. While Wuertz appears to show no remorse whatsoever for his crime, Ramirez is clearly devastated by the turn of events. Dent later kills Wuertz after the coin lands on the charred side (and partially for revenge), but he spares Ramirez after the coin lands on it's good side (and partially because she needed money for her ill mother's hospital bills). He merely punches her in retribution.

Harvey Dent, prior to becoming the district attorney, worked closely with Internal Affairs when starting out in his law career and was nicknamed "Harvey Two-Face", a name he takes up after his scarring.

Out of all six "Batman" films, the Christopher Nolan series prominently featured the GCPD with a team mostly because of the series' realistic tone.

Gordon, Ramirez, and Crispus Allen all appear in three of the shorts in ', which bridges the gap between "Batman Begins" and "The Dark Knight"; ', "", and "".

While Gordon resembles how he was portrayed in ' and ', both Flass and Loeb resemble, respectively, Harvey Bullock and Michael Akins rather than their comic book counterparts. It's been speculated and comments made on the commentary track of "Batman: Gotham Knight" seem to hint that Ramirez is loosely inspired by Renee Montoya.

On the animated series "The Batman", the focus of the GCPD in the first two seasons is on Detectives and (prior to his transformation) . The corruption on the force is attributed to Chief , who appeared often in those seasons. However, in the Season 2 finale, Jim Gordon, recently appointed Commissioner, calls off the manhunt and forms an alliance with Batman to help keep Gotham safe for his daughter, Barbara. Neither Rojas or Yin has been seen since then, though one episode that take places in the future implies that sometime between now and then, Yin will replace Gordon as Commissioner.

Alternate officers of the law