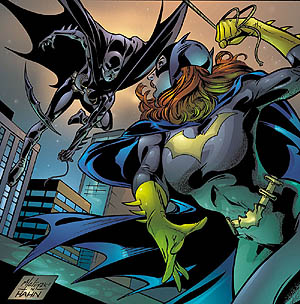 Batgirl is the name of several appearing in s published by , depicted as female counterparts to the . Originally created by and , the first incarnation of the character, the "Bat-Girl" , debuted in "Batman" #139 (1961). Following the promotion of to editor of the Batman-related comic book titles in 1964, the Bat-Girl character was removed from publication and subsequently replaced by the "new" Batgirl . The new character was introduced in and 's "" #359, entitled "The Million Dollar Debut of Batgirl" (cover-date 1967, released late 1966).

The iconic Barbara Gordon version of Batgirl made regular appearances in Batman-related comics from 1966 to 1988 and is described as one of the most high profile characters to be published during the . Following the editorial retirement of the character in "Batgirl Special" #1 (1988), Barbara Gordon is paralyzed by The Joker in the "" (1988). Editor and comic book author later reinvented Barbara Gordon as Oracle, the premiere of the and leader of the "Birds of Prey" organization. Beginning in 1997, DC Comics began publishing "flashback" stories featuring Barbara Gordon as Batgirl, and those stories still appear (as of September 2008).

In the 1999 story "", Helena Bertinelli briefly assumes the role of Batgirl, until she is stripped of the identity by Batman towards the conclusion of the story for violating his stringent codes. Within the same year, a new character introduced during the "No Man's Land" series, named , created by and , becomes the third Batgirl under the tutelage of Batman and Oracle. Cassandra Cain was the first version of the Batgirl character to star in an ous monthly series, which was canceled in 2006, ending with Cain relinquishing her title as Batgirl. During the "Headhunt" arc of the "Birds of Prey" comic book series, the Charlotte Gage-Radcliffe character created by temporarily took the name of Batgirl, but was eventually forced to abandon the role by Oracle and subsequently adopted the alias "Misfit." Following the events of the limited series "52" (2006), the Cassandra Cain character has reclaimed her former identity as Batgirl.

Following the accusations of homosexuality between Batman and Robin as described in 's book "" (1954), a female character, Kathy Kane the , was introduced in 1956 as a love interest for Batman.

These characters were abandoned in 1964 when newly appointed Batman editor Julius Schwartz concluded they were inappropriate.

A new Batgirl—Barbara "Babs" Gordon, the daughter of Batman's supporting character Police commissioner James Gordon—debuted in "Detective Comics" #359 (cover-dated January 1967, but released in November 1966). [cite book |last= Fox |first= Gardner |authorlink= Gardner Fox |title= "Detective Comics" #359|year= 1967 |publisher= DC Comics] In her debut, Gordon is on her way to a masquerade ball dressed as a female version of Batman when she disrupts a kidnapping attempt on Bruce Wayne by the villainous . This attracts the attention of Batman and leads to her establishing a crime-fighting career. This new character, jointly created by Editor Julius Schwartz, artist Carmine Infantino and author Gardner Fox, was a collaboration between DC Comics and the "Batman" television series of the late 1960s which aired on ABC. When television producer sought to renew the Batman program for a third season, he asked Schwartz for a new female character to be introduced in the comic book medium, which could be adapted into the television series in order to attract a female audience.

As Batgirl, Barbara Gordon proved to be more popular than the previous Bat-Girl and Batwoman characters. Barbara Gordon appeared as Batgirl in both "Batman" and "Detective Comics", and other DC Comics publications unrelated to Batman. The character also received a starring role in the "Batman Family" comic book series which debuted in 1975, where she becomes part of the "Dynamic Duo: Batgirl & Robin" with Dick Grayson. [cite book |last= Maggin |first= Elliot |title= "Batman Family" #1 |year= 1975 |publisher= DC Comics] Described as one of the most popular characters to appear in publications during the Silver Age of Comic Books,

Depicted as a , Cassandra Cain is written as a young woman of partly Asian descent who becomes the third in-continuity Batgirl, with the approval of both Batman and Oracle, following her introduction in "Batman" #567 (1999) as part of the "Batman: No Man's Land" crossover. [cite book | last = Conroy | first = Mike | title = 500 Great Comicbook Action Heroes | publisher = Chrysalis | year = 2002 | isbn = 1844110044] Cassandra Cain wears the same Batgirl costume worn by Helena Bertinelli. Raised by assassin , Cassandra Cain was not taught spoken language, but instead was taught to "read" physical movement. Subsequently, Cain's only form of communication was body language.

When DC Comics continuity skips forward one year after the events of the limited series "", Cassandra Cain is revived as leader of the , having abandoned her previous characterization as an . The character's progression from heroine to villain angered some of her fans and was accompanied by heavy criticism. [cite web | last = Taylor | first = Robert | title = Reflections: Talking "Robin" (And Batgirl) With Adam Beechen | publisher = "" | date = 2006-11-05 | url = http://www.comicbookresources.com/news/newsitem.cgi?id=8802 | accessdate = 2008-02-19] Cain reprised her role as Batgirl in the "" (2007) storyline of "Teen Titans", [cite book |last= Johns |first= Geoff |authorlink= Geoff Johns |title= "Teen Titans" #43 |year= 2007 |publisher= DC Comics] where it was discovered that she had been influenced by a mind-altering drug administered by Deathstroke the Terminator. Following the conclusion of the storyline, DC Comics has restored Cain's original characterization as a superheroine and the character has been given a supporting role in the comic book series "".

Betty Kane's Bat-Girl was primarily interested in vigilantism in order to develop a relationship with the original Robin, Dick Grayson, as her introduction into publication was a deliberate attempt to avoid further allegations of homosexuality that "Seduction of the Innocent" presented to the public. Depicted as the niece of Batwoman, Bat-Girl had developed a crush on Robin after arriving in Gotham City and decided to fashion her own superhero persona based on Robin's costume. Her appearance in comic books primarily displayed her character attempting to develop a romantic relationship with Robin, despite his embarrassment or lack of interest.

When Julius Swartz asked Carmine Infantino for a redesign of the Bat-Girl character, Infantino recalled Betty Kane's character as a "pesky girl version of Robin", and decided to come up with something more original. [cite web | last = Fitzgerald | first = Michael | authorlink = Michael Fitzgerald | title = Carmine Infantino: Decades at DC and Beyond | year = 2007 | url = http://www.wizarduniverse.com/magazine/wizard/004812442.cfm | accessdate = 2007-11-23] Gardner Fox and Carmine Infantino's new "Batgirl" was written as an adult and as a career woman working as head of Gotham City Public Library. Though the Barbara Gordon character saw Batman as her inspiration and idol, fashioning her crime-fighting persona after him, her primary concern was solving cases and often worked independently from Batman and Robin. Batgirl was primarily featured in "Detective" comics in stories separate from the Dynamic Duo.

Adaptations in other media

A pop culture icon, the Barbara Gordon version of Batgirl has been adapted into all media relating to the Batman franchise including , , and . The Barbara Gordon Batgirl, jointly inspired by producer William Dozier and DC Comics editor Julius Schwartz, appeared in the final season of the live-action "Batman" television series in 1967, promptly following the character's comic book debut. [cite web | last = Sherman | first = Stanford | title = Enter Batgirl, Exit Penguin | work = Batman | publisher = www.tv.com | date = 1967-09-14 | url = http://www.tv.com/batman-1966/enter-batgirl-exit-penguin/episode/6903/summary.html | accessdate = 2008-01-02] Actress was featured in a promotional short, which was shown to ABC executives in order to not only add Batgirl to the cast, but ensure a third season for the television series.

In addition to animated adaptations, the Barbara Gordon version of Batgirl served as the inspiration for the character Barbara Wilson in the 1997 feature film "Batman & Robin". Departing from the comic book character's history, the alternate version of Barbara is portrayed by as the niece of , Bruce Wayne's butler and Batman's loyal assistant.

The depiction of the Barbara Gordon incarnation of Batgirl as a career-oriented woman, coupled with her alter-ego as a crimefighter, is considered to be symbolic of the women's empowerment movement of the 1960s according to critic and historian . [cite web | last = Sanderson | first = Peter | authorlink = Peter Sanderson | title = Comics in Context #67: Catch As Cats Can | year = 2007 | url = http://comics.ign.com/articles/595/595646p7.html | publisher= | accessdate = 2008-06-09] Gordon's career as a librarian also represented a "valued and honored profession" within mainstream American comics, despite the fact that comic books were not considered to be a respectable pastime by library professionals.

...likely explanations for why Batgirl's alter ego was a librarian are (a) librarianship was at the time an established and acceptable occupation for a(n) (unmarried) young woman, and (b) Barbara Gordon's job as a seemingly meek and passive librarian had to be considered an ideal contrast to her truly significant (and exciting) work as Batgirl.

Actress , who was cast as Batgirl during the final season of the "Batman" television series, also portrayed the character in the 1972 for the advocating equal pay.