The limited series has a single story to tell. It follows the standard plot set-up of beginning, middle, and resolution. Usually, all plot points are covered by the end of the series. There have been limited series done in an anthology format, but only a few of these have been produced.

Limited series are often done by a single creative team, but in cases where there are changes, it is usually the writer who remains constant throughout the run while the artist(s) may change. The number of issues is usually determined by some combination of the writer’s plotting and editorial mandate.

The genesis of the limited series may be traced to anthology series and back-up stories in series featuring the title character. Publishers would often experiment with new characters and stories. If proven popular, these characters were quickly spun off to their own titles. This was a particularly common strategy of comics in the 1960s and 1970s, which saw a comics sales boom (many times, new titles were launched despite uncertainty about whether a character or team could carry a new series for more than a few issues).

Nowhere was this seen more than with DC Comics, which released many titles between 1975 and 1978, reaching close to 60 monthly ongoing titles. Eventually, DC was forced to scale back and cancel more than half of its titles (see the so-called DC Implosion). Aside from suffering financially, DC Comics was also criticized for straining itself creatively and editorially, affecting the quality of their comics.[citation needed] 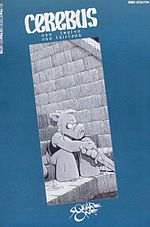 During 1979, 23-year-old Dave Sim had been a frequent user of marijuana, and soon began experimenting with LSD, taking the drug with such frequency that he was eventually hospitalized. Sim claims that it was this incident that led to the inspiration of creating to produce a comic book series called Cerebus the Aardvark, fixing the amount of issues to 300.

Sim did not realize at the time that by fixing the limit of issues, he had created a new format.[citation needed] As well as being the first limited series, it is also the longest limited series of all time, spanning 300 issues released from December, 1977 to March, 2004. 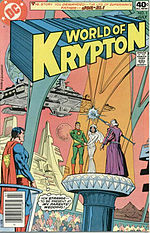 In 1979, in the process of recovering from the DC Implosion, DC Comics decided to experiment with a new format to tell stories. The result was the 1979 World of Krypton miniseries,[1] as DC termed such short-run works. The new format allowed the company to tell stories that may not have fit into an ongoing series and to showcase characters into a short story without the risk and obligations of an ongoing monthly. It also freed creators to tell a longer story without the confines characteristic of a backup story.

With the success of the miniseries format, DC Comics followed by experimenting with longer stories and concepts that were outside of their universe of superheroes. Debuting in 1982, Camelot 3000 was the first limited series to run to twelve issues and be dubbed as a "maxiseries."[2] Camelot 3000 was printed on Baxter paper stock and sold through direct market stores. DC followed Camelot 3000 in 1983 with another important contribution to the concept, Ronin, also printed on Baxter paper stock, with more pages than the conventional magazine pamphlet and featuring no advertisements.[3] Without the advertisements, it resulted in a different pacing in comics storytelling.

Marvel: Wolverine and Contest of Champions 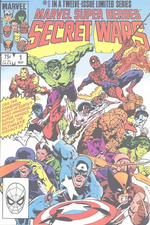 It did not take long for other publishers to follow the limited series form. Marvel Comics used it to feature popular characters from team titles and put them in a lengthy solo adventure. Wolverine's earliest solo adventures were told in limited series. Crossovers between two characters or teams presented as major storylines were also in limited series form before the concept of crossover stories jumping from one title to another was conceived. Contest of Champions brought forth the idea of a major event affecting the Marvel Universe. This would be taken further with the twelve-issue Secret Wars saga in 1984 and by DC’s Crisis on Infinite Earths in 1985.

In 1986, DC released The Dark Knight Returns, the first mainstream comic printed on glossy paper stock utilizing the "prestige" (or "bookshelf") format, which was square-bound with a card-stock cover. The Prestige format is not favored by other publishers[citation needed] and DC Comics is the only publisher that continues to use it.

The majority of Dark Horse’s comics are released in limited series form. Their contribution would be the idea of a series of limited series. Each limited series told a complete story to be followed by another one that built its story from the previous limited series. This provided an avenue for creator-owned works where the uncertainty of investing the creator’s property in an ongoing series was lifted from the creator’s concern. The owning creator could complete a limited series installment and follow it with another when they could. This was a model other publishers would use.

Since then, the limited series made it possible for creators to tell graphic novel-length stories. Releasing the story in monthly installments enabled them to immediately receive returns on investment. Further returns are possible with trade paperback collections of the series.

Four-to-six issues is still the norm for most limited series, and presents the most reasonable investment for comic publishers, though there are series that run for as short as two or three issues. The twelve-issue maxiseries form was popular in the 1980s. Many memorable series ran this length, such as Secret Wars, Crisis on Infinite Earths, Watchmen, Amethyst, Princess of Gem World and Squadron Supreme. This form almost faded out in the 1990s. One point that went against it was the greater financial risk in investing in a lengthy limited series. The popularity of the maxiseries length was resurrected by DC with the success of Batman: The Long Halloween and The Kents.

Stories of greater length, those running to more than twelve chapters, were often done in multi-title crossovers, though the 1995 Marvel Comics event, Age of Apocalypse, involved several limited series that replaced the ongoing X-Men-related titles for four months and book-ended by two one-shot specials. This idea was revisited by Grant Morrison in 2005 with the Seven Soldiers of Victory project, and which he dubbed as a mega-series.[4] Marking the difference between the two, Age of Apocalypse was produced by several writers while the ambitious Seven Soldiers was the work of a single writer.

The DC project, 52, which ran from May 2006 to May 2007, became the largest limited series aside from Cerebus, composed of 52 weekly issues. DC did not label it as either a maxiseries or a miniseries, calling it simply a series (which is misleading since the project was always intended to end by the fifty-second issue). On 9 May 2007, DC immediately followed this series with another, similarly to be published weekly for 52 weeks, entitled DC Countdown. When DC Countdown was completed, DC launched another series in the same weekly year-long format, Trinity.

As a rule, the number of issues a limited series will run is determined from the outset. However, there have been cases where this rule was changed. There are usually only two reasons for this, one being commercial, the other being, to a rarer extent, creative. Dark Horse’s 1993 Aliens: Colonial Marines was originally supposed to run twelve issues. When the sales of Colonial Marines faltered midway through the run, the series was shortened to ten issues.[citation needed] Marvel’s Fantastic Four: Big Town was set to run six issues only to be set back to four issues. Number changing does not always result in reduction of issues. The first Gen¹³ was to run four issues, with the fourth a double-sized finale. Instead, the final issue was split to two in order to meet publishing schedules. Brian Michael Bendis found difficulty in resolving the finale of Ultimate Six and Marvel granted his request of extending the series from six to seven issues.[citation needed] The same thing happened with Marvel's Eternals Vol. 3, which went from six to seven issues when writer Neil Gaiman asked for an extra issue to resolve the ending. Most recently, the eight-issue X-Men First Class, as well as the six-issue Avengers: The Initiative, were both amended to become ongoing series instead, although with X-Men First Class the new books are officially considered as a second volume.

Occasionally, an ongoing series will be turned into a limited series. Marvel's The Ultimates began as a monthly series, but became a limited series when production issues arose.[citation needed] When Ultimates 2 was released, it too was released as a limited series. When Marvel's New Universe line of comics was cancelled completely, the final issues of the remaining three titles (Psi-Force, D.P. 7 and Justice (New Universe)) were labeled "#32 of a Thirty-two-Issue Limited Series", in the same style that Marvel used to mark limited series at the time. This was humorously repeated as Marvel, when ending its Transformers comic book in 1992 with issue #80, put a caption on the cover of the book claiming that it was "#80 in a four issue limited series".[citation needed]