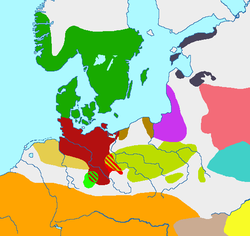 The Oksywie Culture, was an archaeological culture which existed in the area of modern day Eastern Pomerania around the lower Vistula river, from the 2nd century BC to the early 1st century AD.

The Oxhöft culture is associated with the Rugii and Lemovii, both East Germanic tribes.[1][2] The replacement of the Oksywie culture by the Wielbark culture in the areas surrounding the mouth of the Vistula is associated with Jordanes' account of the migration of the Goths from Scandza (Scandinavia), when Berig and his party defeated the East Germanic tribes of the Rugians and Lemovians, and settled on their land.

The Oksywie culture is named after the village Oksywie, now part of the city of Gdynia in northern Poland, where the first archaeological finds typical of this culture were discovered.

Archaeological research of last decades near Pomerania in Poland suggests the transition of Oksywie culture into Wielbark culture. Its timing coincides with the appearance of new population of Scandinavians in a previously uninhabited area ("no man's land") between the Oksywie and Przeworsk culture areas. It appears likely that the new population which appeared on southern coast of the Baltic in the early 1st century AD catalyzed the transformation of Oksywie culture into Wielbark culture and can be identified with the Berig party described by Jordanes. The area where they settled suggests that those northmen of Berig could have been invited to settle as a buffer bulwark to defend the tribes known as Oksywie culture against their southern (probably Vandal) neighbors.[1][2]