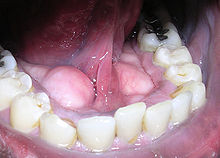 Inadequate removal of plaque caused a build up of calculus (dark yellow color) near the gums on almost all the teeth.

Dental plaque is a biofilm, usually a pale yellow, that develops naturally on the teeth. Like any biofilm, dental plaque is formed by colonizing bacteria trying to attach themselves to a smooth surface (of a tooth)[1]. It has been also speculated that plaque forms part of the defense systems of the host by helping to prevent colonization by microorganisms which may be pathogenic[2].

The oral cavity contains the only known anatomical aspect of the human body that does not have a regulated system of shedding surfaces: the teeth. This allows a numerous amount of microorganisms to adhere to the surface of teeth for long periods of time[3]. These multiple species of bacteria become dental biofilm. Dental biofilm, more commonly referred to as dental plaque, is composed of about a thousand bacteria that take part in the complex ecosystems of the mouth. The natural, non-frequent regulation of tooth shedding plays a large role in making dental biofilm the most diverse biofilm in the human body despite the relatively small size of the teeth.

The human oral cavity is also called the human oral microbiome. This is because the human oral cavity can contain several environments at a given moment that could vary from tooth to tooth [4] . Additionally it has been estimated that the number of bacteria that reside in the mouth is about 25,000 species of bacteria [5]. This is in contrast to the previously estimated 700+ species [6]. Studies have found that out of the 25,000 species that exist in the oral cavity, about 1000 species can exist as part of the dental biofilm ecosystem [7]. This is also in contrast to the previous estimated 500+ species as part of the dental biofilm [8]. These 1,000 species have the ability to change their environment through a series of biotic relationships.

At first, the biofilm is soft enough to come off by using finger nail. However, it starts to harden within 48 hours, and in about 10 days the plaque becomes dental calculus (tartar) rock-hard and difficult to remove.[citation needed]

Dental plaque can give rise to dental caries (tooth decay)—the localised destruction of the tissues of the tooth by acid produced from the bacterial degradation of fermentable sugars[2]—and periodontal problems such as gingivitis and chronic periodontitis. 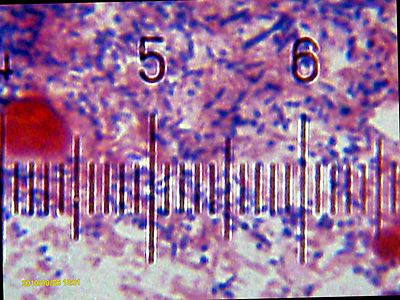 Microscopic view of some of the bacteria of which plaque is composed. Numbered ticks are 10 µm apart.

The mechanisms of plaque formation include[2]

As previously mentioned there are about 1,000 out of the 25,000 species of bacteria that are involved with the formation of dental biofilm. Due to this fairly large number there is fierce competition among the bacteria present on dental biofilm for nutrients present in the mouth. Only about fifty percent of the 1,000 species have been cultured for study [9] Scientists have begun the Human Oral Microbiome Project to identify bacteria and study the complex ecosystems of the mouth. On their website, one can find information about the identified organisms as well as the method being utilized to identify the organisms.

The ecological factors provided by the environment of the oral cavity are directly proportional to the species richness and species biodiversity of the microorganisms that reside on the teeth [10]. The main ecological factors are pH, saliva, temperature and redox reactions [11] [12]. The majority of microbial organisms prefer neutral pH levels (pH 7). Saliva acts as a buffer, maintaining the pH in the mouth between 6.75 and 7.25. [13]. In addition to acting as a buffer, saliva is also a main source of nutrients for the thousands of bacteria (note: gingival crevicular fluid is also a nutrient source but a smaller one ). A two degree (ºC) change has been shown to drastically shift the dominant species in the plaque. [14]. The normal temperature of the mouth ranges from 35ºC to 36ºC (Marsh). Redox reactions are carried out by aerobic bacteria. This keeps the oxygen levels in the mouth at a semi-stable homeostatic condition. This allows other bacteria to survive, which will be discussed in the next section. [15]

The microorganisms in the oral cavity live with one another in commensal or mutualistic symbiotic relationships.[16] Typically, anaerobic bacteria would succumb to high levels of oxygen, but with the redox reactions discussed in the previous section they are able to survive. This commensal relationship allows a mixture of aerobic and anaerobic bacteria to live in the same area. The formation begins by the adsorption of early colonizers onto an acquired pellicle through chemical processes [17]. An acquired pellicle is a layer of saliva that is composed of mainly glycoproteins and forms shortly after cleaning of the teeth or exposure of new teeth. [18]. These bound early colonizers manipulate the environment for the immediate benefit of other bacteria. Once the environment has been manipulated other bacterial colonizers are able to co-adhere to the early colonizers. This is done repeatedly resulting in layers of bacteria. Once new bacterial cells co-adhere to one another they gain the ability to communicate to one another. They are able to communicate to one another through a biochemical process called quorum –sensing [19]. Quorum –sensing virtually allows all the bacteria to benefit from one another. This ability can allow a bacterium to feel the presence of other bacteria around it. Due to this communication, bacteria have the ability to change their genotype (and thus their phenotype) as a result of population concentration and/or environmental changes to remain as competent competitors [20]. These relationships tend to exhibit homeostasis until there is some type of disruption in the ecosystem.

The most common reasons for ecosystem disruption are the ecological factors that were discussed in the environment section. The bacteria that exhibits the most fit plasticity for the change in environment dominates the given environment. Often, this could lead to opportunistic pathogens that lead to dental caries and periodontal disease. Pathogens that have the potential to cause dental caries flourish in acidic environments.Pathogenic bacteria that have the potential to cause periodontal disease flourish in a slightly alkaline environments[21].

The microorganisms that form the biofilm are mainly Streptococcus mutans and anaerobes, with the composition varying by location in the mouth. Examples of such anaerobes include fusobacterium and actinobacteria.

The microorganisms present in dental plaque are all naturally present in the oral cavity, and are normally harmless. However, failure to remove plaque by regular tooth brushing means that they are allowed to build up in a thick layer. Those microorganisms nearest the tooth surface convert to anaerobic respiration; it is in this state that they start to produce acids.