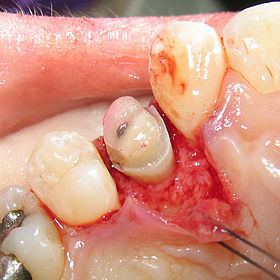 A palatal view of a maxillary premolar during a crown lengthening procedure.

Crown lengthening is a surgical procedure performed by a dentist to expose a greater amount of tooth structure for the purpose of subsequently restoring the tooth prosthetically.[1] This is done by incising the gingival tissue around a tooth and, after temporarily displacing the soft tissue, predictably removing a given height of alveolar bone from the circumference of the tooth or teeth being operated on. While many general dentists perform this procedure, they frequently refer such cases to periodontists.

The gingival sulcus (G) is a little crevice that lies between the enamel of the tooth crown (A) and the sulcular epithelium. At the base of this crevice lies the junctional epithelium, which adheres via hemidesmosomes to the surface of the tooth, and from the base of the crevice to the height of the alveolar bone (C) is approximately 2 mm, known as the biologic width.

The biologic width is patient specific and may vary anywhere from 0.75-4.3 mm.

Biologic width is the distance established by "the junctional epithelium and connective tissue attachment to the root surface" of a tooth.[1] This distance is important to consider when fabricating dental restorations, because they must respect the natural architecture of the gingival attachment if harmful consequences are to be avoided.

Based on the 1961 paper by Gargulio, the mean biologic width was determined to be 2.04 mm, of which 1.07 mm is occupied by the connective tissue attachment and another approximate 0.97 mm is occupied by the junctional epithelium.[1][2] Because it is impossible to perfectly restore a tooth to the precise coronal edge of the junctional epithelium, it is often recommended to remove enough bone to have 3mm between the restorative margin and the crest of alveolar bone.[3][4][5] When restorations do not take these considerations into account and violate biologic width, three things tend to occur:

In addition to crown lengthening to establish a proper biologic width, a 2 mm height of tooth structure should be available to allow for a ferrule effect.[6] A ferrule, in respect to teeth, is a band that encircles the external dimension of residual tooth structure, not unlike the metal bands that exist around a barrel. Sufficient vertical height of tooth structure that will be grasped by the future crown is necessary to allow for a ferrule effect of the future prosthetic crown; it has been shown to significantly reduce the incidence of fracture in the endodontically treated tooth.[7] Because beveled tooth structure is not parallel to the vertical axis of the tooth, it does not properly contribute to ferrule height; thus, a desire to bevel the crown margin by 1 mm would require an additional 1 mm of bone removal in the crown lengthening procedure.[8] Frequently, however, restorations are performed without such a bevel. 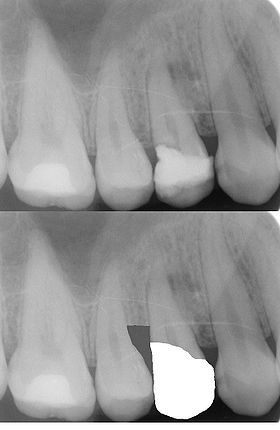 These two X-ray films depict the teeth of the upper right quadrant. In the upper film, there is a tooth, #5, with a large, defective DO composite restoration. The lower film depicts the ideal bone level after a crown lengthening procedure has been completed, as well as the margin of the prosthetic crown in relation to the reduced height of bone. Note that this is a dramatization of the procedure: the lower film is a digital manipulation of the upper film, and not an actual film of the teeth after a crown lengthening procedure and crown cementation have been performed.

Some recent studies suggest that, while ferrule is certainly desirable, it should not be provided at the expense of the remaining tooth/root structure.[9] On the other hand, it has also been shown that the "difference between an effective, long-term restoration and a failure can be as small as 1 mm of additional tooth structure that, when encased by a ferrule, provides great protection. When such a long-lasting, functional restoration cannot be predictably created, tooth extraction should be considered."[10]

The alveolar bone surrounding one tooth will naturally surround an adjacent tooth, and removing bone for a crown lengthening procedure will effectively damage the bony support of adjacent teeth to some inevitable extent, as well as unfavorably increase the crown-to-root ratio. Additionally, once bone is removed, it is almost impossible to regain it to previous levels, and in case a patient would like to have an implant placed in the future, there might not be enough bone in the region once a crown lengthening procedure has been completed. Thus, it would be prudent for patients to thoroughly discuss all of their treatment planning options with their dentist before undergoing an irreversible procedure such as crown lengthening.

Crown lengthening is often done in conjunction with a few other expensive and time-consuming procedures of which the combined goal is to improve the prosthetic forecast of a tooth. If a tooth, because of its relative lack of solid tooth structure, also requires a post and core, and thus, endodontic treatment, the total combined time, effort and cost of the various procedures, as well as the impaired prognosis due to the combined inherent failure rates of each procedure, might combine to make it reasonable to have the tooth extracted. If the patient and the extraction site make for eligible candidates, it might be possible to have an implant placed and restored with more esthetic, timely, inexpensive and reliable results. It is important to consider the many options available during the treatment planning stages of dental care.

A better alternative to surgical crown lengthening is orthodontic forced eruption, it is simple, it is non-invasive, does not remove or damage the bone and is cost effective. The tooth is extruded a couple of millimeters with simple bracketing of adjacent teeth and using light forces this will only take a couple of months. A simple fiberotomy is performed after crown lengthening and is easily performed by the general dentist. In many cases such as this one shown, surgery and extraction may be avoided if patient is treated orthodontically rather than periodontally.