Emma Thompson (born 15 April 1959) is a British actress, comedian and screenwriter. Her first major film role was in the 1989 romantic comedy The Tall Guy. In 1992, Thompson won multiple acting awards, including an Academy Award and a BAFTA Award for Best Actress, for her performance in the British drama Howards End. The following year Thompson garnered dual Academy Award nominations, as Best Actress for The Remains of the Day and as Best Supporting Actress for In the Name of the Father.

In 1995, Thompson scripted and starred in Sense and Sensibility, a film adaptation of the Jane Austen novel of the same name, which earned her an Academy Award for Best Adapted Screenplay and a BAFTA Award for Best Actress in a Leading Role among other awards. Other notable film and television credits have included the Harry Potter film series, Wit (2001), Love Actually (2003), Angels in America (2003), Nanny McPhee (2005), Stranger than Fiction (2006), Last Chance Harvey (2008), An Education (2009), and Nanny McPhee and the Big Bang (2009).

Thompson is a patron of the Refugee Council and president of the Teaching Awards.

Thompson was born in Paddington, London, England. Her father was the actor Eric Thompson, best known for having written and narrated The Magic Roundabout, shown on BBC children's television in the 1960s and 1970s. Her mother is the Scottish actress Phyllida Law. Thompson's younger sister is actress Sophie Thompson. Thompson has spent part of her life in Scotland and has stated that she "feel[s] Scottish".[1]

Thompson went to Camden School for Girls[2] and then read English at Newnham College at the University of Cambridge where she was a member (along with fellow actors Stephen Fry, Hugh Laurie and Tony Slattery) and vice-president of the university's comedy troupe, the Footlights. Her acting talent was so impressive that agent Richard Armitage signed her to a contract while she was still two years away from graduation. Thompson graduated from Cambridge in 1980. Shortly afterward, she came to fame with a leading role opposite Robert Lindsay in the Leicester Haymarket Theatre's production of the musical Me and My Girl, which had just been rescripted by Stephen Fry.

Thompson's earliest television appearances included the comedy sketch show Alfresco, broadcast in 1983 and 1984 (as well as its three-part pilot There's Nothing to Worry About, shown in 1982), which also featured Ben Elton, Stephen Fry and Hugh Laurie. Also in 1984 she guested alongside Fry and Laurie in the episode "Bambi" of the sitcom The Young Ones, playing Miss Money-Sterling. Her breakthrough began in 1987 with her role as red-haired rock guitarist Suzi Kettles in the cult TV series Tutti Frutti. This was followed by acclaim for the BBC series Fortunes of War in which she starred with her then future husband, Kenneth Branagh. For these two 1987 roles she won a BAFTA for Best Actress. In 1988, she starred in and wrote the eponymous Thompson comedy sketch series for BBC1; the series was not successful with audiences or critics. Described in Time Out magazine as "very clever-little-me-ish",[citation needed] it has never been repeated in Britain despite her Oscar successes, and Thompson has not returned to the sketch comedy field.

Thompson's first major film role was in Richard Curtis's romantic comedy The Tall Guy (1989) co-starring Jeff Goldblum. Her career took a more serious turn with a series of critically acclaimed performances and films, beginning with Howards End (1992), for which she received an Oscar for best actress; the part of Gareth Peirce, the lawyer for the Guildford Four, in In the Name of the Father; The Remains of the Day opposite Anthony Hopkins; and as the British painter Dora Carrington in the film Carrington.

Thompson won her next Oscar in 1996, for best adapted screenplay for her adaptation of Jane Austen's Sense and Sensibility, a film directed by Ang Lee, in which she also played the Oscar-nominated lead role opposite Hugh Grant. She has said that she keeps both of her award statues in her downstairs bathroom, citing embarrassment at placing them in a more prominent place.[3]

Thompson's recent television work has included a starring role in the 2001 HBO drama Wit, in which she played a dying cancer patient, and 2003's Angels in America, playing multiple roles, including one of the titular angels. Her Emmy Award was as a guest star in a 1997 episode of the show Ellen; in this episode she played a fictionalised parody of herself: a closeted lesbian more concerned with the media finding out she is actually American. She also appeared in an episode of Cheers in 1992 titled "One Hugs, the Other Doesn't". 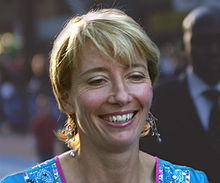 Thompson at the London premiere of Nanny McPhee, 2005

More recently, Thompson appeared in supporting roles such as Sybill Trelawney in Harry Potter and the Prisoner of Azkaban and Harry Potter and the Order of the Phoenix. In 2002, she voiced Captain Amelia in Disney's Treasure Planet, an adaptation of Treasure Island. She also appeared in the 2003 comedy Love Actually. The film Nanny McPhee, adapted by Thompson from Christianna Brand's Nurse Matilda books, was first released in October 2005. Thompson worked on the project for nine years, having written the screenplay and starred alongside her mother (who has a cameo appearance). In the film Stranger than Fiction she plays an author planning on killing her main character, Harold Crick, who turns out to be a real person. Most recently, Thompson made a short uncredited cameo as a doctor introducing the cure for cancer in the form of measles in the latest film adaptation of I Am Legend, and starred in Last Chance Harvey opposite Dustin Hoffman, Eileen Atkins and Kathy Baker. In 2009, she appeared in An Education and The Boat That Rocked, the new Richard Curtis film, which also starred Gemma Arterton, Philip Seymour Hoffman, January Jones, Kenneth Branagh, Bill Nighy, Nick Frost, Jack Davenport and Rhys Ifans.

Thompson reprised her role as Sybill Trelawney in Harry Potter and the Deathly Hallows – Part 2.[4] She will also voice Queen Elinor in the upcoming 2012 Pixar film Brave.[citation needed]

While at Cambridge, Thompson was romantically involved with actor Hugh Laurie,[5] a fellow Footlights member and an undergraduate at Selwyn College, just across the road from Newnham. Thompson continues her friendship with Laurie.

She married actor Kenneth Branagh on 20 August 1989. They acted together several times, in the TV series Fortunes of War, and in hit movies such as Dead Again, Henry V and Much Ado About Nothing. They divorced in October 1995.

Thompson married actor Greg Wise in 2003 in Dunoon, Scotland, where she has a second home.[6] The couple have a daughter, Gaia Romilly, born in 1999. In 2003, the couple informally adopted a 16-year-old Rwandan refugee named Tindyebwa Agaba. They successfully resisted his deportation back to Rwanda, his family having been killed in the genocide.[7] 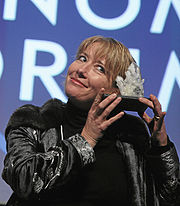 Thompson is a supporter of Greenpeace. It was announced on 13 January 2009 that, with three other members of the organisation, she had bought land near the village of Sipson, under threat from a proposed third runway for Heathrow Airport.[8] It was hoped that possession of the land, half the size of a football pitch, would make it possible to prevent the government from carrying through its plan to expand the airport.

Bought for an undisclosed sum from a local land owner, the plot was to be split into small squares and sold across the globe. Thompson said, "I don't understand how any government remotely serious about committing to reversing climate change can even consider these ridiculous plans. It's laughably hypocritical. That's why we've bought a plot on the runway. We'll stop this from happening even if we have to move in and plant vegetables."[9]

Thompson has said of her religious and political views: "I'm an atheist; I suppose you can call me a sort of libertarian anarchist. I regard religion with fear and suspicion. It's not enough to say that I don't believe in God. I actually regard the system as distressing: I am offended by some of the things said in the Bible and the Qur'an and I refute them."[10] Despite this, she says that the guiding moral principles, ethical principles and much of the philosophy of Christianity is very good and that she celebrates Christmas.[11] She told the BBC Andrew Marr Show in March 2010 that she had been a member of the Labour Party "all my life."[12] Thompson is also a Palestinian human rights activist, having been a member of the British-based ENOUGH! coalition that seeks to end the "Israeli occupation of the Gaza Strip and West Bank."[13]

In 2011, playwright, Gregory Murphy, accused Emma Thompson of misappropriating his Off-Broadway and West End theatre 2009 play and subsequent screenplay, "The Countess," about the bizarre "love triangle" between John Ruskin, Effie Gray and John Everett Millais.[14] Murphy asserts that copies of his play and screenplay were sent to her and her husband, Greg Wise, through a mutual friend. After obtaining a copy of a screenplay titled, "Effie", credited to Thompson and Wise, Murphy contacted the film's producers, noting that "Effie" was distinctly related to Murphy's own screenplay in its "time-frame, character development, structure and tone."[15]

Thompson asserts that she has never seen "The Countess", read its screenplay, or ever received a copy from the mutual friend, who is willing to testify that he never gave her a copy. She maintains that all similarities between "Effie" and "The Countess" are simply the result of them being based on the same historical events.[15]

Thompson met with Murphy at her home in an attempt to reach an agreement, and there followed over a number of months discussion of a possible writer's credit on the film and payment to Murphy. However no settlement could be reached to the satisfaction of both parties.

Thompson is expected to go into production on "Effie" in August 2011. However, she must "be able to demonstrate that there is no validity to Mr. Murphy's claim of infringement" to close the financing for the film.[14]

The following is a partial list of Thompson's theatre credit: