The Remains of the Day (film)

The Remains of the Day (film)

Infobox Film
name = The Remains of the Day 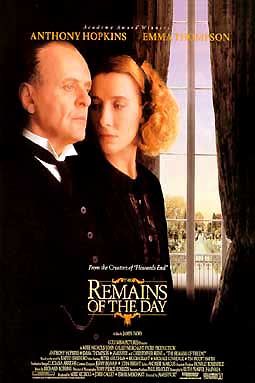 "The Remains of the Day" (1993) is a Merchant Ivory Film adapted by from the novel by . It was directed by James Ivory, produced by , and starred as Stevens and as Miss Kenton, with , , , and . The film was nominated for eight s.

In 1950s England, Mr. Stevens (Anthony Hopkins), the emotionally repressed butler of Darlington Hall, receives a letter from Miss Kenton (Emma Thompson), who worked with him as housekeeper during the run-up to the . Twenty years later, Lord Darlington (James Fox) has died and his stately country manor, Darlington Hall, has just been sold to the retired American Congressman Mr. Lewis (Christopher Reeve). Kenton reveals that her marriage has failed and she is nostalgic for the good old days when she worked at the house. Stevens (who is now one of the few servants left at the house) goes to visit Miss Kenton, ostensibly to persuade her to return to service.

The film flashes back to when Kenton first joins the staff as housekeeper. Darlington Hall is frequented by many politicians of the interwar period, who decide important affairs of state while there. Stevens, loyal and perfectionistic, calm and efficient, must manage the household so that the servants seem almost invisible. He clashes with Miss Kenton, but only displays an understated irritation; when his father dies, he continues his duties without pause. Kenton is equally efficient and strong-willed, but warmer and less repressed. Relations between them eventually warm, and Kenton even teases him. It becomes clear that she has fallen in love with him, and perhaps he with her, though this is left ambiguous. She tries to get through to him, but his emotional coldness is too great. When she cries in frustration, the only response he can muster is to call her attention to a domestic task. Finally, she strikes up a relationship with another man and marries him, leaving the house just before World War II breaks out.

Lord Darlington is a Nazi sympathiser, who uses his influence to broker the political arrangements now called "appeasement". But it is not clear to what extent he supports the Nazis' true agenda, or how much he is deceived by them. He irritates Congressman Lewis, one of the dignitaries at a conference, who argues in favour of the of professionals, rather than that of "honourable amateurs". After reading the work of , he commands two German-Jewish servant girls to be dismissed, considering their employment inappropriate. (Miss Kenton almost resigns in protest on this occasion, fearing that the girls will have to return to Germany.) Nevertheless, he later regrets his decision and asks Stevens to reinstate the girls, but they cannot be located. Darlington dies a broken man, his reputation destroyed after his role in the appeasement had been exposed in the . Subsequently, Stevens admits to being the butler at Darlington Hall, but initially denies having served or even met Darlington. He now recognizes his former master's failings, and also indicates that he has regrets about his own life, as does Miss Kenton (now Mrs. Benn). Kenton declines Stevens' offer to return to Darlington Hall, announcing instead that she wants to stay with her husband and soon-to-be-born grandchild. Stevens departs for Darlington Hall in a downpour of rain. Kenton cries, while Stevens, still unable to show any emotion or feeling toward her, simply raises his hat.

A film adaptation of the novel was originally to be directed by , from a script by . Nichols was ultimately one of the producers of the Merchant Ivory film.