Sense and Sensibility is a novel by the English novelist Jane Austen. Published in 1811, it was Austen's first published novel, which she wrote under the pseudonym "A Lady".

The story is about Elinor and Marianne, two daughters of Mr. Dashwood by his second wife. They have a younger sister, Margaret, and an older half-brother named John. When their father dies, the family estate passes to John, and the Dashwood women are left in reduced circumstances. The novel follows the Dashwood sisters to their new home, a cottage on a distant relative's property, where they experience both romance and heartbreak. The contrast between the sisters' characters is eventually resolved as they each find love and lasting happiness. Through the events in the novel, Elinor and Marianne encounter the sense and sensibility of life and love.

When Mr. Dashwood dies, his estate, Norland Park, passes directly to his only son and child of his first wife, John. His second wife, Mrs. Dashwood, and their daughters, Elinor, Marianne and Margaret, are left only a small income. On his deathbed, Mr. Dashwood extracts a promise from his son, that he will take care of his half-sisters; however, John's selfish and greedy wife, Fanny, soon persuades him to renege. John and Fanny immediately take up their place as the new owners of Norland, while the Dashwood women are reduced to the position of, rather unwelcome, guests. Mrs. Dashwood begins looking for somewhere else to live.

In the meantime, Fanny's brother, Edward Ferrars, a pleasant, unassuming, intelligent but reserved young man, visits Norland and soon forms an attachment with Elinor. Fanny disapproves the match and offends Mrs . Dashwood with the implication that Elinor is motivated by money rather than love. Mrs. Dashwood indignantly speeds her search for a new home.

Mrs. Dashwood moves her family to Barton Cottage in Devonshire, near the home of her cousin, Sir John Middleton. Their new home lacks many of the conveniences that they have been used to, however they are warmly received by Sir John, and welcomed into the local society, meeting his wife, Lady Middleton, his mother-in-law, Mrs. Jennings and his friend, the grave, quiet and gentlemanly Colonel Brandon. It soon becomes apparent that Colonel Brandon is attracted to Marianne, and Mrs. Jennings teases them about it. Marianne is not pleased as she considers Colonel Brandon, at thirty-five, to be an old bachelor incapable of falling in love, or inspiring love in anyone else. 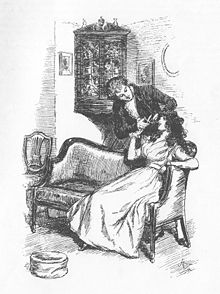 Marianne, out for a walk, gets caught in the rain, slips and sprains her ankle. The dashing, handsome John Willoughby sees the accident and assists her. Marianne quickly comes to admire his good looks and outspoken views on poetry, music, art and love. Mr. Willoughby's attentions are so overt that Elinor and Mrs. Dashwood begin to suspect that the couple are secretly engaged. Elinor cautions Marianne against her unguarded conduct, but Marianne refuses to check her emotions, believing this to be a falsehood. Unexpectedly one day, Mr. Willoughby informs the Dashwoods that his aunt is sending him to London on business, indefinitely. Marianne is distraught and abandons herself to her sorrow.

Edward Ferrars then pays a short visit to Barton Cottage but seems unhappy and out of sorts. Elinor fears that he no longer has feelings for her, but feels compelled, by a sense of duty, to protect her family from knowing her heartache. Soon after Edward departs, Anne and Lucy Steele, the vulgar and uneducated cousins of Lady Middleton, come to stay at Barton Park. With malicious intent, and clearly aware of their attachment, Lucy informs Elinor of her secret four year engagement to Edward Ferrars, displaying proofs of her veracity. Elinor comes to understand the inconsistencies of Edward's behaviour to her and acquits him of blame. She is charitable enough to pity Edward for being held to a loveless engagement by his gentlemanly honour.

As winter approaches, Elinor and Marianne accompany Mrs. Jennings' to London. Upon arriving, Marianne writes a series of letters to Mr. Willoughby which go unanswered. When they finally meet, Mr. Willoughby greets Marianne reluctantly and coldly, to her extreme distress. Soon Marianne receives a curt letter enclosing their former correspondence and love tokens, including a lock of her hair and informing her of his engagement to a young lady of large fortune. Marianne is devastated, and admits to Elinor that she and Willoughby were never engaged, but she loved him and he led her to believe he loved her. In sympathy for Marianne, and to illuminate his character, Colonel Brandon reveals to Elinor that Mr. Willoughby had seduced Brandon's fifteen-year-old ward, and abandoned her when she became pregnant.

In the meantime, the Steele sisters have come to London as guests of John and Fanny Dashwood. Lucy sees her invitation to the Dashwoods' as a personal compliment, rather than what it is, a slight to Elinor. In the false confidence of their popularity, Anne Steele betrays Lucy's secret. As a result the Misses Steele are turned out of the house, and Edward is entreated to break the engagement on pain of disinheritance. Edward, honourably, refuses to comply and is immediately disinherited in favour of his brother, gaining widespread respect for his gentlemanly conduct, and sympathy from Elinor and Marianne who understand how much he has sacrificed.

In her misery over Mr. Willoughby's marriage, Marianne neglects her health and becomes dangerously ill. Traumatised by rumours of her impending death, Mr. Willoughby arrives drunkenly to repent and reveals to Elinor that his love for Marianne was genuine. Threatened with disinheritance because of his immoral behaviour, he felt he must marry for money rather than love, but he elicits Elinor's pity because his choice has made him unhappy.

When Marianne is recovered, Elinor tells her of Mr. Willoughby's visit. Marianne comes to assess what has passed with sense rather than emotion, and sees that she could never have been happy with Mr Willoughby's immoral and expensive nature. She comes to value Elinor's conduct in a similar situation and resolves to model herself after Elinor's courage and good sense.

Upon learning that Lucy has married Mr. Ferrars, Elinor is grieved, until Edward himself arrives to reveal that Lucy has jilted him in favour of his wealthy brother, Robert Ferrars. Edward and Elinor are soon married and in a very few years Marianne marries Colonel Brandon.

Austen wrote the first draft of Elinor and Marianne (later retitled Sense and Sensibility) in epistolary form sometime around 1795 when she was about 19 years old.[1] While she had written a great deal of short fiction in her teens, Elinor and Marianne was her first full-length novel. The plot revolves around a contrast between Elinor's sense and Marianne's emotionalism; the two sisters may have been loosely based on the author and her beloved elder sister, Cassandra, with Austen casting Cassandra as the restrained and well-judging sister and herself as the emotional one.

Austen clearly intended to vindicate Elinor's sense and self-restraint, and on the simplest level, the novel may be read as a parody of the full-blown romanticism and sensibility (now "sensitivity") that was fashionable around the 1790s. Yet Austen's treatment of the two sisters is complex and multi-faceted. Austen biographer Claire Tomalin argues that Sense and Sensibility has a "wobble in its approach", which developed because Austen, in the course of writing the novel, gradually became less certain about whether sense or sensibility should triumph.[2] She endows Marianne with every attractive quality: intelligence, musical talent, frankness, and the capacity to love deeply. She also acknowledges that Willoughby, with all his faults, continues to love and, in some measure, appreciate Marianne. For these reasons, some readers find Marianne's ultimate marriage to Colonel Brandon an unsatisfactory ending.[3] The ending does, however, neatly join the themes of sense and sensibility by having the sensible sister marry her true love after long, romantic obstacles to their union, while the emotional sister finds happiness with a man whom she did not initially love, but who was an eminently sensible and satisfying choice of a husband.

In 1811, Thomas Egerton of the Military Library publishing house in London accepted the manuscript for publication, in three volumes. Austen paid for the book to be published and paid the publisher a commission on sales. The cost of publication was more than a third of Austen's annual household income of £460 (about £15,000 in 2008 currency).[4] She made a profit of £140 (almost £5,000 in 2008 currency)[5] on the first edition, which sold all 750 printed copies by July 1813. A second edition was advertised in October 1813