The Roman Catholic tradition includes a number of devotions to Jesus Christ. Like all Catholic devotions, these prayer forms are not part of the official public liturgy of the Church but are based on the popular spiritual practices of Roman Catholics. Many are officially approved by the Holy See as suitable for spiritual growth but not necessary for salvation.

Some devotions arise from private revelations, or personal religious experiences of saints. The Church has a tradition of thorough investigation of such private revelations and the lives of candidates for sainthood to assure that no natural or scientific explanation can, at the time of investigation, account for any miracles involved. Often an approved devotion of the Church has a particular prayer form, an image and sometimes specific promises for those who follow the devotion.

Formal references to this devotion began to first appear in the eleventh and twelfth centuries[1]. However, the most significant source for the devotion to the Sacred Heart in the form it is known today was Visitandine Saint Margaret Mary Alacoque (1647–1690), who claimed to have received visions of Jesus and Mary and that Jesus had permitted her to rest her head on his Heart. There is nothing to indicate that she had known the devotion prior to then, or at least that she had paid any attention to it.[citation needed]

After the requesting letters of Blessed Mary of the Divine Heart (1863–1899), on 11 June 1899, Pope Leo XIII solemnly consecrated all mankind to the Sacred Heart of Jesus. The Feast of the Sacred Heart is now a holy day in the Roman Catholic liturgical calendar, and is celebrated 19 days after Pentecost.

In the Roman Catholic tradition, the Sacred Heart has been closely associated with Acts of Reparation to Jesus Christ. In his encyclical Miserentissimus Redemptor Pope Pius XI stated: "the spirit of expiation or reparation has always had the first and foremost place in the worship given to the Most Sacred Heart of Jesus".[2]

Secondo Pia's negative of the image on the Shroud of Turin, used in the devotion to the Holy Face of Jesus.

This devotion dates back to Sister Marie of St. Peter, a Carmelite nun in Tours France who in 1843 reported visions of Jesus and Mary in which she was urged to spread the devotion to the Holy Face of Jesus, in reparation for the many insults Jesus suffered in His Passion. This resulted in The Golden Arrow Holy Face Devotion (Prayer) [3].

The devotion was further spread from Tours by the efforts of the Venerable Leo Dupont (known as the Apostle of the Holy Face) who prayed for the establishment of the devotion for 30 years, burning a lamp before a painted image of Jesus. The devotion was initiated shortly before Dupont's death and later influenced Saint Therese of Lisieux[4]. Pope Leo XIII approved of the devotion in 1885.

On the first Friday in Lent 1936, Sister Maria Pierina de Micheli, a nun born near Milan in Italy, reported a vision in which Jesus told her: "I will that My Face, which reflects the intimate pains of My Spirit, the suffering and the love of My Heart, be more honored. He who meditates upon Me, consoles Me". Further visions reportedly urged her to make a medal with the Holy Face based on the image from Secondo Pia's photograph of the Shroud of Turin.

In 1958, Pope Pius XII approved of the devotion and the Holy Face medal and confirmed the Feast of the Holy Face of Jesus as Shrove Tuesday (the Tuesday before Ash Wednesday) for all Roman Catholics[5][6].

The Chaplet of the Divine Mercy is based on the visions of Polish nun and canonized saint, Sister Faustina Kowalska (1905–1938), known as the "Apostle of Mercy". The chaplet is often said as a rosary-based prayer with the same set of rosary beads used for reciting the Holy Rosary or the Chaplet of Holy Wounds. However, the chaplet may also be said without beads, usually by counting prayers on the fingertips.[7]

Pope John Paul II was instrumental in the formal establishment of the Divine Mercy devotion and acknowledged the efforts of the Marian Fathers in its promotion in a Papal Blessing in 2001, the 70th anniversary of the revelation of the Divine Mercy Message and Devotion.

In the Roman Catholic tradition, at the moment of Consecration the elements (or "gifts" as they are termed for liturgical purposes) are transformed (Transubstantiation) into the actual Body and Blood of Christ. Catholic doctrine holds that the elements are not only spiritually transformed, but rather are actually (substantially) transformed into the Body and Blood of Christ. It is held that although the elements retain the appearance or "accidents" of bread and wine, they are indeed the actual Body, Blood, Soul, and Divinity of Christ. This is one form of the doctrine of Real Presence—the actual, substantive presence of Jesus in the Eucharist.

Some devotions have the form of spirit of reparation for the sufferings and insults that Jesus endured during His Passion or for the sin of blasphemy.

Pope John Paul II referred to such Acts of Reparation to Jesus Christ as the "unceasing effort to stand beside the endless crosses on which the Son of God continues to be crucified".[12] Pope Pius XI called these Acts of Reparation "some sort of compensation to be rendered for the injury" with respect to the sufferings of Jesus.[2]

IHS or JHS monogram of the name of Jesus

The veneration of the Holy Name was encouraged by the example of St. Bernard of Clairvaux, who apostrophized it in many sermons. But the greatest promoters of this devotion were St. Bernardino of Siena and his follower St. John Capistrano. "They carried with them on their missions in the turbulent cities of Italy a copy of the monogram of the Holy Name, surrounded by rays, painted on a wooden tablet, wherewith they blessed the sick and wrought great miracles. At the close of their sermons they exhibited this emblem to the faithful and asked them to prostrate themselves, to adore the Redeemer of mankind." (Catholic Encyclopedia) The practice of showing the monogram of Jesus over gates and above doors largely begins with their exhortations, which had an unorthodox air that brought Bernardino before the tribunal of Pope Martin V. But St. John Capistrano defended his master so successfully that the pope not only permitted the veneration of the Holy Name, but also assisted at a procession in which the holy monogram was carried. The tablet used by St. Bernardino is venerated at the basilica of Santa Maria in Aracoeli at Rome.

In the Holy Hour devotion an uninterrupted hour in spent in Eucharistic adoration in the presence of the Blessed Sacrament.[13] The official Raccolta book provides indulgences for this practice.[14]

The inspiration for the Holy Hour is Matthew 26:40.[15] In the Gospel of Matthew, during the agony in the Garden of Gethsemane the night before his crucifixion, Jesus spoke to his disciples, saying "My soul is sorrowful even to death. Remain here and keep watch with me." (Matthew 26:38) Returning to the disciples after prayer, he found them asleep and in Matthew 26:40 he asked Peter:

The five Holy Wounds of Christ were the five piercing wounds inflicted upon Jesus during his crucifixion. Two of the wounds were either through the hands or the lower wrists, two were through the feet, and the final wound was in the side of Jesus' chest, where, according to the New Testament, his body was pierced by a lance in order to be sure that he was dead. The Gospel of John states that blood and water poured out of this wound (John 19:34).

These wounds are not explicitly mentioned in any of the canonical Gospels until the Resurrection, although John the Evangelist states that no bones were broken. In the course of his Passion, Jesus suffered other wounds as well, such as those from the crown of thorns and from the flagellation.

Rosary of the Holy Wounds

The Rosary of the Holy Wounds was first introduced at the beginning of the 20th century by the Venerable Sister Mary Martha Chambon, a Roman Catholic nun of the Monastery of the Visitation Order in Chambéry, France.[7] She is currently awaiting beatification. It is different from the usual Rosary in that it does not follow the traditional rosary mysteries in sequence. 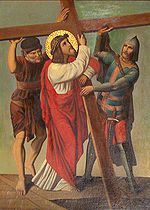 This prayer and devotion is attributed to Saint Bernard of Clairvaux[18] According to St. Bernard, he asked Jesus which was His greatest unrecorded suffering and the wound that inflicted the most pain on Him in Calvary and Jesus answered:

"I had on My Shoulder, while I bore My Cross on the Way of Sorrows, a grievous Wound which was more painful than the others and which is not recorded by men. Honor this Wound with thy devotion and I will grant thee whatsoever thou dost ask through its virtue and merit."

Stations of the Cross

The Stations of the Cross refers to the depiction of the final hours (or Passion) of Jesus, and the devotion commemorating the Passion. The tradition as chapel devotion began with St. Francis of Assisi and extended throughout the Roman Catholic Church in the medieval period. It became popular in the eleventh century, at a time when much Christian attention was focused on the Holy Land but few were able to actually visit. Great numbers of Europeans found an equivalent to walking the Via Dolorosa in following Christ's footsteps in spirit. The practice of the Stations of the Cross was a kind of miniature pilgrimage. The object of the Stations is to help the faithful to make a spiritual pilgrimage of prayer, through meditating upon the chief scenes of Christ's sufferings and death. It has become one of the most popular devotions for Roman Catholics,

The Roman Catholic Church teaches that the body, blood, soul and divinity of Jesus are contained in both consecrated bread and wine. But they remain as distinct Mysteries, mystically united.

The devotion to the Precious Blood was a special phenomenon of Flemish piety in the fifteenth and sixteenth centuries, that gave rise to the iconic image of Grace as the "Fountain of Life," filled with blood, pouring from the wounded "Lamb of God" or the "Holy Wounds" of Christ. The image, which was the subject of numerous Flemish paintings was in part spurred by the renowned relic of the Precious Blood, which had been noted in Bruges since the twelfth century[19] and which gave rise, from the late thirteenth century, to the observances, particular to Bruges, of the procession of the "Saint Sang" from its chapel.[20] Precious Blood Prayer: May the most Precious Blood which flowed from the most Holy wounds of our loving Lord Jesus pour over us, to wash, cleanse, purify, heal, guide, and protect us from all evil, harm, sickness, and bless and make us as Holy as we can be. We ask this in the Holy name of Jesus and through His most Precious Blood and His most Holy wounds. Amen. 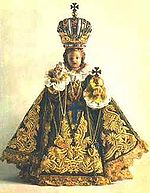 The Infant Jesus of Prague is a famous statue of infant Jesus in the Church of Our Lady Victorious in Malá Strana, Prague. The exact origin of the Infant Jesus statue was not truly known, but historical sources point to a small 28 cm high sculpture of the Holy Child with a bird in his right hand carved in around the year 1340. Many other Infant Jesus sculptures were also carved by famous masters throughout Europe in the Middle Ages.