'Atara (Arabic: عطارة‎ ′Atâra) is a Palestinian village in the Ramallah and al-Bireh Governorate, located 15 kilometers north of Ramallah in the central West Bank. A village of nearly 2,300 inhabitants,[1] it is situated along a mountain ridge line with four peaks and is built upon the second highest point in the West Bank at 810 meters above sea level.[2][3]

Nearby localities include Jifna to the south, Bir Zeit to the southwest, Kobar to the west, Ajjul to the northwest, Abwein to the north, Sinjil to the northeast and al-Mazra'a ash-Sharqiya to the east.[4] 'Atara's total land area consists of 9,545 dunams, most of which is cultivable.[3]

Edward Robinson identified 'Atara with the Biblical Ataroth mentioned in the Book of Joshua.[5]

In 1596, Atara appeared in Ottoman tax registers as being in the Nahiya of Quds of the Liwa of Quds. It had a population of 55 Muslim households and paid taxes on wheat, barley, olives, vines or fruit trees, and goats or beehives.[6]

In the 17th-19th centuries, 'Atara was located in the nahiya of Bani Zeid. Adult males were required to pay 58-60 akçe to the Ottoman government in Jerusalem.[7]

In 1922, the Jewish National Fund established a moshav on 500 dunams of land. Known as Ataroth, it was one of the first Zionist hill settlements. The original settlers were from Eastern Europe, and in 1947 numbered 200. During the 1936-1939 Arab disturbances, this moshav took heavy losses. Part of its land area was requisitioned by the British Army in order to build an air field. The moshav was depopulated on May 15, 1948. The group later resettled in Wilhelma, Palestine.[8]

In 2002, 95-year-old Atara resident Fatima Hassan became the oldest Palestinian fatality in the Second Intifada when the taxi she was in was shot at by Israeli soldiers. Witnesses said the car was waiting in a long line of cars and soldiers smashed the windows before firing. A military source said soldiers fired at the taxi after it ignored orders to halt on a prohibited road.[9]

'Atara contains two sanctuaries for saintly figures. The village's old mosque encases the Sanctuary of I'mar. There used to stand a Byzantine church.[3] 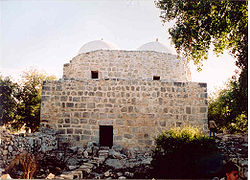 On the Dahrat Hamoud hill about 1.5km south-west of 'Atara, standing at about 820 meters above sea level, lays the Sanctuary of Sheikh al-Qatrawani. The shrine is one of a series of watchtowers overlooking the coast built by the Mamluks in the 16th century.[3] The sanctuary, built atop the ruins of an ancient Byzantine monastery, is visited by Palestinian Muslims to offer vows and Christians to rest in or near. The present sanctuary is made up of the shrine, the remains of the monastery, a cave and a cistern.[10]

According to local Islamic tradition, the sanctuary was named after a holy man named Sheikh Ahmad al-Qatrawani from the destroyed village of Qatra north of Gaza. Popular belief suggests that al-Qatrawani left his home town of Qatra due to his inability to fulfill his religious duties there, thus relocating to the deserted hill of Dar Hamouda where he "lived in prayer and self mortification". Another popular tale claims when al-Qatrawani died, his dead body descended onto the hilltop where his sanctuary stands.[10]

According to local legend from the town of Bir Zeit, nearby villagers found a Sufi derwish laying on the site and when asked of his origins, he said he was from Qatra and that angels brought him to the site where he would die. The residents of 'Atara, as well as nearby Ajjul and Silwad provided him with food and protection for four years and when they found him dead, they buried him just west of the sanctuary.[10]

Many Palestinian Christians argue, however, that the site was dedicated to Saint Catherine, suggesting the etymological origin of "Qatrawani" to be from "Catherine". Hamdan Taha points out similarities between the Muslim tradition of al-Qatrawani descending to his burial place at the time of his death to the Christian tradition of Saint Catherine descending to Mount Sinai at the time of her death.[10]

The modern building is a renovated version of the original building built in the late Mamluk era in the 16th century. The renovation took place in 1999 undertaken by the Palestinian Department of Antiquities. The sanctuary is a rectangular building 9.8 meters in width, and 5.9 meters in length. It has two semi-spherical domes, measuring 3.8 and 3.9 meters in diameter respectively. The eastern dome is built of finely cut stones, while the western dome is built of small rough field-stones, but both kinds are of local origin. The northern wall is 85 centimeters thick and is constructed of small stones, mortar and rubble. The eastern room of the sanctuary contains a mihrab ("prayer niche") with the typical orientation to Mecca as required in Islamic doctrine.[10]

The cistern, currently blocked, is in front of the shrine and most likely collected rainwater in the past for the sanctuary. It possibly also drew water from the nearby spring of Wadi as-Saqi, located two kilometers south of the site. To the west of the Sheikh al-Qatrawani sanctuary is a winepress cut through stone. Its basin is 1.8 meters deep and is coated with a layer of white plaster. A stone-cut cave is located in front of the shrine, but was blocked in 1984 by the residents of 'Atara for "safety reasons". In front of the building is a courtyard and the actual tomb of Sheikh al-Qatrawnani is located adjacently west of the site and has been plundered a number of times.[10]

Emigration surged between 1952 and 1955 to the Gulf Arab states, due to poor economic conditions in the West Bank. Several others moved to Ramallah and Jerusalem for work.[2] By 1961, the population was 1,110, however, it decreased tremendously after the 1967 Six-Day War, in which Israel captured and occupied the West Bank from Jordan. The village population slowly grew to 903 in 1982, then 976 in 1987.[14]

Until the early 1950s, 'Atara's inhabitants were dependent on agriculture as a main source of income. After 1967, many inhabitants began to work in Israel. As a result, agricultural production has been further reduced and a substantial portion of 'Atara's economy became dependent residents working abroad. Transportation is an issue in the village, with only one road being able to access through Bir Zeit.[2][3]

Eggs are a primary agricultural product and there are eleven egg farms in the village. Olives are also widely produced and are delivered to an oil pressing factory in the town of 'Arura, where olive oil is produced. Israeli checkpoints around 'Atara, as well as the harvest of 'Atara's olive crop by Israeli settlers from Ateret has effectively strained the village's economy.[2]