Chase Cameron Utley (pronounced /ˈʌtliː/; born December 17, 1978) is a second baseman for the Philadelphia Phillies of Major League Baseball. A native of the Greater Los Angeles area, he was raised in the city of Long Beach. He was a star baseball player at Long Beach Polytechnic High School, before moving on to UCLA. He now currently plays for the Philadlphia Phillies as a second basemen.

Utley bats left-handed and throws right-handed. Since becoming a permanent fixture as the Phillies' second baseman, Utley has demonstrated versatility, spending some time at first base as well. As his fielding has improved over his career, Utley is seen in combination with Jimmy Rollins as one of the best middle-infield combinations in the NL.[1] Utley is considered by fans to be a team leader, alongside Rollins and Ryan Howard.[2]

Utley played in the Cape Cod Baseball League for the Cotuit Kettleers, an amateur baseball team, in 1999 while he was still attending UCLA.[3] After his summer experience with Cotuit and college career, Utley was drafted by the Philadelphia Phillies in the first round (15th pick) of the 2000 amateur draft and played for the Phillies' farm system with the Batavia Muckdogs (A-short season; now a Cardinals affiliate) in 2000, the Clearwater Phillies (A, now Clearwater Threshers) in 2001, and the Scranton/Wilkes-Barre Red Barons (AAA; now a Yankees affiliate) in 2002 and 2003.[4]

In his first major league start, Utley recorded his first major league hit (a grand slam) before returning to Scranton/Wilkes-Barre. He was recalled by the Phillies again in August 2003, to replace Plácido Polanco at second base (Polanco was moved to third to compensate for the loss of third baseman David Bell to the disabled list). Utley recorded the final at-bat at Veterans Stadium by grounding into a game-ending double play on September 28, 2003.[5]

By the end of 2004, it became evident to management that Utley was the team’s future second baseman. However, a roster spot was not permanently available; his path to the majors was effectively blocked by Placido Polanco. During interleague play, he covered first base to give Jim Thome and Ryan Howard a chance to fill the role of DH, but this was not enough to keep his bat on the bench.[6]

Utley platooned with Polanco at second base during the start of the 2005 season. In June 2005, the Phillies traded Polanco to the Tigers for pitcher Ugueth Urbina and infielder Ramón Martínez. As a full-time starter Utley established himself as one of the best-hitting second basemen in the National League. He also proved his speed by stealing 16 bases in the 2005 season.[7]

Utley was a member of Team USA in the 2006 World Baseball Classic, and was selected by fans to start at second base for the National League at the 2006 Major League Baseball All-Star Game at PNC Park in Pittsburgh. In November, he traveled to Japan with other major league stars to compete against Japanese All-Stars.[8]

During the 2006 season, Utley maintained a 35-game hitting streak—the second-longest streak in Phillies history behind teammate Jimmy Rollins, who hit for 38 straight games between 2005 and 2006 (36 games in 2005 and two in 2006). Utley tied Luis Castillo, who had a 35-game hitting streak in 2002, for the longest hitting streak by a second baseman. Utley’s streak was also the longest for a purely left-handed hitter since Tommy Holmes' 37-game streak in 1945. As a result, Utley was named the National League Player of the Month for July 2006.[8]

On September 24, Utley hit two home runs in a 10–7 win over the Florida Marlins. It was his seventh multi-home run game of the 2006 season, tying a franchise record set in 1968 and tied by Ryan Howard in 2006. Utley combined with Jimmy Rollins in 2006 to become the first pair of middle infielders in National League history to hit 25 home runs each in the same season; Utley hit 32, while Rollins hit 25. He later received the Silver Slugger Award for being the best hitting second baseman in the National League. He also batted .309 in 2006.[8]

Utley hits a home run on March 11, 2007 against the Detroit Tigers during spring training.

After starting the season hot, Utley was selected by the fans to be the starting second baseman in the 2007 Major League Baseball All-Star Game, which was his second All-Star selection. However, later in the year, Utley was hit by a pitch thrown by Washington Nationals pitcher John Lannan; he broke the fourth metacarpal bone in his right hand. "I'll be back. Don't worry, guys," Utley said after the game. "It's a break, but not that bad of a break. I definitely expect to be back… this season." Utley had successful surgery on his hand, but as a result of the surgery, he was placed on the 15-day disabled list.[10] Utley returned to the lineup on August 27, hit a home run and an RBI double, went 3 for 5, and drew a curtain call from the hometown crowd.

Utley finished the season with a .332 batting average, 22 home runs, 103 RBIs and 48 doubles (second in the National League). He helped propel the Phillies to their first playoff appearance in fourteen seasons as the team capped a dramatic comeback by clinching the National League East division title on the final day of the regular season. Utley's offensive performance also earned him a Silver Slugger Award for the second consecutive season. 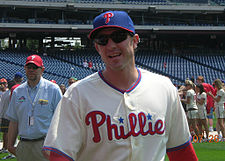 After his dynamic performance in the end of 2007, Utley picked up where he left off in the beginning of the 2008 season. He was an offensive catalyst in April, sparking win after win for the Phillies as they had their first winning April since 2003, and only their fourth since their last World Series appearance. Through the month of April, Utley hit a league-leading 11 home runs – including seven in the seven games from April 17–23. He completed a streak of five consecutive games with a home run, and hit .360 (good for fifth in the National League) in 111 at-bats on his way to becoming the National League's Player of the Month.[11] His five-game home run streak tied the Phillies franchise record, shared by Bobby Abreu (May 8–12, 2005), Mike Schmidt (June 6–10, 1979) and Dick Allen (May 27 – June 1, 1969).[12][13]

Though his bat cooled a bit in May (his monthly average was .259), Utley still hit eight more home runs in the month, breaking the Phillies franchise record for home runs before June[14] – Cy Williams (1923) and Ryan Howard (2006) shared the previous mark of 18 – and knocked in 26 RBIs. When Howard hit his 15th home run on May 30, he and Utley became the first pair of Phillies to hit 15 home runs each before June. On May 13, 2008, Utley received an unexpected accolade from lifelong baseball man (and 43rd US President) George W. Bush, who stated in an interview with politico.com that Utley would be the first position player he would select if he were an MLB team owner.[15]

On June 1, Utley hit his Major League-leading 20th home run and drove in his National League-leading 50th run as part of a comeback win against the Florida Marlins that propelled the Phillies back into first place in the National League East; the 1-for-2 performance capped a productive week for Utley that earned him the National League Player of the Week Award,[16] his fifth, for the first time since April 23–29, 2007. The next night, Utley hit another home run for another streak of five games with a longball amidst a span of eight games with seven home runs (from May 25 to June 2).[17] Utley hit the first in a set of back-to-back-to-back Philadelphia home runs in a 20–2 win over the St. Louis Cardinals on June 13, along with Ryan Howard and Pat Burrell. It was the seventh time that the Phillies had hit three consecutive home runs, the first time since May 18, 2004,[18] and the fourth occurrence by any team in the 2008 Major League Baseball season.[19][20][21]

Following the Phillies' explosive victory on the 13th, Utley went a career-long 0-for-24 in the midst of a 1-for-29 slump, during which the Phillies dropped a season-high six in a row.[22] On the 21st, Utley was benched for the first time this season, ending his streak of 101 consecutive games played.[23] On the 25th, Utley broke out of his skid with a 4-for-5 performance – his first four-hit game of the season – in a 4–0 shutout over the Oakland Athletics.[24] Utley was also selected to start his third consecutive All-Star game.[25] 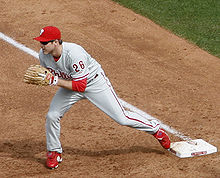 At the end of the 2008 regular season, with 33 home runs, 104 RBI, and a team high 177 hits, Utley helped the Phillies get into the 2008 playoffs, and win their first National League pennant since 1993 and first World Series title since 1980 (the second ever World Series title for the team). Utley batted 3 for 18 (.167) in the World Series, but hit two home runs and walked five times as well. Overall, he batted .220 in the postseason (11 for 50). The fans voted his fake and throw to home plate in Game 5 as the "This Year in Baseball Awards" Postseason Moment of the Year.[26]

Following the ensuing World Series parade on October 31, 2008, culminating in a celebration at Citizens Bank Park, Utley came up to the microphone after being introduced by Harry Kalas and said to the fans in the stadium: "World champions. World fucking champions!" The expletive was broadcast live on multiple Philadelphia television stations, which had not placed the celebration on tape delay.[27][28] 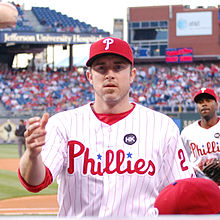 In 2009 he was named # 6 on the Sporting News' list of the 50 greatest current players in baseball. A panel of 100 baseball people, many of them members of the Baseball Hall of Fame and winners of major baseball awards, was polled to arrive at the list.[30]

He was the starter at second base for the National League All-Star team.

Utley also had a perfect stolen-base percentage in 2009, with 23 steals.

On October 28, Utley drew a two-out walk in the first inning of Game 1, setting a record for reaching base in consecutive postseason games (26). Utley hit two home runs in his next two at-bats, the first World Series game played in the new Yankee Stadium. With both home runs coming against left-hander CC Sabathia, Utley joined Babe Ruth as the second left-handed batter to hit two home runs in a World Series game against a left-handed pitcher.[32] On November 1, Utley hit another home run against Sabathia in Game 4, and one day later, Utley hit two home runs in Game 5, giving him a total of five for the series, tying Reggie Jackson for the most home runs in a World Series. After the season, Utley was named the winner of the National League's Silver Slugger at second base for the fourth consecutive season.

In December, Sports Illustrated named Utley as the second baseman on its MLB All-Decade Team.

On June 29, Utley was placed on the 15-day disabled list with a sprained thumb. He was voted into the All-Star Game as the starter at second base (for the fifth consecutive year), but was unable to play due to injury. He won a Fielding Bible Award for his statistically-based defensive excellence during the year.[33]

Utley was born in Pasadena, California. His batter introductory music in Philadelphia is the song "Kashmir" by Led Zeppelin.[34]

Both Utley and his wife Jennifer are avid animal lovers, having raised over $45,000 for the Pennsylvania Society for the Prevention of Cruelty to Animals.[35]

Utley was a college roommate of first baseman Garrett Atkins, and the two remain close. [36]

Utley appeared alongside teammate Ryan Howard as himself on the 2010 episode of It's Always Sunny in Philadelphia "The Gang Gets Stranded in the Woods".