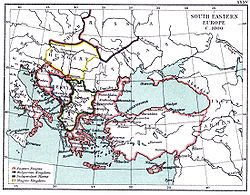 Territory of Bulgaria under the Cometopuli (around 1,000 AD.)

The Cometopuli dynasty (Bulgarian: Династия на комитопулите; Byzantine Greek: Κομητόπουλοι) was the last royal dynasty in the First Bulgarian Empire, ruling from ca. 976 until the fall of Bulgaria under Byzantine rule in 1018.[1] The most notable member of the dynasty, tsar Samuel is famous for successfully resisting Byzantine conquest for more than 40 years.

The actual name of the dynasty is not known. “Cometopuli” is merely the nickname which is used by Byzantine historians to address rulers from the dynasty as its founder, boyar Nikola, was a comes (governor, cognate to "count"; Byzantine Greek Κóμης, from the Latin; Bulgarian Комита Komita) probably of the region of Sredetz (the present-day capital of Bulgaria, Sofia). According to some sources the dynasty was of Armenian origin.[2][3] In 969 AD and following the Russian conquest of northeastern Bulgaria, count Nikola assumed control of the Bulgarian lands west of the Iskar. By the time of the Byzantine conquest of Preslav and the dethronement of Tsar Boris II in 972, Nikola had been killed and the rule assumed by his four sons, David, Aaron, Moses, and Samuil. David led the defence of southwestern Bulgaria and resided in Prespa, Moses of southeastern Bulgaria residing in Strumica, Aaron ruled over the region of Sredetz, whereas Samuel was in charge of northern Bulgaria with the town of Bdin (Vidin).

Both David and Moses lost their lives early – David was murdered by wandering Vlachs, whereas Moses died during the siege of Serres. A conflict broke out between Samuil and Aaron as the latter grew more and more pro-Byzantine and on June 14, 976 Aaron was executed near Dupnitza. Later the same year, the dethroned Boris II and his brother, Roman, managed to escape from captivity in Constantinople and reached the borders of Bulgaria. Boris II was, however, killed by mistake by the border guards. As a result, it was Roman who was crowned as Bulgarian Tsar although real power and the control of the army lay in the hands of Samuel. It was not until the death of Roman in 997 that Samuel (Samuil) was officially crowned as Tsar in the absence of any other direct heirs to the throne. After the death of Samuel in 1014, the crown passed on to his son, Gavril Radomir (1014 – 1015). In 1015, he was murdered by his first cousin and son of Aaron, Ivan Vladislav. With his own death in 1018 the First Bulgarian Empire came to an end. An attempt at restoration of Bulgarian independence was made some 20 years later by Peter (II) Delyan (1040-1041), son of Gavril Radomir. He, aided by his cousin Alusian organised an uprising and managed to push away the Byzantines from Ohrid for a short period, but was eventually betrayed by Alusian. Alusian's heirs were given noble titles and land in the Byzantine Empire.

After the fall of Bulgaria, Samuel's descendants assumed important positions in the Byzantine court after they were resettled and given lands in Asia Minor and Armenia. Оne of his granddaughters, Catherine, became empress of Byzantium. Another grandchild, Peter II Delyan, led an attempt to restore the Bulgarian Empire after a major uprising in 1040 – 1041. Two other women of the dynasty became Byzantine empresses,[4] while many nobles served in the army as strategos or became governors of various provinces. 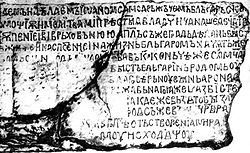 The Bitola inscription of Ivan Vladislav, where he claims Bulgarian origin to himself and to his people.

There has been a debate among historians, in which some view the empire during the reign of the Cometopuli as a separate entity from the First Bulgarian Empire. The Byzantinologist George Ostrogorsky discusses the issue and concludes that to its creators and to the Byzantines it was simply Bulgarian kingdom, but for various geographical, political and religious factors he labels their state Macedonian Empire.[5][6] Dimitri Obolensky, another Byzantinologist, refers to Samuil's state as an "independend empire of Western Bulgaria" that originated in Macedonia.[7] The Cometopuli kept the title "Emperor of Bulgarians", but some aspects that appeared during their reign, made their state differ from the Bulgarian empire.[8][9] Some other authors also distinguish it as a Western Bulgarian Empire, but most of the scholars see the dynasty as a direct continuation of the First Bulgarian Empire. However in the Republic of Macedonia the official state historiography refers to it as "Slavic Macedonian", or even "ethnic Macedonian" Empire.[10]