Seekonk is a town in Bristol County, Massachusetts, United States, on the Massachusetts border. It was incorporated in 1812 from the western half of Rehoboth. The population was 13,722 at the 2010 census. Until 1862, the town of Seekonk also included what is now the City of East Providence, Rhode Island. The land in the western half of the town was given to Rhode Island by the United States Supreme Court as part of a longstanding boundary dispute with Massachusetts.[1]

The first inhabitants of Seekonk were Native Americans from the Wampanoag Tribe. The name Wampanoag means People of the Morning Light. This name refers to the geographical area of the tribe. Living in the East they would be the first people to greet the sun each morning. The area now known as Seekonk and Rehoboth provided agricultural and water resources with abundant food supplies. During the warm summer months the Natives spent time near the rivers and oceans in what is now Southeastern Massachusetts. In the winter months the Natives lived inland, including several locations in Seekonk. At one time there were three Native American villages in the area we now call Seekonk.

There have been many spellings of the name Seekonk. Some of the various spellings include Seconch, Sink Hunk, Secquncke, Seaconke, and Squannakonk. The symbol of the goose in flight is used on the Town Seal.

The chief of the Wampanoags at the time the colonists settled in Southeastern Massachusetts was known as Massasoit or Ossamequin. In English this name means yellow feather. Ossamequin's people had been seriously affected by a plague just prior to the arrival of the Pilgrims at Plymouth. A large number of Wampanoag Indians had been killed by this illness. Most historians believe this plague to have been yellow fever.

Massasoit decided to make a peace treaty with the new immigrants for a number of reasons. Perhaps the most important factor was that the Wampanoags were fearful of being overtaken by the Narragansett Indians who lived nearby. Ossamequin believed an alliance with the English would help to secure the safety of his people.

In 1641, the local Native Americans had granted a large part of modern-day Seekonk to purchasers from Hingham, including Edward Gilman Sr., Joseph Peck, John Leavitt and others.[2] In 1653 Ossamequin and his son Wamsetto, also known as Alexander to the English, signed a deed granting the land that is now Seekonk and the surrounding communities to Thomas Willitt, Myles Standish and Josiah Winslow.

The Wampanoags were paid 35 pounds sterling by the English settlers, for instance, for the sale to Willitt, Standish and Winslow.

Three of the earliest English men to settle in the area now known as Seekonk and Providence were William Blackstone, Roger Williams and Samuel Newman. These men and their followers proved it was possible to provide a living away from the coastal areas. This allowed groups of individuals to separate themselves from Puritan control. In turn this led to a greater diversity of culture and religious and philosophical freedom. It was only by forming alliances with the Native Americans in both the Wampanoag and Narragansett tribes that these early settlements were able to flourish.

Massasoit lived until he was 80 years old. While he lived, his people and the settlers lived in relative peace. He was followed in power by his son Wamsetto, also known as Alexander. This chief died shortly after his father and was replaced by his brother Metacomet, also known as King Philip.

In 1675, King Philip's War began and both sides saw this as an opportunity to claim the land for their people and their way of life. Metacomet and his people ultimately lost the war, and the chief was killed by a mixed group of English and Indian fighters led by Benjamin Church. He was beheaded and his head stayed on public display on a pole in Plymouth for 25 years.

For the next 200 years the area we now call Seekonk was primarily a farming community. Accounts of Town Meetings during these years communicate just how contentious deciding what was best for this area could be. Boundary disputes were common and the land that is now Rehoboth, East Providence, Pawtucket and Seekonk was claimed by both Rhode Island and Massachusetts. In 1812 the border disputes were settled by the courts and the present town of Seekonk was incorporated. Two industrial villages developed to supplement the agricultural economy, with such businesses as the Rumford Chemical Works, but what had been the industrial area of the town in the late 18th and early 19th century was lost when East Providence was incorporated in 1862 taking half of the town's territory, two-thirds of its valuation and more than two-thirds of its population. The town remained basically agricultural into the 20th century, although the Kent Manufacturing Company did make tennis racquets and croquet sets on the upper reaches of the Tenmile River. With the opening of the Providence and Taunton street railway in 1891, Seekonk became increasingly a residential suburb of Providence.

Very few farms still exist in Seekonk. Developers have turned the farms into housing divisions and Seekonk is used largely as a suburban home community for people who work in the Rhode Island and Boston areas. It is now well known for its retail area along Route 6, which includes a movie multiplex, many different chain stores and restaurants, the Seekonk Speedway, a "fast track" destination for ARC or auto racing club, as well as the Seekonk Golf Driving Range with batting cages and new miniature golf. Although there has been a great deal of building in Seekonk since the Wampanoags first lived here you can still see many of the "black" Canada geese which give the town its name. 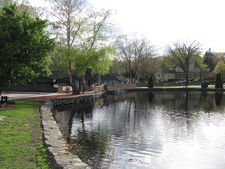 According to the United States Census Bureau, the town has a total area of 18.4 square miles (48 km2), of which, 18.3 square miles (47 km2) of it is land and 0.1 square miles (0.26 km2) of it is water. The total area is 0.54% water. It is bordered by Rehoboth to the east, Barrington, Rhode Island and Swansea to the south, East Providence and Pawtucket, Rhode Island to the west, and Attleboro to the north. Much of the population is concentrated in two areas; one, the Lebanon Mills and Perrins Crossing neighborhoods in the north, and the other, the southern neighborhoods of Luthers Corners and South Seekonk, mostly located between Interstate 195 and Route 44. Seekonk is just five miles (8 km) east of Providence, Rhode Island, and is 48 miles (77 km) southwest of Boston.

The town has three golf courses (Ledgemont, Pawtucket and Firefly) and one playground. Slater Memorial Park in Pawtucket lies just over the Seekonk line, next to Pawtucket Country Club. The Town lies within two watershed areas, the Ten Mile River Watershed and the Narragansett Bay Watershed.

The town can be accessed through one interstate, I-195, as well as Route 6, Route 44, Route 152 and Route 114A. Seekonk has its own exit on I-195, Massachusetts Exit 1, Route 114A, which provides easy access to Route 6 to the south and Route 44 to the north. Route 152, while not connected to any other state route in town, is a major route running between East Providence and Attleboro.

From the north end of town, easy access can be had to Interstate 95 and the South Attleboro stop of the MBTA's commuter line between Providence and Boston. That end of town is also served by a regional transit authority, the Greater Attleboro Taunton Regional Transit Authority (GATRA). The town's nearest airport is T.F. Green Airport in Rhode Island, 13 miles (21 km) away. Logan International Airport is the nearest international airport, 50 miles (80 km) away.

There were 4,843 households out of which 35.7% had children under the age of 18 living with them, 67.6% are married couples living together, 9.5% had a female householder with no husband present, and 20.0% were non-families. 16.8% of all households were made up of individuals and 8.8% had someone living alone who was 65 years of age or older. The average household size was 2.77 and the average family size was 3.12.

On the state level, Seekonk is part of the Fourth Bristol state representative district, including Rehoboth and parts of Norton and Swansea, and the Bristol and Norton state senatorial district, including part of the city of Attleboro and all or parts of the towns of Dover, Foxborough, Mansfield, Medfield, Norton, Rehoboth, Sharon and Walpole. Seekonk's state representative is Steve Howitt representing the 4th Bristol District. Seekonk is patrolled by Troop D (Southeast District), 4th Barracks (located in Middleborough) of the Massachusetts State Police. On the national level, the town is part of Massachusetts Congressional District 3, which is represented by Jim McGovern. The state's junior (Class I) Senator is Scott Brown, and the state's senior (Class II) Senator, is John F. Kerry.

Seekonk is governed by an open town meeting led by a board of selectmen. The town has a central police station on Route 44, and a central post office at the corner of Routes 44 and 114A. The Seekonk Public Library is located near the center of town along Route 152. The town also has a branch of the YMCA.

The Seekonk Fire Department provides fire and EMS services to the town. There are approximately 25 full-time firefighters, and 5 paid-per-call firefighters. The chief of the department is Alan Jack. The Fire Department operates the following stations and apparatus:

Seekonk has its own public school system, with five schools. The town has two elementary schools: Mildred H. Aitken Elementary School (serving the north and central parts of town), and George R. Martin Elementary School (serving the south). North Elementary School, which celebrated its 95th anniversary in 2006, was closed during the summer of 2006 due to budget cuts. Dr. Kevin M. Hurley Middle School, recently renamed for a popular town educator, is located along Route 152 and serves the entire town's 6th through 8th grade population. Seekonk High School is located near the center of town. Its athletics teams are nicknamed the "Warriors," and its school colors are light blue, white and dark blue, though traditionally the school colors are light blue and white. The school uses the "spear" logo made famous by Florida State University and, formerly, the Washington Redskins. Seekonk is the southernmost member of the Tri-County Regional Vocational Technical High School district, which is centered in Franklin. High school students may also choose to attend Bristol County Agricultural High School in Dighton, or any of a number of religious schools in the surrounding communities (the closest school in-state being Bishop Feehan High School in Attleboro).