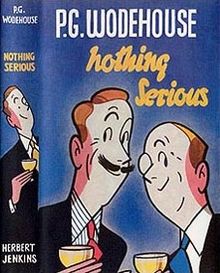 Nothing Serious is a collection of ten short stories by P. G. Wodehouse. It was first published in the United Kingdom on 21 July 1950 by Herbert Jenkins, London, and in the United States on 24 May 1951 by Doubleday & Co., New York.

It is a mixed bag of stories, mostly featuring appearances from several of Wodehouse's recurring characters, including two Drones Club stories (the first about Bingo Little and another about Freddie Widgeon), five Oldest Member golf stories, one Blandings Castle, one independent, and one Ukridge story.