Money in the Bank (novel)

Money in the Bank (novel) 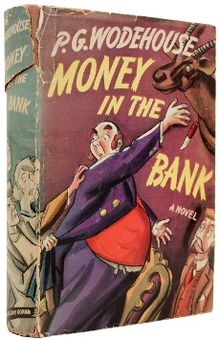 Money in the Bank is a novel by P. G. Wodehouse, first published in the United States on 19 January 1942 by Doubleday, Doran, New York, and in the United Kingdom on 27 May 1946 by Herbert Jenkins, London. The UK publication was delayed while Wodehouse was under suspicion of collaboration during World War II.

George, 6th Viscount Uffenham, a typically impecunious and absent-minded Wodehousian aristocrat, mislays his Aunt's fortune in diamonds, and is forced to let his family pile, returning there disguised as a butler named Cakebread to seek the gems.

The story also features the crooks Alexander "Chimp" Twist and "Dolly" and "Soapy" Molloy, who had earlier appeared in Sam the Sudden (1925) and Money for Nothing (1928).