Money for Nothing (novel)

Money for Nothing (novel) 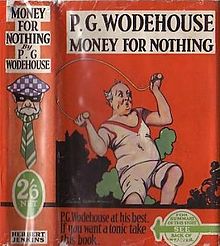 Money for Nothing is a novel by P. G. Wodehouse, first published in the United Kingdom on 27 July 1928 by Herbert Jenkins, London, and in the United States on 28 September 1928 by Doubleday, Doran, New York. Immediately prior to publication it appeared as a serial, in London Calling magazine (UK) from 3 March to 28 July 1928 and in Liberty magazine (US) between 16 June and 22 September 1928.

The action is mostly set at Rudge Hall, home to miser Lester Carmody, and at Healthward Ho, a health farm run by "Chimp" Twist, along with his cohorts "Soapy" and "Dolly" Molloy, who all previously appeared in Sam the Sudden (1925), and returned in Money in the Bank (1946).