The Adventures of Sally

The Adventures of Sally 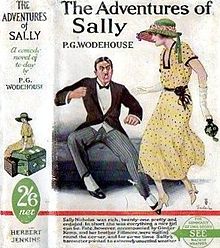 The Adventures of Sally is a novel by P. G. Wodehouse. It appeared as a serial in Collier's Weekly magazine in the United States from 8 October to 31 December 1921, and in the Grand Magazine in the United Kingdom from April to July 1922. It was first published as a book in the UK by Herbert Jenkins, London, on October 17, 1922, and in the US by George H. Doran, New York, on March 23, 1923, under the title Mostly Sally. It was serialised again, under this second title, in The Household Magazine from November 1925 to April 1926.

The story concerns a young American girl named Sally, who inherits a considerable fortune and finds her life turned upside down.