A Damsel in Distress (film)

A Damsel in Distress (film) 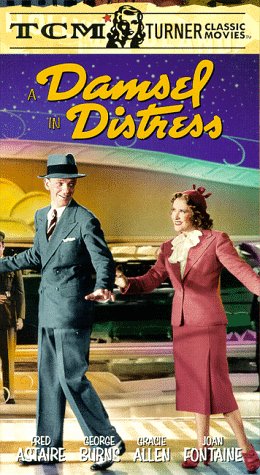 "A Damsel in Distress" () is a 1937 English-themed Hollywood musical comedy starring , , , and . With a screenplay by , loosely based on his novel of the same name, music and lyrics by George and , it is directed by .

The film was made at George Gershwin's instigation, an enthusiasm that Wodehouse mischievously attributed

The first Astaire RKO film not to feature , the nineteen year-old Fontaine was chosen, with drafted in to provide the comedy. It soon emerged that Fontaine couldn't dance, but Stevens persuaded Astaire not to replace her with .

The choreography explores dancing around, past, and through obstacles, and in confined spaces.

* "": sung by Astaire while executing a tap solo with cane in the middle of a street and escaping on a bus.
* "Put Me to the Test": Astaire, Burns, and Allen comic tap dance with whisk brooms, a routine inspired by vaudeville duo Evans and Evans and introduced to Astaire by Burns, who quipped: "Gracie and I ended up teaching Astaire how to dance".