The Heart of a Goof

The Heart of a Goof 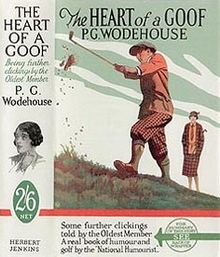 The Heart of a Goof is a collection of nine short stories by English comic writer P. G. Wodehouse. It was first published in the United Kingdom on April 15, 1926 by Herbert Jenkins, and in the United States on March 4, 1927 by George H. Doran, New York, under the title Divots.

The stories all concern golf, and are told by the Oldest Member; the book can be considered a sequel to The Clicking of Cuthbert (1922).

The original story titles and publication dates were as follows: