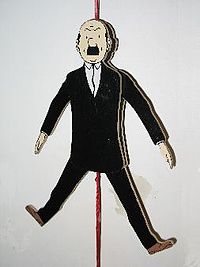 This wooden toy depicts Thompson, albeit without his characteristic bowler hat. The detective's moustache does not flare out like Thomson's. When the red string is pulled, his arms and legs move.

Thomson and Thompson (original French: Dupont et Dupond) are fictional characters in The Adventures of Tintin, the series of classic Belgian comic books written and illustrated by Hergé. Thomson and Thompson are detectives of Scotland Yard, and are as incompetent as they are necessary comic relief. While the two are apparently not related as they have different surnames, they are twice referred to as twins or brothers in the original language version of the series.[1] In any case, the two detectives look like twins and can only be told apart by the shape of their moustaches (Thomson's moustache flares out a tiny bit on each side at the bottom).

They are afflicted with spoonerism, are extremely clumsy, are thoroughly incompetent, and usually bent on arresting the wrong character. In spite of this, they somehow get entrusted with delicate missions, such as ensuring security for the Syldavian space project or investigating arms dealing.

The detective with the flared moustache is Thomson (without a "p"), who often describes himself as "Thomson, without a 'p,' as in Venezuela!" and who often remarks, "To be precise...". The detective with the flat moustache has described himself as "Thompson with a 'P,' as in..." and then used words with either a silent "P," or in which the "P" is combined with another letter, losing the "P" sound, such as Philadelphia, psychology and so on.

The first appearance of Thomson and Thompson was in Cigars of the Pharaoh, when they came into conflict with Tintin on board a ship where he and Snowy were enjoying a holiday cruise. When this adventure was first published in 1932 they were referred to as X33 and X33bis (or X33 and X33b). On this occasion they showed an unusually high level of cunning and efficiency, going to great lengths to rescue Tintin from the firing squad in disguises that fooled even him, and saving Snowy from sacrifice.

In this and other early stories like The Blue Lotus and The Black Island, they would spend most of their time pursuing Tintin himself for crimes he had not committed- although on both occasions they were forced to follow official orders and faked evidence, the two noting in Blue Lotus that they never believed in Tintin's guilt even if they had to obey their orders, although they later reconciled with him and became firm allies in subsequent stories.

In spite of the codenames mentioned above, they remained nameless in the early adventures, including The Blue Lotus, The Broken Ear and The Black Island. It was not until King Ottokar's Sceptre, published in 1938, that Tintin mentions their definitive names when introducing them to Professor Alembick at the airport.

While the original version of Cigars of the Pharaoh came out in 1932, the rewritten and redrawn version was issued in 1955, and the English version was not issued until 1971. This resulted in some chronological confusion for new readers of the Tintin series, which is why the text hints that Tintin already knew the pair, and was surprised at their unfriendly behavior; however, on the original chronological sequence, this was indeed the first time they ever met.

Thomson and Thompson also appear in a retcon on the very first page of the 1946 remake of Tintin in the Congo though they keep at a distance, looking on as Tintin, surrounded by admirers, sets off for the Congo. A remark made by one of them implies that at that stage they do not even know Tintin by name, only reputation. (In the original publication, made in the 1930s, this remark is made by a railway worker chatting to a colleague.)

The detectives usually wear bowler hats and carry walking sticks, except when abroad: during those missions they insist on wearing the stereotypical costume of the country they are visiting so that they can blend into the local population, but in general they only manage to find some ridiculous folkloric attire that actually makes them more conspicuous and leads to trouble.

Thomson and Thompson were originally only side characters but later became more important. In the redrawings of the earlier books, especially The Black Island, the detectives gained their now-traditional mannerisms.

In Land of Black Gold, the detectives mistakenly swallow some pills that caused them to sprout immensely long beards that change color constantly. The condition wears off by the end of this adventure, but it relapses in Explorers on the Moon, causing problems when the captain must continuously cut their hair, repeatedly switching back to re-cut floor length hair (and mustaches and beards) which all grow back in seconds.

In the 19 books following Cigars of the Pharaoh (not including the unfinished Tintin and Alph-Art or the book of the film Tintin and the Lake of Sharks), Thomson and Thompson appear in 17 of them, not appearing in Tintin in Tibet or Flight 714, although in some books their role is minor. The duo's appearance in The Shooting Star is confined to two panels (if you're looking closely at the crowd). During most of these appearances, they serve as the official investigators into whatever crimes Tintin is currently investigating, although their role in some of the presented cases is fairly minor; they appear briefly at the beginning of The Broken Ear before being tricked into closing the case in the belief that the stolen object has been returned when it was actually replaced by a fake, and are imprisoned and face execution on false charges in Tintin and the Picaros.

Simon Pegg and Nick Frost portray Thomson and Thompson in the Steven Spielberg and Peter Jackson motion capture movie adaptation The Adventures of Tintin: Secret of the Unicorn. 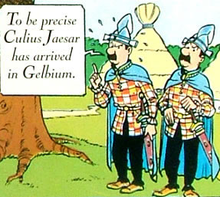 Thomson and Thompson as they appear in Asterix in Belgium

The detectives were physically based on Hergé's father and uncle, who were twins, both of whom wore matching bowlers. Another inspiration was a picture of two mustachioed, bowler-hatted, formally dressed detectives who were featured on the cover of the Le Miroir edition of March 2, 1919. They were shown escorting a criminal—one detective was handcuffed to the man while the other was holding both umbrellas.[2] In turn, the Thom(p)sons inspired the name of the British 1980s pop band, the Thompson Twins.

They also make a brief cameo appearance in the Astérix book Asterix in Belgium.

Names in other languages

In the original French, Dupont and Dupond are stereotypical surnames (akin to "Smith") and pronounced identically (IPA: [dypɔ̃]). Translators of the series have tried to find in each language names for the pair that are common, and similar or identical in pronunciation. They thus become:[4]

In some languages, like Greek, Japanese and Persian, the French forms are more directly adapted, using local orthographic ambiguities:

The original Dupont and Dupond are kept in Swedish, Danish, Norwegian, Turkish, Korean (as 뒤퐁과 뒤뽕[5]), Finnish, Italian, Basque, Catalan, the Casterman edition in Spanish, and the newer Portuguese editions.