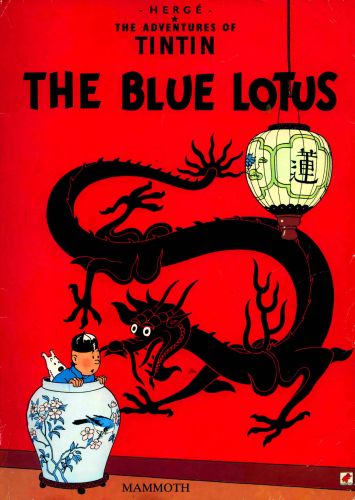 "The Blue Lotus" ( _fr. Le Lotus bleu), first published in , is one of "", a series of classic comic-strip albums written and illustrated by featuring young reporter Tintin as a hero. It is a sequel to "", with Tintin continuing his struggle against a major gang of drug smugglers. He also becomes involved in the resistance to the . "The Blue Lotus" is a pivotal work in Hergé's career, moving away from the stereotype and loosely connected stories and marking a new found commitment to geographical and cultural accuracy.

In "", Tintin pursued an international group of drug distributors through the and . He managed to capture most of the members, but not the mysterious leader, who fell down a in the mountains. Some time after these events, his body has still not been found. In order to unravel more of the network and stop the production at the source, Tintin travels to , , where he is awaited by the assassins of the opium consortium.

However, two attempts on Tintin's life are foiled by a young Chinese stranger who arranges to meet Tintin in a secluded area. Once Tintin arrives for their rendezvous, he discovers that the young man has been struck by Rajaijah juice, the poison of madness, used by the opium gang against their enemies.

While in Shanghai, Tintin meets , a ese businessman, who urges him to return to and protect his friend the Maharajah of Gaipajama.

Tintin also defends a young Chinese boy from a Western businessman and racist bully, Gibbons, a friend of Dawson, the corrupt police chief of the . Incensed, Gibbons and Dawson set about making life difficult for Tintin.

Having been persuaded by Mitsuhirato, Tintin is on his way back to India by ship when he is knocked unconscious and taken ashore along with Snowy. He wakes up outside Shanghai, in the home of , the leader of a brotherhood called "The Sons of the Dragon" dedicated to the fight against opium. Wang's son is the young man who helped save him on two occasions, but is now insane. He goes about threatening to cut people's heads off with a sword (thinking it will "show them the way") and only his father's stern authority can keep him in check.

Wang also reveals that Mitsuhirato is their chief opponent: a Japanese and drug smuggler. Tintin follows Mitsuhirato and sees him blowing up a railway line (this is based on the real-life ). No one is killed and damage is minor, but the event is successfully portrayed by the Japanese government as a major Chinese incident and used as a pretext for a Japanese invasion of .

Having obtained a sample of the poison of madness, Tintin returns to Shanghai, which has now been occupied by the Japanese Army, and tries to make contact with Doctor Fan Hsi-Ying, an expert on insanity, who may be able to cure Wang's son. However, Doctor Fan has been kidnapped by the opium gang, presumably to prevent him developing an antidote to the poison. A note left by the kidnappers demands ransom money which must be paid at an old temple in the city of Hukow.

After a brief period of imprisonment in Shanghai by the Japanese Army, Tintin escapes and rides a train to Hukow, but a flood washes the tracks, and all the passengers must disembark. He rescues a young boy, , from drowning in the . They become fast friends, and Chang rescues Tintin from the Thompsons who had reluctantly arrested him under orders from Dawson (who is collaborating with Mitsuhirato to capture Tintin). They later travel to the area where the ransom money is to be left, and are able to confirm that Doctor Fan has been kidnapped on Mitsuhirato's orders.

Tintin and Chang return to Shanghai, but Wang and his family are kidnapped by Mitsuhirato. In order to find them, Tintin travels to the Shanghai docks and hides in one of the barrels being unloaded from an opium ship. But it turns out that he was seen, and when he emerges he is confronted by Mitsuhirato armed with a gun, and soon finds himself a prisoner alongside Wang. Then the boss of the opium is revealed to be the film producer (see "" for back story). Tintin is incredulous that a man he had thought to be a friend could be the gang leader until Rastapopoulos reveals the tattoo of Kih-Oskh on his forearm. Fortunately, the Sons of the Dragon, who had previously overpowered Mitsuhirato's thugs and had hidden in the other barrels (as planned by Tintin), reveal themselves, and force Mitsuhirato and Rastapopoulos to surrender. With Rastapopoulos arrested, the drug ring is finally brought down, and Mitsuhirato commits . The ensuing political fallout over his involvement with the cartel and Japanese espionage leads to 's withdrawal from the .

The title, "Blue Lotus", refers to the name of an opium den, itself a reference to the blue lotus.

Up to the writing of "The Blue Lotus", Hergé's writing was mainly based on popular prejudice and on what his mentor, the , had told him about , the , Belgian in Africa or the , which was depicted as a nation of gangsters and cowboys and Indians of the sort found in Hollywood movies (though Hergé does sympathise with the Indians in the way they are forced off their land).

As Tintin was published in "", a newspaper supplement, and Hergé announced at the end of "Cigars" that his next setting would be China. Father Gosset, chaplain to the Chinese students at the , wrote to Hergé urging him to be sensitive about what he wrote about China, since it might offend his Chinese students. Hergé agreed, and in the spring of 1934 Gosset introduced him to /Chang Ch'ung-jen (known to Hergé as 'Chang Chong-chen'), a young sculpture student at the Brussels . The two young artists quickly became close friends, and Zhang introduced Hergé to , and the techniques of .

According to Hergé, before the meeting,he thought that it "was peopled by a vague,slit eyed who were very cruel, and would eat swallows nests,wear pigtails and throw children into rivers."Fact|date=August 2008

As a result of this experience, Hergé would strive in "The Blue Lotus", and in subsequent Tintin adventures, to be meticulously accurate in depicting the places which Tintin visited by painstakingly researching all his topics. When his UK publisher complained that "" depicted an old-fashioned England, Hergé sent to Britain to redraw anything that was no longer accurate, resulting in huge changes to the album. This new-found commitment to accuracy would become a Hergé trademark.

As a token of appreciation, he added a fictional "Chang" ("Tchang" in French) to "The Blue Lotus", a young Chinese boy who meets and befriends Tintin. Hergé lets Tintin explain to Chang that Chang's fear for the 'white devils' is based on prejudice and Chinese racism. He then recites a few Western stereotypes of the Chinese, confuting them.

As another result of his friendship with Zhang (Chang), Hergé became increasing aware of the problems of , in particular the ese Empire's advances into China. Tintin also rescues a Chinese boy from a racist bully Gibbons, who was a good friend of , the corrupt Police chief of the .

Tintin is a direct witness to the South Manchurian railway incident (), Japan's pretext to occupy the province of Manchuria from China. The Japanese and some European characters are portrayed in a negative light, and their cartoon forms are somewhat racist. The Japanese, including the character of and Japanese soldiers are shown with beaming teeth while the Chinese are shown as tight-lipped. As a result it drew sharp criticism from various parties, including a protest by Japanese diplomats to the Belgian Foreign Ministry.

The was so pleased with the album that its leader at the time, , invited Hergé for a visit. However, because of objections to the implied , the forbade the publication of the album for a long time. It finally allowed publication in 1984, but some controversial items were changed. For example the words 抵制日貨, dǐ zhì rì huò, "Down with Japanese products!" was changed to 大吉路, dà jí lù, "Great Luck road".

This adventure was originally published under the name "Tintin en Extrême-Orient" (literally "Tintin in the Far East").

The original version of "The Blue Lotus" was published in black-and-white in "" in 1934. It was later redrawn and colourised in 1946.

Many scenes that appeared in the original 1934 version were left out in 1946. They included:

*The fakir who performs tricks with glass and daggers and reads Tintin's palm is named as Cipacalouvishni.

*As the fakir warns him of the dangers to come, Tintin looks visibly more nervous in the 1934 version than in 1946.

*After firing the dart into the neck of the Chinese man at the Maharaja's palace, the fakir from "Cigars of the Pharaoh" can be seen hurrying away through the jungle.

*Tintin then tells the Maharaja that he will not leave for China until he knows the fakir is back in custody. They later receive a telegram announcing his recapture. Tintin, who has lost Snowy, decides to leave without him (these decisions were changed in later versions).

*When Tintin is jailed after bumping into a policeman, Dawson sends three tough men in to beat him up. In the original version they are British soldiers, from , and . Instead of Tintin, it is they who end up in hospital where an official pays tribute for their "sacrifice in the defence of their ideals" ! In 1946 the white soldiers are replaced by ns.

*While watching a newsreel in a cinema, Tintin sees footage of breaking the world land speed record in his high-powered Bluebird car.

*While searching the cellar of the Blue Lotus, Tintin opens a door and he and Chang come face-to-face with yet another gangster. Tintin tells Chang to follow his example, raise his arms and put down his gun. When the gangster bends down to pick up the guns, Tintin slams the door onto him, knocking him out. Chang then ties him up with rope.

*Pilchardanian Republic: A an , which resembles the pre- . It was mentioned during a , when Tintin hides in a movie theater.
*Mitsuhirato and his men capture a man they believe to be Tintin wearing a huge fake beard and wig. However it turns out to be genuine hair and beard: the man is in fact the consul for Poldavia, a play on of .