The Crab with the Golden Claws

The Crab with the Golden Claws

The Crab with the Golden Claws (French: Le Crabe aux pinces d'or) is the ninth of The Adventures of Tintin, a series of classic comic-strip albums, written and illustrated by Belgian writer and illustrator Hergé, featuring young reporter Tintin as a hero. It is also the first to feature Tintin's longtime friend, Captain Haddock.

Tintin is informed by the Thompsons of a case involving the ramblings of a drunken man, later killed, found with a scrap of paper from what appears to be a tin of crab-meat with the word Karaboudjan scrawled on it. His subsequent investigation and the kidnapping of a Japanese man interested in talking to him leads Tintin to a ship called Karaboudjan, where he is abducted by a syndicate of criminals who have been hiding opium in the crab tins. Tintin escapes from his locked room after Snowy chews through his bonds and Tintin knocks out a man sent to bring him food. He leaves him bound and gagged in the room. Tintin encounters Captain Haddock, an alcoholic who is manipulated by his first mate, Allan, and is unaware of his crew's criminal activities. Tintin hides in the locker under the bed and defeats Jumbo, the sailor left in the cabin, as Tintin is thought by Allen to have climbed out of the porthole. The Mate finds Jumbo tied to a chair and gagged. Escaping the ship in a lifeboat in an attempt to reach Spain, they are attacked by a seaplane. They hijack the plane and tie up the pilots, but a storm and Haddock's drunken behaviour causes them to crash-land in the Sahara.

After trekking across the desert, Tintin and Haddock reach a Moroccan port, but the Captain is kidnapped by members of his old crew. Tintin tracks them down and saves the Captain, but they both become intoxicated by the fumes from wine barrels breached in a shootout with the villains. Upon sobering up, Tintin discovers the necklace with the Crab with the Golden Claws on the now-subdued owner of the wine cellar, Omar Ben Salaad, and realizes that he is the leader of the drug cartel. After capturing Allan, the gang is put behind bars.

The Belgian comic book creator Georges Remi – who would become better known under his pen name of Hergé – first came up with the character of Tintin, a young boy reporter, whilst working at the right wing Belgian newspaper Le XXe Siècle (The 20th Century). Pioneering this new character in the story Tintin in the Land of the Soviets, this comic, which involved Tintin battling the socialist authorities in the Soviet Union, was serialised in Le XXe Siècle's supplement for children, Le Petit Vingtième (The Little Twentieth), from 10 January 1929 until 11 May 1930.[1] Proving a success, Hergé went on to pen a string of new Adventures of Tintin, sending his character to real locations such as the Belgian Congo, the United States, Egypt, India, China and the United Kingdom, and also to fictional countries of his own devising, such as the Latin American republic of San Theodoros and the East European kingdom of Syldavia.

As he produced these works, his political approach to the world began to change; the earliest books reflected the socially conservative, fascist and imperialistic attitudes of those for whom he worked.[2] As he got older, he became more critical of the political far right, with the eighth Tintin adventure, King Ottokar's Sceptre (1939), involving Tintin battling the forces of fictional fascist state Borduria, whose leader, named Müsstler, was a combination of Nazi German leader Adolf Hitler and Italian Fascist leader Benito Mussolini.[3] He continued this anti-German sentiment in his subsequent work, Land of Black Gold, in which the main antagonist, Dr Müller, is a German intent on sabotaging the oil supply in the British Mandate of Palestine.[4] 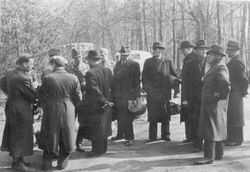 Himself an anti-fascist, Hergé focused his Adventures of Tintin on non-political themes to avoid trouble with the Gestapo (pictured here) during the period of Nazi occupation.

Then, in November 1939, Nazi Germany invaded Belgium as World War II broke out across Europe, and although Hergé initially considered fleeing into a self-imposed exile, he ultimately decided to stay in his occupied homeland.[5] To ensure their own dominance, the Nazi authorities closed down Le XXe Siècle, leaving Hergé unemployed and his story Land of Black Gold unfinished.[4] In search of employment, he was given a job as an illustrator by Raymond de Becker, an executive of the popular newspaper Le Soir (The Evening), which was allowed to continue publication under German management.[6] On 17 October 1940 he was made editor of the paper's children's supplement, Le Soir Jeunesse, in which he set about producing new Tintin adventures, The Crab with the Golden Claws (1941) and then The Shooting Star (1942).[7] In this new, more repressive political climate, Hergé could no longer explore political themes in his Adventures of Tintin lest he be arrested by the Nazi secret police, the Gestapo. As Tintinologist Harry Thompson noted, Tintin's role as a reporter came to an end, to be replaced by his new role as an explorer, something which was not a politically sensitive topic.[8]

The Crab with the Golden Claws was first published in serial comic strip form in 1941.

The story was written after Hergé had been forced to abandon his previous story, Land of Black Gold, also set in the desert, when Nazi Germany took over Belgium. After the invasion, publication of Le Petit Vingtième, the children's newspaper supplement that had published his previous Tintin adventures, was stopped and Hergé had to look for another means of publication. In addition, Land of Black Gold featured controversial political matter, depicting the conflicts between Jews, Arabs and the British troops in the British Mandate of Palestine. Hergé was asked by the newspaper Le Soir to create a weekly supplement, similar to that of Le Petit Vingtième, called Le Soir Jeunesse, and he began work on a new story about the less controversial subject of drug smuggling.

The Crab With the Golden Claws appeared for the first time on October 17, 1940, and every week Hergé published two full pages. But the supplement disappeared again after September 3, 1941, due to paper shortage during World War II, when only 98 pages had appeared. The interruption continued until September 23 1941, when Hergé and Tintin got a daily strip in Le Soir. It continued for 24 days until the story was finished on October 18. This meant a major change in the method of working of Hergé, with a daily instead of a weekly publication, and a consequent rethinking of the layout of the comic and the rhythm of the storytelling. This version was republished as an album in 1941.

The strip was completely redrawn in colour for publication as an album in 1943.

In the 1960s, the book was published in America with a number of changes. In the original, the sailor Tintin leaves bound and gagged in Captain Haddock's cabin, and the man who beats Haddock in the cellar, are black Africans. These were changed in the 1960s to a white sailor and an Arab due to objections by American publishers of having blacks and whites mixing together. [9] However, Haddock still refers to the man who beat him as a "Negro" in the English version. Also at the request of the Americans, scenes of Haddock drinking directly from the bottles of whisky on the lifeboat and the plane were taken out.[10]

In an interview, Hergé sarcastically stated that these moves were "justified" because "Everyone knows that Americans never drink whisky(!)" and "that there are no blacks in America(!)".[11]

Main article: The Crab with the Golden Claws (film)

The Crab with the Golden Claws was adapted into a stop motion-animated feature film of the same name in 1947, produced by Wilfried Bouchery for Films Claude Misonne. It was the first ever film adaptation of Tintin and reproduces the story of the original comic almost exactly. It was first shown at the ABC Cinema on January 11, 1947 for a group of invited guests. It was screened publicly only once, on December 21 of that year, before Bouchery declared bankruptcy and fled to Argentina. All of the equipment was seized and a copy of the film is currently stored at Belgium's Cinémathèque Royale.[citation needed].

A motion capture film titled The Adventures of Tintin: Secret of the Unicorn directed by Steven Spielberg and produced by Peter Jackson is slated for a US release on December 21, 2011. The film was released in Europe at the end of October 2011.

A video-game tie-in to the movie has been announced at E3, June 6 with an unknown game release date.[citation needed]

In 1957, the animation company Belvision produced a string of colour adaptations based upon Hergé's original comics, adapting eight of the Adventures into a series of daily five-minute episodes. The Crab with the Golden Claws was the fifth such story to be adapted, being directed by Ray Goossens and written by Michel Greg, himself a well known comic book writer and illustrator who in later years would become editor-in-chief of the Journal De Tintin.[12]

In 1991, a second animated series based upon The Adventures of Tintin was produced, this time as a collaboration between the French studio Ellipse and the Canadian animation company Nelvana. Adapting 21 of the stories into a series of episodes, each 42 minutes long, The Crab with the Golden Claws was the seventh story to be produced into the series, with the story spanning two episodes. Directed by Stéphane Bernasconi, the series has been praised for being "generally faithful", with compositions having been actually directly taken from the panels in the original comic book.[13]

In The Simpsons episode In the Name of the Grandfather Lisa Simpson mentions Ireland is on the forefront of Europe's "tech-boom". Bart Simpson mockingly adds: "In your face, Belgium!", whereupon Marge threatens Bart with the words: "Bart! If you hate Belgium so much, maybe I should take your Tintins away!" This scares Bart, who clutches a copy of the album "The Crab with the Golden Claws", promising he'll be good.[14]