After debuting in 1990, Holly worked for Smoky Mountain Wrestling and other independent promotions, before joining WWE full-time in 1994. Initially portraying the character of a NASCAR driver, Thurman "Sparky" Plugg, his name was soon changed to Bob "Spark Plug" Holly, before forming a team with "Bodacious Bart", known as The New Midnight Express in 1998. After becoming known simply as "Hardcore Holly" in 1999, he was joined by on-screen cousins, Crash and Molly. In 2002, he suffered a broken neck, which sidelined him for over a year. Upon his return, after a major feud with Brock Lesnar, he engaged in minor feuds with wrestlers such as Mr. Kennedy and Rob Van Dam, before forming a tag team with Cody Rhodes in 2007. Holly was released from WWE in 2009.

Holly trained under Stan Frazier, Eddie Sullivan, Marcelle Pringle and Rip Tyler and debuted in 1987 in the Mobile area in the World Wrestling Organization promotion where he held titles on and off, including the WWO Tag Team Championship with Ron Starr.[2] He wrestled as "Superstar Bob Holly" and teamed regularly with Robert Gibson.[4]

From there, he wrestled in Memphis and then in the NWA with moderate success before briefly going to Smoky Mountain Wrestling in early 1992 where he wrestled as "Hollywood" Bob Holly.[4] 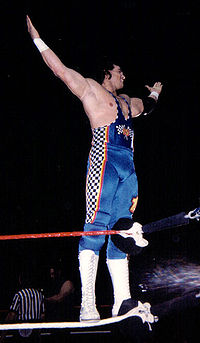 Holly debuted in the WWF on January 11, 1994.[4] His initial gimmick was that of a NASCAR driver turned wrestler called Thurman "Sparky" Plugg,[2][4] which was later changed to Bob "Spark Plug" Holly.[1][7]

At the Royal Rumble in January 1995, Holly and the 1-2-3 Kid defeated Bam Bam Bigelow and Tatanka in the finals of a tournament to crown new WWF Tag Team Champions.[8] Their title reign lasted only one day, however, as the next day, on WWF Monday Night Raw, Holly and the Kid lost the tag team title to The Smoking Gunns.[4][8]

On the May 7, 1995 (taped April 26, 1995) episode of WWF Action Zone, Holly pinned WWF Intercontinental Champion Jeff Jarrett to win the title; however, Jarrett had his foot on the ropes, which meant that the pin was illegal, and the title was vacated.[4][5] Later on in the show, Jarrett defeated Holly in a rematch for the vacant title after pinning Holly with a roll-up.[4] Holly's title win is not recognized by WWE.[4][5]At Summerslam 1995, Holly lost to Triple H. Holly made very few appearances in the WWF throughout 1996 and 1997.[4]

In February 1998, Holly and Bart Gunn joined forces with Jim Cornette as part of Jeff Jarrett's National Wrestling Alliance stable.[5] Holly, renamed "Bombastic Bob", and Gunn, renamed "Bodacious Bart" were known collectively as The New Midnight Express.[4] The New Midnight Express defeated The Headbangers for the NWA World Tag Team Championship on March 30, 1998[2] and held the titles until August 14 of that year, when they were defeated by The Border Patrol. They challenged The New Age Outlaws for the World Tag Team Championship at the King of the Ring pay-per-view, but were unsuccessful.[9]

In November 1998, Al Snow, Bob Holly and Scorpio united and formed the J.O.B. Squad. During that same month on an edition of Raw, they helped Mankind defeat Ken Shamrock and The Big Boss Man in a triple threat match. In February 1999, both Scorpio and the Blue Meanie were released by the WWF while Gillberg was later phased out of storylines. After dwindling down to only two members, Snow wrestled against himself on an edition of Raw before Holly came down to the ring to prevent Snow from hurting himself, which led to the formal breakup of the J.O.B. Squad. Later that month at St. Valentine's Day Massacre: In Your House, Bob Holly, now renamed Hardcore Holly,[5] defeated Snow for the WWF Hardcore Championship[10] to permanently end the J.O.B. Squad.

In 1999, Holly entered the race for the WWF's new Hardcore Championship, winning it six times in total, and billing himself as Hardcore Holly.[5][10] He teamed up with an on-screen cousin Crash Holly, with whom he won the WWF Tag Team Championship.[11] In 2000, Hardcore Holly challenged Chyna for a shot at the disputed Intercontinental Championship on Raw is War. He lost the match due to interference from Chris Jericho, and later lost a Triple Threat Match against Chyna and Jericho for the Intercontinental Championship at the 2000 Royal Rumble.[12] Holly then missed several months of ring time due to a legitimately broken arm, suffered in a match with Kurt Angle after Angle botched a Moonsault and landed on Holly's left forearm with his knee.[4] After his return, later in 2000, another on-screen cousin, Molly Holly was introduced.[5][13] 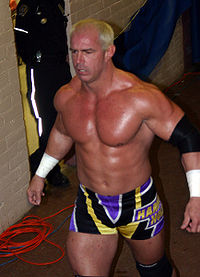 In 2002, Holly became a villain on SmackDown! and began a short feud with Randy Orton.[2] Holly suffered a broken neck during a 2002 match against Brock Lesnar, when he was powerbombed neck first on the mat, although it has been suggested that he refused to cooperate in completing the move safely and easily.[4] He had a thirteen-month hiatus from wrestling after surgery. In October 2003, Holly began training at Ohio Valley Wrestling, WWE's developmental territory, in preparation for his return to the main roster.[4] Holly returned at the Survivor Series pay-per-view in November 2003 for revenge.[14] He challenged Lesnar to a match for the WWE Championship at the Royal Rumble, but lost.[15]

During 2004 and early 2005, he formed short-lived tag teams with Billy Gunn, and later Charlie Haas in the hunt for the WWE Tag Team Championship, but was unsuccessful with both partners.[4][16][17] He also failed to claim the WWE Championship from John "Bradshaw" Layfield in a hardcore match.[18]

In mid 2005, Holly went into singles competition trying to acquire the United States Championship from Orlando Jordan.[19] After being defeated twice by Jordan, Holly finally managed to pick up a non-title win over Jordan via disqualification on WWE Velocity, which aired on August 6, 2005.[2][4] Holly then entered a short feud with SmackDown! newcomer, Mr. Kennedy. This feud climaxed on October 9, 2005 at No Mercy, where Kennedy defeated Holly after a Green Bay Plunge.[20]

Holly then underwent several surgeries to repair nagging injuries. He was hospitalized after a staph infection developed in a right arm wound.[4] The infection was possibly career-threatening, as doctors were worried at one point that the arm may have to be amputated.[21] The subsequent treatments were a success, however.[21]

Holly made a surprise appearance at WWE's ECW house show event on August 21, 2006 in Allentown, Pennsylvania, defeating Balls Mahoney.[22] Holly made his ECW television debut the next night, August 22, appearing in a promo with Paul Heyman, and later attacking Rob Van Dam (RVD) and Danny Doring during a match.[23] Holly, as a heel, soon joined with Heyman and his other associates to feud with RVD and others. 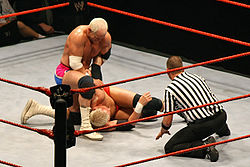 Holly with an armbar locked firmly on Mr. Kennedy.

On September 26, 2006, Holly received 24 stitches from WWE Doctor Louis Rios in his back after suffering a severe laceration during an Extreme Rules match against Rob Van Dam when he landed on the metal railing of a table he was suplexing Van Dam out of the ring and through during an ECW show in Tulsa, Oklahoma.[24] Holly obtained the injury early in the match but continued to wrestle until the match's conclusion when he was pinned. After the match, as he was being helped out of the ring, he received a standing ovation from fans.[25] The legitimate incident caused fans to cheer Holly in the following weeks, leading him to become a fan favorite character and a feud with Paul Heyman's other enforcer Test.[26] His second to latest run as a fan favorite was short lived as he eventually turned on Rob Van Dam when they were partners in a tag match.[27]

When Sabu was found kayfabe unconscious in the locker room area before the Extreme Elimination Chamber at December to Dismember, Holly was chosen as his replacement.[28] Holly entered with Rob Van Dam as the first of two combatants. He was the second to be eliminated; he was eliminated by Test by a running big boot.[28] Subsequently, he entered into a feud with CM Punk whereby Holly, now a tweener, showed his endurance by surviving Punk's Anaconda Vice submission hold.[29] Holly then gave Punk his first loss in ECW; Punk had been undefeated for half a year.[30] After Test replaced Holly in a match against ECW World Champion Bobby Lashley, Holly vowed he would become champion whether he faced Test or Lashley. Holly then was one of ECW superstars entered in the Royal Rumble, but was eliminated by The Great Khali.[31] Holly soon became the number one contender for Lashley's ECW Championship and faced off against Lashley, albeit unsuccessfully.[32]

On April 3, 2007, Holly lost to Snitsky. After the match, Snitsky wedged Holly's arm between the steel steps and repeatedly hit the steps with a steel chair, resulting in a broken arm in the storyline.[33] Holly had surgery on April 16 because of a staph infection and missed around five months.[34] 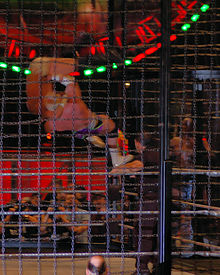 Holly performing a superplex on Test in the Extreme Elimination Chamber at the December to Dismember event.

Holly was drafted back to SmackDown! from ECW on June 17, 2007 as part of the Supplemental Draft. Despite this, he returned to the ring as a member of the Raw brand on September 24, 2007, defeating Cody Rhodes,[35] and starting a "respect" feud in which Holly defeated Rhodes on the two following episodes of Raw.[36][37] On the October 22 episode of Raw, Holly became a fan favorite by saving Rhodes from the post-match assault of Shelton Benjamin and Charlie Haas.[38] On the October 29 episode of Raw, Holly and Rhodes emerged victorious in a tag team match against Benjamin and Haas.[39] They earned a shot at the World Tag Team Championship by defeating Paul London and Brian Kendrick and The Highlanders in a WWE.com exclusive match after an Alabama Slam. Holly and Rhodes lost their title match, however, against Lance Cade and Trevor Murdoch at Survivor Series.[40]

On December 10, 2007, on the Raw 15th Anniversary episode, Holly along with Rhodes defeated Lance Cade and Trevor Murdoch for the World Tag Team Championship.[41][42][43] The following week, Holly and Rhodes retained their title, in their first title defense, against Cade and Murdoch.[44] They successfully defended their title against the teams of Carlito and Santino Marella and Paul London and Brian Kendrick.[45][46] At Night of Champions on June 29, 2008, Rhodes turned on Holly by defeating him with Ted DiBiase in a handicap match to crown the new team as champions.[47] This was his last appearance in WWE as, on January 16, 2009, Holly was released from his WWE contract, after 15 years with the company.[48]

Bob is married to his high-school sweetheart Linda Kievet-Bott, now Linda Howard, and they currently reside in East Dubuque, Illinois.[2] Howard is close friends with fellow professional wrestler Monty Sopp. Besides wrestling, Holly is also a NASCAR fan, he stated in an interview with Bill Apter in a 1Wrestling.com exclusive interview.[49]

Howard worked as a trainer for Tough Enough III, a reality television show produced by WWE and MTV where participants underwent professional wrestling training and competed for a contract with WWE. The show caused some controversy when, during the course of a practice match, Howard assaulted a competitor, Matt Cappotelli, leaving him bleeding.[50][51] Cappotelli has since said that there is no ill-feeling between the two because of the incident.[50][51]

On the 17th October 2011, Canadian website SLAM! Sports announced that an autobiography of Bob Holly, entitled The Hardcore Truth, will be released in early 2013. The book will be co-written by British author Ross Williams, who has wrestled Holly on the UK independent scene, and is to be published by ECW Press. [52] 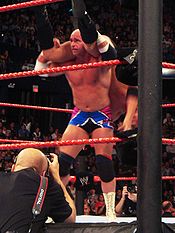 Holly prepares to hit the Alabama Slam on Cody Rhodes 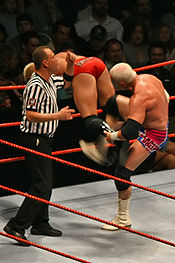 Holly performing his signature kick to the midsection of a rope hung Mr. Kennedy