Lockwood wrestled on the independent circuit and briefly for Extreme Championship Wrestling before he signed a contract with the World Wrestling Federation in 1999. He debuted as "Crash Holly", Hardcore Holly's on-screen cousin. In June 2003, he was released from WWE and joined Total Nonstop Action Wrestling as "Mad Mikey", but died in November 2003, just four months after debuting.

In WWF/E, he was a one time European Champion,[4] a one -time Light Heavyweight Champion,[5] and a twenty-two time Hardcore Champion.[6] He was also a one time World Tag Team Champion with Hardcore Holly.[7]

Lockwood made his wrestling debut in 1989, as "Johnny Pearson" in Bay Area Wrestling, where he competed until 1994.[1] He dislocated his shoulder about five times, and ended up having to take a year and a half out to recover.[2] He then competed on the independent circuit as "Irish Erin O'Grady", and in 1996, moved to All Pro Wrestling (APW), where he became known as "The Leprechaun Erin O'Grady".[2] Lockwood became especially famous for his matches with Vic Grimes.[3]

After viewing a tape of a match between O'Grady and Michael Modest, Extreme Championship Wrestling (ECW) employee Taz (Peter Senerchia) contacted Lockwood about joining ECW. This resulted in Lockwood having a brief stint there.[3] Lockwood wrestled Grimes in a try-out match for the World Wrestling Federation (WWF) on February 20, 1999, and both were signed to contracts.[2] They were sent to Power Pro Wrestling, WWF's farm territory to train, where they won the PPW Tag Team Championship together.[8] Lockwood also won the PPW Young Guns Championship.[9] The WWF talent coordinator Bruce Prichard, also sent Lockwood to Mexico, to prepare him for the style of the WWF's Spanish show.[2] He competed in Monterrey for three months, under a mask, using the alias "The Green Ghost", a play on the word "gringo".[2] 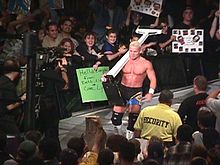 Holly carrying his weighing scale to the ring in 1999.

Lockwood debuted as Crash Holly, the on-screen cousin of Bob "Hardcore" Holly, on the August 16 episode of Raw is War in 1999.[2] The relationship between the on-screen cousins was strained, with Hardcore frequently threatening Holly.[1] He was often seen carrying a weighing scale when he took on the gimmick of claiming himself to be well over 400 lbs, along with Hardcore, so that they would be considered super heavyweights.[1] Holly, teaming with Hardcore as The Holly Cousins, made his pay-per-view debut at SummerSlam in 1999. The pair participated in a Tag Team Turmoil match, a match where when one team was eliminated, they were replaced by another, won by the Acolytes Protection Agency.[10][11] At No Mercy, they defeated the New Age Outlaws team by disqualification.[12] The next night on Raw is War, they defeated the Rock 'n' Sock Connection for the WWF Tag Team Championship.[7] They held the titles until November 4, when they dropped the titles to Mankind (Mick Foley) and his new partner Al Snow (Allen Sarven) on an episode of SmackDown!.[13]

In early 2000, Holly joined the hardcore division and went on to win the Hardcore Championship twenty-two times, with his first title win coming on the February 24, 2000, episode of SmackDown! when he defeated Test for the title.[6] Holly decreed that he must defend the championship twenty four hours a day, seven days a week ("24/7").[1] This meant that the title was permanently contested, not just in the course of sanctioned matches, and could therefore change hands anywhere, as long as a referee was present to administer the three count. Holly was frequently attacked by other wrestlers while in unlikely locations, including an airport, a funhouse, a circus, and even in his hotel room.[2] While Holly was often pinned, he normally immediately regained the title from his opponent.[6] His most common tactic was to steal a win in one of his or someone else's Hardcore Championship match and quick run away to the back, away from other contenders.[6] This turned him into a crowd favorite and earned him the nickname of the "Houdini of Hardcore".[14] During his time in the hardcore division, he had a long standing feud with the members of the Mean Street Posse, Pete Gas, Rodney, and Joey Abs.[6] Holly also became well known for defending the championships against non-wrestlers, including referees and road agents like Gerald Brisco and Pat Patterson.[1]

In late 2000, Holly's on-screen cousin Molly Holly was introduced. At Rebellion, Holly defeated William Regal to win the European Championship.[4] He, however, dropped the title back to Regal only two days later.[4] In 2001, the Holly Cousins began a feud with The Dudley Boyz.[15] In the course of this feud, Molly began a relationship with Spike Dudley, leading to internal disputes within each family, as well as a Romeo and Juliet-style feud between the six of them.[15] On March 18, 2001, on Heat, Holly defeated Dean Malenko to win the Light Heavyweight Championship. He held the title for over a month before dropping it to the debuting Jerry Lynn on the April 29 episode of Heat.[5] In May 2001, Holly and Hardcore briefly reunited but wrestled lower-card tag teams.[11] 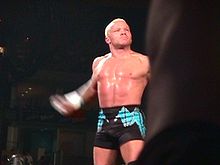 Holly making his entrance at King of the Ring 2000.

When the WWF was renamed World Wrestling Entertainment and then divided into two "brands", the two storyline divisions to which WWE assigned its employees, Holly was initially drafted to the Raw roster, where he had little success.[16] He later jumped ship to SmackDown! in the midst of a match with Jeff Hardy on the September 2, 2002 episode of Raw, shortly after Eric Bischoff, having been informed that a Raw wrestler would leave Raw to reunite with a relative on SmackDown! that night, ordered a beatdown on Hardy (who he thought was leaving Raw to be with his brother Matt Hardy).[17]

His first SmackDown! match took place on September 5, where he defeated The Hurricane.[18] He started a feud with Cruiserweight Champion Jamie Noble over the Cruiserweight Championship.[3] On October 3, on an episode of SmackDown!, Noble defeated Holly to retain the title.[19] On December 19, Holly teamed up with Bill DeMott to take on Noble and Nunzio (James Maritato).[20] Crash and DeMott won the match but after the match, DeMott turned on Holly and attacked him.[20] This led to a match on the following week on SmackDown!, where Holly was defeated.[21]

After being sidelined for four months, Holly made his return on April 24, 2003 episode of SmackDown!.[22] After he returned, he joined Matt Hardy and Shannon Moore as part of the "Mattitude Followers" faction (as Moore's supposed apprentice, Crash was also referred to by Hardy as a "Moore-on.")[22] but failed to recreate his earlier success and was released by WWE on July 12, 2003.[1][3]

Lockwood signed a contract with Total Nonstop Action Wrestling (TNA) in July 2003 and made his TNA debut on July 23 as Mad Mikey.[23] Elix Skipper offered an Open Challenge to any wrestler which Mikey accepted; however, he lost in his debut match for the company.[23] In late 2003, Mikey and Rory Fox defeated Quiten Lee and The Human Time Bomb, in what was his last professional wrestling match before his death.[3] He also briefly wrestled for Pro Wrestling Iron in Hayward, California.[3]

Lockwood was born in Anaheim, California, but was raised in Pacifica, California, where he graduated from Terra Nova High School.[1] Lockwood became interested in professional wrestling when he was in the eighth grade, and was inspired by Brady Boone.[2] While training as a wrestler and working on the independent circuit, he worked at Safeway to support himself.[2]

Lockwood met his wife, N'keigh Wheeler, when she escorted Mark Henry to the ring at Unforgiven 1999, in Charlotte, North Carolina.[24] They were married on New Year's Eve, 1999.[24] He opened "Crash Holly's School of Professional Wrestling" in Salisbury, North Carolina, the town where his wife grew up, in 2002.[1][24]

Lockwood died at the age of 32 on November 6, 2003, while at the home of wrestler Stevie Richards in Florida.[1] He was found partially clothed with a pool of vomit around his face.[25] Empty prescription medication bottles and a partly consumed bottle of alcohol were found nearby, and he had recently received divorce papers from his wife.[25] The cause of death was first ruled as choking on his own vomit, but it was later officially ruled a suicide.[25][26] He was buried in China Grove in Rowan County, North Carolina.[27]

In August 2005, Nora Greenwald (Molly Holly) released an autobiographical DVD entitled "Nora Greenwald: Shootin' the Shit Crap", and a portion of the profits from the sale of the DVD went to Lockwood's daughter's education fund.[28] In March 2005, the New Breed Wrestling Association held the "Mike Lockwood Memorial Tournament", which was won by Michael Modest.[29] At ECW One Night Stand in 2005, Lockwood was one of the wrestlers who was honored in the video package of deceased former ECW wrestlers.[30] 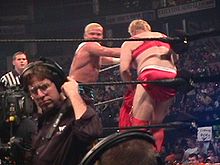 Holly attacking Pat Patterson during Patterson's Evening Gown match with Gerald Brisco at the 2000 King of the Ring pay-per-view.