While under contract with WWF/WWE, Martin enjoyed success as a singles competitor, becoming an Intercontinental Champion, European Champion and Hardcore Champion. Martin was also successful in the Tag team division, becoming a WWF and WCW Tag Team Champion with Booker T.

In the mid 1990s, Martin met professional wrestler Bret Hart in a restaurant. After Hart offered to train him to wrestle, Martin spent eight months training under the teachings of Bret and Leo Burke. Martin debuted in 1997, wrestling on the Canadian independent circuit under the ring name "Martin Kane" and "T.J. Thunder". Martin continued his training with Dory Funk, Jr. at Funk's Funkin' Dojo, a training center.[1]

Martin debuted in the World Wrestling Federation on the October 25, 1998 episode of Sunday Night Heat as an unnamed bodyguard for the band Mötley Crüe, who was performing on the show. In a scripted event, Martin threw an overzealous fan off the stage during the band's rehearsal.[5] On the December 14, 1998 episode of Raw is War, Martin aligned himself with WWF Champion The Rock by attacking The Rock's rival Triple H.[1] Martin went on to join The Corporation, a wrestling stable consisting of numerous other wrestlers. During this time, he received the ring name "Test".[5]

Relationship with Stephanie McMahon and T & A

After being removed from the Corporation, Martin joined The Union, the group briefly feuding with the Corporation before quietly disbanding.[5] They were known for carrying 2" by 4" pieces of lumber to the ring with them. 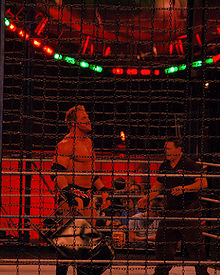 Test at December to Dismember.

Martin then began an on-screen relationship with Stephanie McMahon after he defeated Shane McMahon in a match, at SummerSlam in 1999, which led to an on-screen engagement between Stephanie and Martin.[5] Later in the storyline, The British Bulldog hit Stephanie with a trash can, which caused her to develop amnesia. Plans for the wedding continued however, until Triple H showed a video which revealed that he had given Stephanie drugs and taken her to Las Vegas, Nevada, where they were married in a drive-through ceremony. Stephanie turned on Test and aligned with Triple H, ushering in the McMahon-Helmsley Era.[5] Test would soon turn into a villain and form a tag team with Albert. The two were known as T & A, Test and Albert, and were managed on-screen by Trish Stratus.

T & A disbanded in early 2001 when Albert turned on Test at the orders of Stephanie McMahon-Helmsley.[5]

Again a single wrestler, Test eliminated William Regal during the 2001 Royal Rumble match and subsequently defeated him the next night on Raw is War to win the WWF European Championship.[5] Test then feuded with Eddie Guerrero, losing the championship to him at WrestleMania X-Seven following interference from Dean Malenko and Perry Saturn.[5] On the August 9, 2001 edition of SmackDown, Test joined The Alliance by helping Alliance members Diamond Dallas Page and Chris Kanyon defeat the APA for the WWF Tag Team Titles, in retaliation for being attacked by the APA a few weeks ago when they thought Test was the Mole helping WCW invade the WWF. Bradshaw and Faarooq were suspicious of Test's friendship with Shane McMahon, prior to Shane's heel turn and the formation of the ECW half of the Alliance.[5] Teaming with the Dudley Boyz, Test went on to pin Bradshaw at SummerSlam to defeat the APA and Spike Dudley in a 6-man tag team match.

Test began teaming with Booker T regularly in September 2001. Together they defeated The Undertaker and Kane on the September 27, 2001 edition of SmackDown to win the WCW Tag Team Titles, however they lost the titles to the Hardy Boyz on the October 8, 2001 edition of Raw. Test and Booker T also defeated The Rock and Chris Jericho on the November 1, 2001 episode of SmackDown to win the WWF Tag Team Championship, which they also lost to the Hardy Boyz on the Raw, November 12, 2001.

Martin then feuded with Edge, losing to him at Survivor Series in 2001 in a match in which the WCW United States Championship and the WWF Intercontinental Championship (which he had taken from Edge two weeks prior on Raw) were unified.[5] On the same night, he won a battle royal which granted him on-screen immunity from being fired for a year after attacking and taking the place of Scotty 2 Hotty.

In 2002, Test lost in the semi-finals of the King of the Ring tournament to the eventual winner, Brock Lesnar. Test later formed a stable, "The Un-Americans" along with Lance Storm, Christian, and William Regal, culminating in a match at Summerslam where The Undertaker defeated Martin.[5]

In October 2002, Stacy Keibler became Test's on-screen girlfriend and "image consultant". She instructed him to cut his hair and switch his customary leather trousers for short tights. Stacy dubbed Test's fans the "Testicles", in line with The Rock's fan group, the "People", Kane's "Kaneanites", and Hulk Hogan's "Hulkamaniacs", becoming a face soon after.[5] Test formed a tag team with the returning Scott Steiner, and began to mistreat Stacy after he became suspicious of her relationship with Steiner, which turned him heel again. The partners split and began vying for Stacy's managerial services. Test eventually defeated Steiner, winning the services of Stacy and announcing his intentions to "make her their whore". Test defeated Steiner again, forcing him to become Test's manservant.[5] Steiner then attacked Stacy, blaming her for having to take orders from another man. Test freed Steiner from his obligation, and the pair became a tag team once again and treated Keibler like a slave. The two challenged for the World Tag Team Championship on more than one occasion, but came up short each time. The pair was fired by Mick Foley, who was the on-screen guest General Manager for two nights, but were re-hired by Raw General Manager, Eric Bischoff upon his return to the position. The angle involving Steiner and Keibler was eventually dropped, and Test began to feud with Steven Richards, which started after Test kicked Victoria (Richard's on-screen girlfriend) in the jaw. They fought several times on Sunday Night Heat with Richards winning every match.

Martin underwent spinal fusion surgery in July 2004 under Dr. Lloyd Youngblood. On November 1, 2004, he was released from his WWE contract along with A-Train and Billy Gunn.[6]

Test returned to the ring in May 2005, and began accepting bookings with various independent promotions. One of his most notable victories during this tenure was against TNA wrestler Samoa Joe. His most prominent role in the independent circuit was in Kishi's Nu-Wrestling Evolution promotion in Italy, where he took on the ring name "Big Foot", due to his "big boot" finishing move. 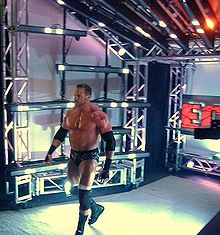 Test making his entrance on ECW.

On March 22, 2006, WWE announced that Test had verbally agreed to return to WWE; he would begin competing in dark matches before Raw and SmackDown!.[5] Subsequently, vignettes began to play during ECW on Sci Fi, announcing that Test was going to debut on the ECW brand of WWE. He made his debut on the July 4, 2006 episode of ECW, defeating Al Snow.[5][7] Test portrayed a vicious villain, as opposed to the arrogant villain he played in the past. This led to Test receiving a fairly large push which resulted in Test being victorious in singles matches for the entirety of 2006 in during the ECW program. Test's first real angle in ECW placed him as part of a feud between new and old ECW stars, first teaming up with Mike Knox, and enveloping other newcomers, Big Show and Matt Striker, against the stable, "ECW Originals", which consisted of Rob Van Dam, Sabu, and The Sandman.[5]

On November 7, Test defeated Tommy Dreamer to earn a spot in the Extreme Elimination Chamber at December to Dismember for the ECW World Championship. During the match, he eliminated Hardcore Holly and Van Dam before being pinned by the eventual winner Bobby Lashley.[5] He would fail to defeat Lashley in three consecutive matches, as well as a title match at the 2007 Royal Rumble and a title rematch on the January 30 episode of ECW.[5]

After he seemingly disappeared from WWE television, Raw commentator Jim Ross confirmed that Test had been suspended for 30 days for violating the WWE "Wellness Program".[8] A week after Ross made the announcement, however, Test was released from his WWE contract.[9][10] Martin released a statement through his MySpace saying that the release was mutual and he had requested it.[11]

Martin, identified as "'The new Enforcer in TNA, 'The Punisher' Andrew Martin", debuted in Total Nonstop Action Wrestling (TNA) during the August 2, 2007 episode of TNA Impact! as a babyface. Martin aligned himself with Abyss and Sting by helping them defeat A.J. Styles and Christian Cage in a tag team ladder match.[4][12] At Hard Justice 2007, Martin, Abyss, and Sting defeated A.J. Styles, Christian Cage, and Tomko, a stable known as Christian's Coalition, in a Doomsday Chamber of Blood match after Styles was slammed into a pile of broken glass and pinned by Abyss. Martin was released from TNA shortly afterward due to concerns over his physical size, and TNA being investigated by the United States Congress.[13]

On December 19, 2007, Martin announced his retirement from professional wrestling.[14] Martin stated that he would do one final tour of Ireland in March 2008 and then retire permanently. He mentioned that he did not want to be a wrestler who, "despite talk of retirement, persistently returns".[15]

Martin had a distinctive cross tattoo emblem with a moon & sun on his left shoulder to show his families Irish heritage.

Martin was found dead in his Tampa, Florida home on March 13, 2009.[3][14] Police were called in after a concerned neighbor reported Martin appearing motionless for several hours through a window outside of his condominium. Police retrieved the body after scaling the apartment balcony. He is believed to have died the previous day.[20][21] His death was ruled an accidental overdose of oxycodone.[22] It was later determined by forensic pathologist Dr. Bennet Omalu that Martin had severe chronic traumatic encephalopathy, an Alzheimer's-like form of brain damage that fellow pro wrestler Chris Benoit was found to be suffering from shortly before his death in 2007, caused by repeated concussions and subconcussive head injuries. He was cremated & his cremated remains were flown to his family at his hometown of Whitby, Ontario, Canada at an unknown location.[23]