Christopher Eric "Chris" Harris (born December 25, 1973) is an American professional wrestler. He is best known for working for Total Nonstop Action Wrestling, where he was formerly one-half of the tag team America's Most Wanted along with partner & Former TNA World Heavyweight Champion James Storm.

Along with several other wrestlers, including future tag team partner James Storm, Harris was signed to a World Championship Wrestling (WCW) developmental deal in October 2000. Terry Taylor proposed a country singer gimmick for him, but it was rejected by management. He appeared as a fake version of Sting at Halloween Havoc in 2000.[2] He wrestled on the WCW B-shows WorldWide and Saturday Night as part of R and B Security (the "Ribs and Bacon" team) until the promotion was sold in early 2001.

On June 1, 2002, Harris was given a tryout match against his long-time independent circuit rival James Storm with Total Nonstop Action Wrestling (TNA) by Bert Prentice.[1] Both were subsequently signed to short term contracts. He wrestled in the Gauntlet for the Gold match on the first TNA pay-per-view and was placed in a tag team with Storm on the second pay-per-view by Bob Ryder, the creative force behind the team. Storm came up with the name "America's Most Wanted" (AMW) for the team. They obtained their first success on September 18, 2002 by surviving a tag team Gauntlet for the Gold and defeating Ron Harris and Brian Lee to obtain the NWA World Tag Team Championship.[1]

In March and April 2003 the duo teased a split, with Storm and Harris facing off in a singles match on May 7, 2003. Storm won the match, but the partners shook hands afterward. Harris rejected Vince Russo's offer to join his stable of degenerates, Sports Entertainment Xtreme (S.E.X). When Storm was incapacitated by the recurrence of an old shoulder injury in early 2004, Harris received a NWA World Championship shot on March 17, 2004 and was defeated by champion Jeff Jarrett. He went on to compete in a "King of the Mountain" ladder match for the title on June 2, 2004, but was again bested by Jarrett. 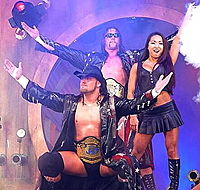 America's Most Wanted resumed teaming together, but on August 25, 2004, James Storm was sidelined with neck and shoulder injuries, leaving Harris without a partner. Harris teamed with Elix Skipper to win an NWA Tag Team Title for a fifth time on September 8, 2004.[3] Harris and Storm later reunited. On January 16, 2005 Harris became a six time NWA Tag Team Champion (along with James Storm), winning the Tag Title from Bobby Roode and Eric Young. Harris won the title for a sixth and seventh time as part of AMW. In league with Jeff Jarrett, he would semi-reprise his role as a fake Sting when he played the Crow Sting in a Planet Jarrett retrospective of Sting's career on Impact! on January 7, 2006.

America's Most Wanted split as a team on the December 14, 2006 edition of Impact! during a tag team match with LAX in a Titles vs Team match. Storm effectively chose the outcome of the match by assaulting Harris with a beer bottle allowing him to be pinned by Homicide putting an end to AMW. 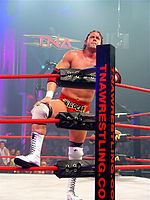 On the January 11, 2007 episode of Impact! Harris did a (kayfabe) sit-down interview with Mike Tenay giving a strong impression his wrestling career could be over. Harris was not seen on television until the Against All Odds pay-per-view in which he (wearing an eye patch) went for Storm. For several weeks, he continued to attack Storm. On the March 1, 2007 episode of Impact! Harris claimed his vision was at 30% and vowed revenge on Storm. At Lockdown, Harris lost to Storm in Six Sides of Steel match, in which both men were blindfolded. It was revealed his vision had been restored, and Harris faced off against Storm at Sacrifice, in a Texas Death match, where Harris came out the victor. After this, Harris showed up two weeks straight to assist Rhino and Hector Guerrero with The Latin American Xchange (LAX). Harris entered into Slammiversary as the last contestant in the King of the Mountain Match, only to lose to Kurt Angle. Harris feuded with Christian Cage, losing to him by roll-up at Victory Road after Dustin Rhodes hit him in the back.

The Harris/Rhodes feud continued for a few weeks with Rhodes attacking Harris during his matches on Impact! until a match was made at Hard Justice, when Harris defeated "Black Reign" Dustin Rhodes via disqualification and at No Surrender Harris defeated Black Reign in a No Disqualification match by pinning Reign. On January 11, 2008, TNA announced on its website that Harris had been released from his TNA contract.

Harris announced on his official website that he had signed a contract with World Wrestling Entertainment (WWE) on January 29, 2008.[4] Harris was pinned by Shelton Benjamin in his WWE debut on March 11, 2008 in a dark match. A bloated Harris made his WWE television debut on the July 8, 2008 episode of ECW, under the name "Braden Walker", defeating Armando Estrada.[5] It was during this feud that the famous catchphrase "I'm Braden Walker and I'm going to knock your brains out" was coined, following a knock-knock joke he had told Estrada. He wrestled one more match, a pinfall victory over James Curtis, before he was released from his WWE contract on August 7, 2008.[6]

In early September 2008, Harris appeared at the Northern Wrestling Federation under the name "Wildcat" Chris Harris.[7] He spoke of leaving professional wrestling, but changed his mind and said that he would face the NWF Heavyweight Champion Ryan Stone. On March 28, 2009, Harris wrestled a match for ROH's former sister promotion FIP, losing to Chris Hero.[8] On June 14, 2010, Harris made a one-night return to TNA at the tapings of the June 24 edition of Impact!, once again portraying a fake Sting character.[9]

Harris made yet another return to TNA as a member of the heel group Immortal at the May 12, 2011, tapings edition of Impact!, when he was introduced by Matt Hardy as his partner in their TNA World Tag Team Championship match against Beer Money, Inc. (James Storm and Robert Roode).[10][11] Harris made his in-ring return on May 6 at a house show in Fort Smith, Arkansas, teaming with Matt Hardy against Beer Money, Inc. in a losing effort.[12] On May 15 at Sacrifice, Harris and Hardy failed in their attempt to win the TNA World Tag Team Championship from Beer Money, Inc., when Storm pinned Harris after a Death Sentence.[13] After the event it was reported that TNA had chosen not to use Harris again.[14]

That same year, he appeared in the video for the Clay Davidson song "I Can’t Lie to Me".[16] 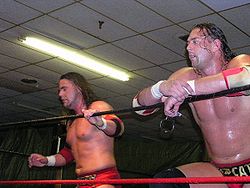 Harris and James Storm at a house show