Cossidae, the cossid millers or carpenter millers, make up a family of mostly large miller moths. Ths family contains over 110 genera with almost 700 known species, and many more species await description. Carpenter millers are nocturnal Lepidoptera found worldwide, except the Southeast Asian subfamily Ratardinae which is mostly active during the day. 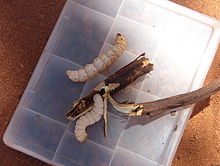 This family includes many species with large caterpillars and moths with a wingspan from 9–24 cm (6¾ in). These moths are mostly grey in color; some have long narrow wings and resemble hawkmoths (Sphingidae) which are more advanced Macrolepidoptera however. Many are twig, bark or leaf mimics, and Cossidae often have some sort of large marking at the tip of the forewing uppersides, conspicuous in flight but resembling a broken-off twig when the animals are resting. Most cossid caterpillars are tree borers, in some species taking up to three years to mature. The caterpillars pupate within their tunnels; they often have an unpleasant smell, hence another colloquial name is goat moths.

The family includes the Carpenterworm (Prionoxystus robiniae) and the Goat Moth (Cossus cossus) which have gained notoriety as pests. On the other hand, the large caterpillars of species that do not smell badly are often edible. Witchetty grubs – among the Outback's most famous bush tucker – are most commonly the caterpillars of Endoxyla leucomochla, one of the more than 80 cossid species in Australia. In Chile, the sweet-smelling caterpillars of the Chilean Moth (Chilecomadia moorei) are harvested in quantity and internationally traded as butterworms, for use as pet food and fishing bait.

Some other families, such as Dudgeoneidae, Metarbelidae and Ratardidae, have been included within this one time and again. The first is considered a distinct family of the Cossoidea today recognizable by their abdominal tympanal organs which the Cossidae lack, whereas the other two are usually kept in the Cossidae as subfamilies. Some unrelated millers were included in the Cossidae in error too, such as the genus Holcoceroides which are more primitive Ditrysia, or the Andesianidae which are even more ancient Heteroneura.

The Cossidae are today usually divided into six subfamilies, but numerous genera still await placement. The subfamilies, with selected genera and some notable species, are:[1] 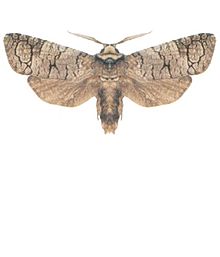 Zyganisus caliginosus belongs to an Australian genus of unclear affiliations