Arctiidae is a large and diverse family of moths with around 11,000 species found all over the world, including 6,000 neotropical species.[1] This family includes the groups commonly known as tiger moths (or tigers), which usually have bright colours, footmen (which are usually much drabber), lichen moths and wasp moths. Many species have 'hairy' caterpillars which are popularly known as woolly bears or woolly worms. The scientific name refers to this (Gk. αρκτος = a bear). Caterpillars may also go by the name 'tussock moths' (more usually this refers to Lymantriidae, however).

Many species retain distasteful or poisonous chemicals acquired from their host plants.[5] Some species also have the ability to make their own defenses (Nishida, 2002). Common defenses include: cardiac glycosides (or cardenolides), pyrrolizidine alkaloids, pyrazines and histamines.[5] Larvae usually acquire these chemicals, and may retain them in the adult stage. But adults can acquire them too, by regurgitating on decomposing plants containing the compounds, and sucking up the fluid.[5] Adults can transfer the defenses to their eggs, and males sometimes transfer them to females to help with defense of the eggs. Larval 'hairs' may be stinging, due to histamines the caterpillar makes, in some species but not all.

The insects advertise these defenses with aposematic bright coloration, unusual postures, odours, or, in adults, ultrasonic vibrations. Some mimic moths that are poisonous, or wasps that sting.[6] The ultrasound signals help nocturnal predators to learn to avoid the moths,[7][8] and can interfere with bats' ability to precisely locate flying moths (Ratcliffe and Fullard, 2005). 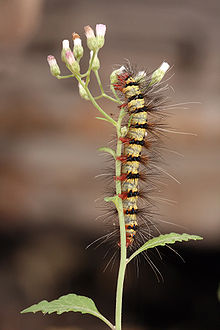 Many of the caterpillars and adults are active during the daytime. If disturbed, woolly bear caterpillars will roll into a tight spiral. Isabella tiger moths (Pyrrharctia isabella) overwinter in the caterpillar stage. They can survive freezing at moderate subzero temperatures by producing a cryo-protectant chemical.[9] The larvae of another species, Phragmatobia fuliginosa may be found on snow seeking a place to pupate.

Although abundant, few species in this family are of economic importance. Even the fall webworm, an abundant and highly polyphagous tree-feeding species that has spread from North America to Asia and Europe, does not do lasting damage to healthy hosts.

Local folklore of the American Northeast holds that "woolly bears" have the ability to predict the weather, similar to that of the Groundhog. The forthcoming severity of a winter may be indicated by the amount of black on the Isabella tiger moth's caterpillar, the most familiar woolly bear in North America; more brown than black means a fair winter, but more black than brown means a harsh winter.[10] However, the relative width of the black band varies among instars, not according to weather.[11] The mythical qualities attributed to woolly bears in the American Northeast have led to such things as the Woollybear Festival.