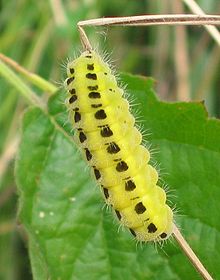 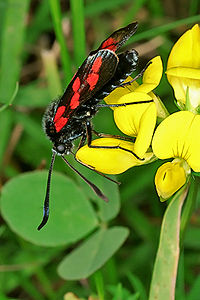 The Zygaenidae moths are a family of Lepidoptera. The majority of zygaenids are tropical, but they are nevertheless quite well represented in temperate regions. There are about 1000 species. Various species are commonly known as Burnet or Forester moths, often qualified by the number of spots, although other families also have 'foresters'. They are also sometimes called Smoky moths.

All 43 species of Australian zygaenids are commonly known as foresters and belong to the tribe Artonini of the subfamily Procridinae. The only non-endemic species in Australia is Palmartona catoxantha, a Southeast Asian pest species which is believed to be already present in Australia or likely to arrive soon[1]

Zygaenid moths are typically day-flying with a slow fluttering flight, and with rather clubbed antennae. They generally have a metallic sheen and often prominent spots of red or yellow. The bright colours are a warning to predators that the moths are distasteful - they contain hydrogen cyanide (HCN) throughout all stages of their life-cycle. Unlike most insects with such toxins, they obtain glucosides from feeding on Birds-foot Trefoil (Lotus) so that they, themselves can use HCN as a defense.[2] However, they are capable of making HCN themselves, and when in an environment poor in cyanide-producing plants, synthesize it themselves, [1]. They are known to have mimicry complexes based on these toxins.[3]

Larvae are stout and may be flattened. A fleshy extension of the thorax covers the head. Most feed on herbaceous plants, but there are some tree-feeders. Larvae in two subfamilies, Chalcosiinae and Zygaeninae, have cavities in which they store the cyanide, and can excrete it as defensive droplets.[4]

10 Species are found in the UK: