The Sims 2 is a strategic life simulation computer game developed by Maxis and published by Electronic Arts. It is the sequel to the best-selling computer game, The Sims, which debuted on February 4, 2000.[2] It was first released on September 14, 2004 for Microsoft Windows. A port to Apple Mac OS X was released on June 13, 2005. Eight expansion packs and nine stuff packs were subsequently released. In addition several console versions have been released. Though not commonly known, The Sims 2 is offered on mobile platforms. Mobile manufacturers such as Nokia offer The Sims 2 from the Ovi Store. A sequel, The Sims 3, was released in June 2009.[3][4]

The Sims 2 has the same concept as its predecessor and sequel, The Sims 3, players control their Sims in various activities and form relationships in a manner similar to real life. The Sims 2, like its predecessor, The Sims, does not have a defined final goal; gameplay is open-ended. Sims have life goals, wants and fears, the fulfillment of which can produce both positive or negative outcomes. All Sims age, and can live to 90 sim days depending on the degree to which their aspirations are fulfilled. The Sims 2 builds on its predecessor by allowing Sims to age through six stages of life and incorporating a 3D graphics engine. Although gameplay is not linear, storylines exist in the game's pre-built neighborhoods. Pleasantview is based 25 years after the town in the original The Sims. Strangetown's storyline is based on the supernatural, and is loosely connected with Pleasantview. Veronaville's characters are based on Shakespearian characters.

The Sims 2 was an instant success, selling a then-record one million copies in its first ten days.[5] As of June 2009, The Sims 2 has sold more than 14 million units worldwide and was the best-selling PC game of 2004.[6] During April 2008, The Sims 2 website announced that 100 million copies of The Sims series had been sold.[7] In addition to its commercial success, The Sims 2 was well received by critics gaining a 90% score from aggregators Metacritic and GameRankings.[8][9]

From the neighborhood view, the player selects one lot to play, as in The Sims. There are both residential and community lots, but Sims can only live in residential lots. Community lots are where Sims travel to in order to purchase things like clothing and magazines, and to interact with NPCs.

The player can choose between playing a pre-made inhabited lot, moving a household into a built-up lot, or constructing a building on an empty lot. One novelty from The Sims 1 is foundations.

The player switches among the "live" mode (default) to control Sims, the "buy" mode to add, move or delete furniture, or the "build" mode to rebuild the house. Buy and build mode for community lots is locked when player Sims visit the lot but are available from the neighborhood view. It is also possible to import neighborhood terrains from SimCity 4.

The game contains some time-bound social challenges that provide a reward if successful. Sims can throw parties to gain aspiration points or invite the headmaster over for dinner in order to enroll their children in private school. Some expansion packs have new mini-games, like running a Greek house in University or dating in Nightlife. In Nightlife, each day is a challenge to keep both Sims as happy as possible while accumulating aspiration points. Various other expansion packs introduce supernatural characters which Sims can be turned into. This includes Vampires, Werewolves, Plantsims, Zombies, and Witches.

Comparison to The Sims

Graphically, The Sims 2 is more detailed than The Sims and lets players to view its world in full 3D. This is a change from earlier Sim games, such as SimCity 2000, which used dimetric projection and fixed resolutions, as the camera was in The Sims. In The Sims, Sims are 3D meshes, but The Sims 2 introduces far more detail in mesh quality, texture quality, and animation capability. A Sim's facial features are customizable and unique, and Sims can smile, frown, and blink. The player can adjust a Sim's features in the in-game Create-a-Sim tool; for example, noses can be made to be very large or very small. Texturing is achieved through use of raster images, though it appears more lifelike.

The Sims 2 characters pass through six life stages - babies, toddlers, children, teenagers, young adults (only with University), adults, and elders - with eventual death of old age, while babies in The Sims only become children before ceasing to continue aging. The aspiration system (described above) is also new to The Sims 2. Sims can become pregnant and produce babies that take on genetic characteristics of their parents, such as eye color, hair color, facial structure, and personality traits. Genetics play a major role in the game, and as such, dominant and recessive genes play a larger role than they did in the original game. A player can also aspire to have a Sim abducted by aliens. Males then have the chance to become impregnated and produce after three Sim days a half-alien child.

Some of the other additions to gameplay are career rewards, a week cycle, the cleaning skill (which was a hidden skill in The Sims), a variety of meals (depending on time of day), exercise clothing, body shape affected by diet and exercise, and houses built on foundations. 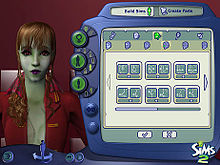 The Sims 2 Bodyshop allows more customization of facial features than the Create-A-Sim feature within the game itself.

EA Games announced on May 5, 2003 that the Maxis studio had begun development on The Sims 2.[10] The game was first shown at E3 in Los Angeles, California on May 13, 2004.[10] Will Wright admits that while most of the content of The Sims 2 are original ideas, inspiration for its own expansions and constituents spawned from the successes of the first game. The community interest in the antecedent The Sims: Unleashed and The Sims: Hot Date expansions ensured the creation of The Sims 2: Pets and The Sims 2: Nightlife expansions, respectively.[11]

After development concluded, designers from Maxis regarded The Sims 2 as very capricious during creation. Bugs would appear, and Sims would be "tweaked", or have anomalies not present in a previous run.[12] A teaser trailer was provided on the Makin' Magic CD but was later uploaded to websites all over the Internet.

The Sims creator, Will Wright was recognized by being nominated at the Billboard Digital Entertainment Awards for Visionary and Game Developer.[28] The game was also nominated for two international awards in 2005.[29][30]

The Sims 2 malleable content and open-ended customization have led to controversy on the subject of pay sites and sexual modifications. Custom content is distributed through independent websites, some of which charge for downloading materials. It has been alleged that this is a breach of the game's EULA,[31] which prohibits the commercial use of Electronic Art's intellectual property.

On July 22, 2005, former Florida attorney Jack Thompson alleged that Electronic Arts and The Sims 2 promoted nudity through the use of a mod or a cheat code. The claim was made that pubic hair, labia and other genital details were visible once the "blur" (the pixelation that occurs when a Sim is using the toilet or is naked in the game) was removed.[32] Electronic Arts executive Jeff Brown said in an interview with GameSpot:[33]

This is nonsense. We've reviewed 100 percent of the content. There is no content inappropriate for a teen audience. Players never see a nude Sim. If someone with an extreme amount of expertise and time were to remove the pixels, they would see that the sims have no genitals. They appear like Ken and Barbie.

Prior to Thompson's statement, there was an enterable code which removed pixelation accessible from the console menu. Shortly after the statement, subsequent patches and expansion packs removed the "intProp censorGridSize" code; this code was leftover from the beta testing stage of the original game and was not intended for a public audience.

The Sims live action[34] film is currently in preproduction under an eponymous working title.

On May 25, 2007, it was announced that The Sims film rights had been purchased by 20th Century Fox.[35] Not much is known yet about the upcoming film, although a rumored story involving the characters finding a way to control others through a "Sims"-like game has been reported on several movie sites. It will be written by Brian Lynch, co-writer of the Angel: After The Fall comics and writer/director of the 1999 film Big Helium Dog. The film will be produced by John Davis, responsible for films such as I, Robot and Predator.[36]

EA has officially announced[37] it and a MySims animated television series in development at Film Roman.

Many Sims games have been ported to Mac OS X by Aspyr. The Sims 2 has also been released for a number of video game consoles including the PlayStation 2, the Xbox, Nintendo DS and the Gamecube.

Compilations of expansion packs and stuff packs without the core game have also been released.

Stuff packs are add-ons that intend to add only new items (usually in the amount of 60) to the base game. However, some releases include certain gameplay elements introduced in previous expansion packs. There are nine stuff packs so far. The Sims 2: Holiday Party Pack served as the pilot release for this line of products, which were called "booster packs". After the success of the pilot release, EA named the releases "stuff packs" and launched the line with The Sims 2: Family Fun Stuff. The Sims 2: Mansion & Garden Stuff is the final stuff pack for The Sims 2.

Most of expansion packs and stuff packs were released with pre-order items. This game content was redeemable at the official site using a code supplied by the retailer from which the player purchased, each retailer was often associated with an exclusive download. A total of 60 pre-order items were released.

The Sims 2 Store was an online store where players of The Sims 2 for PC could purchase and download content for their game online for additional fees. It offered objects, clothing, skins, and hairstyles that are both exclusive to the store and also come from earlier expansion and stuff packs.

It also had featured seven exclusive item collections that could only be found in the store. The store used a point system that players can purchase. It was opened from July 2008 to March 31, 2011 as a beta version limited to the United States and Canada. To download, players must install The Sims 2 Store Edition and the EA Download Manager. The exclusive collections were "Cubic", "Art Deco", "Spooky", "Castle", "Asian Fusion", "Art Nouveaulicious" and "Oh Baby", including a total of 471 items.

SimPE is an open-source utility for The Sims 2 that allows editing of Sims' characteristics, relationships and careers. It also allows the creation of objects. The SimPE interface is not considered intuitive[46] and users risk corrupting the game files.[47] TS2 Enhancer, developed by Rick Halle, is a commercial utility for editing characters and neighborhoods, but has since fallen into disuse.[48]