Not to be confused with Gillingham, Dorset

i/ˈdʒɪlɪŋəm/ is a town in the unitary authority of Medway in South East England. It is part of the ceremonial county of Kent. The town includes the settlements of Brompton, Hempstead, Rainham, Rainham Mark and Twydall.

Gillingham means a homestead of Gylla's family, from Old English ham (village, homestead) and ingas (family, followers), and was first recorded in 10th century as Gyllingeham.

Also referred to in old texts as Jillyingham Water, hence the pronunciation being Gillingham (the G sounds as a "J" as in the girls' name Jill).

Gillingham became an urban district under the Local Government Act 1894, gaining municipal borough status in 1903. John Robert Featherby was the first mayor of the Borough of Gillingham. In 1928 Rainham was added to the Gillingham Borough. Under the Local Government Act 1972 it became a non-metropolitan district. It merged with the other Medway towns (in the City of Rochester-upon-Medway district) in 1998 under the 1990s UK local government reform, to become part of the Medway unitary authority.

The town grew along the road from Brompton on the great lines (military barracks), to the railway station. As such it was a linear development. Close by was the road along the shore line, linking The Strand, and the tiny village of Gillingham Green. Later, communiites developed along the top road- Watling street – turnpike linking Chatham with Dover. All these communities merged into the town that is called today Gillingham.

The name Gillingham is recorded already in the Domesday book of 1086. It is said that it was named after a war lord, Gyllingas—from the old English "gyllan" meaning "to shout". He was a notable man in Kent history as he led his warriors into battle screaming and shouting. At the time of the Norman Conquest, Gillingham was a small hamlet; It was given to his half-brother, Odo, Bishop of Bayeux which rebuilt the Parish Church at Gillingham and constructed an Archbishop’s Palace on land bordered by Grange Road, the ruins of which could still be seen last century. Gillingham itself, at the time was small hamlet, centred around the Parish Church and surrounded by large farm-holdings, of which St. Mark’s Parish formed part, being part of Brittain Farm.

William Adams (sailor) mentioned Gillingham in his writings, saying: "... two English miles from Rochester and one mile from Chatham, where the King's ships do lie". A record of his baptism that was taken place at Gillingham Parish Church on 24 September 1564 is held in the church and can be viewed on request.[2]

The River Medway estuary at The Strand, Gillingham. The Kingsnorth power stations are on the opposite bank.

In medieval times the part of Gillingham known as Grange was a limb of the Cinque Ports, and the maritime importance of the area continued until the late 1940s. Indeed, a large part of Chatham Dockyard lay within Gillingham: the dockyard started in Gillingham and, until the day it was closed in 1984, two thirds of the then modern-day dockyard lay within the boundaries of Gillingham. The dockyard was founded by Queen Elizabeth I on the site of the present gun wharf, the establishment being transferred to the present site about 1622. In 1667 a Dutch fleet sailed up the River Medway and having landed at Queenborough on the Isle of Sheppey, and laying siege to the fort at Sheerness, invaded Gillingham in what became known as the raid on the Medway. The Dutch eventually retreated, but the incident caused great humiliation to the Royal Navy.

The Seven Years' War began in 1756. The government immediately gave orders for the defence of the dockyard, and by 1758 the Chatham Lines of Defence were built. Over a mile long, they stretched across the neck of the dockyard peninsula, from Chatham Reach, south of the dockyard, across to Gillingham Reach on the opposite side. One of the Redoubts on the Lines was at Amherst. The batteries faced away from the dockyard itself to forestall an attack from the landward side; the ships and shore-mounted guns on the river were considered sufficient to protect from that side. The lines of defence are now part of the Great Lines Heritage Park and also the Lower Lines Park (near Mid Kent College, Chatham Campus).

War with France began again in 1778, and once more it was necessary to strengthen the defences. Fort Amherst was the first to be improved; it was followed by work beginning in 1800 to add others at Fort Pitt, Chatham, plus Fort Delce and Fort Clarence (both in Rochester); later in the 19th century others were added, including one at Fort Darland in Gillingham. Within all these buildings a barracks was built to house the soldiers. All this work, and the expansion of the dockyard, meant that more homes were needed for the workers. The position of the Lines meant that this building could only happen beyond, and so New Brompton came into being. The population rose to 9,000 people by 1851. 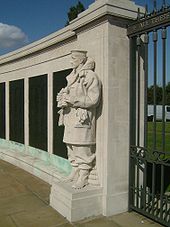 Gillingham was still only a small village; eventually it, too, was swallowed up, and the name of the whole settlement changed to Gillingham. In the 1891 census its population was 27,809, and in 1901, 42,530. In 1919, after World War I, a naval war memorial in the shape of a white stone obelisk was set up on the Great Lines, from where it can be seen for many miles. By 1901 Gillingham had a population in excess of 40,000.[3] Additional structures were added in 1945 to commemorate the dead of World War II. Similar monuments stand in the dockyard towns of Portsmouth and Plymouth.

Gillingham has been the scene of two notable disasters: on 11 July 1929 a public demonstration by Gillingham Fire Brigade went wrong, resulting in 15 fatalities;[4] and in the 1951 Gillingham bus disaster, 24 Royal Marine cadets aged 10 to 13 were killed in a road accident.

The main source of employment was at Chatham Dockyard, two-thirds of which lay within the boundaries of Gillingham. When it ceased to be a naval base in 1984, there was significant unemployment. A World Heritage Site application is today planned for the Dockyard and its defences.[5] Since the '80s, Gillingham has rebuilt its economic base and the Gillingham Business Park was set up 3 miles (4.8 km) from the city center, in order to attract investments and diversify economic activity. The business park is one of the most popular business locations in North Kent and is located about two miles (3 km) north of the M2 motorway. Gillingham has a marina called Gillingham Marina. Gillingham is an important retail centre serving a substantial part of Medway. The town has a large street market in the High Street on Saturdays and Mondays, and is the busiest in the whole of Medway.[6]

The Roman road now known as Watling Street passed through Gillingham; and until the opening of the Medway Towns bypass (the M2 motorway) in the mid-1960s the same route was followed by the traffic on the A2 to Dover. That road had been turnpiked in 1730, as part of the London–Canterbury coaching route.

In June 1996 the Medway Tunnel opened, linking Gillingham with the M2 and Strood.

The London, Chatham and Dover Railway opened its line between Chatham and Faversham on 25 January 1858; and a country station was opened here called New Brompton. This was to serve the dockyard labourers' homes that had sprung up during the Napoleonic Wars. A branch line led into the dockyard. The station later became Gillingham Railway Station.

Services improved significantly when in July 1939,[7] Gillingham became the terminus of the electrified system of the Southern Railway.

Gillingham was served by an electric tram system operated by the Chatham and District Light Railways Company from 1902 to 1930.[8]

Priestfield Stadium, Home of the Gills

The town is home to Gillingham F.C., who play at Priestfield Stadium and were first elected to the Football League in 1920 as members of the new Football League Third Division (south). They were voted out of the league in 1938, only to be re-elected when the league expanded in 1950. They spent the next 50 years bouncing between the two lower divisions before finally reaching the second tier (then Division One) in 2000. They spent five years at this level before being relegated, and currently play in League One (third tier), to which they were promoted in 2009. Notable former managers include Peter Taylor, Andy Hessenthaler, Stan Ternent, Tony Pulis, and Ronnie Jepson. Notable former players include Ade Akinbiyi, Steve Bruce, George Burley, Tony Cascarino, Marlon King, Glenn Roeder (who was the club's player-manager for a season in the early 1990s), Ron Saunders, Steve Walford and Rod Wallace.

The area boasts a sub-regional sports centre (the Black Lion Leisure Centre, now Medway Park) with three indoor pools for swimming and SCUBA diving, gym, sports hall and squash courts and includes the Jumpers Rebound Centre for trampolining. Funding has been secured to extensively upgrade the Black Lion Leisure Centre as part of the Medway 2012 programme to secure local benefits from the London Olympics.

There is an outdoors sporting centre located at the Strand which provides sailing and motor boat courses for both adults and children.

The open-air swimming pool at The Strand

Gillingham Ice Bowl is the home ice rink for Kent's premier Ice Hockey Club the Invicta Dynamos. The Ice Bowl was officially opened by Her Majesty the Queen in 1984. The Strand Leisure Park has an open-air swimming pool on the banks of the River Medway as well as other leisure attractions including tennis courts and a narrow-gauge railway.

The local radio station for Gillingham is KMFM Medway, owned by the KM Group. The area can also receive the county wide stations BBC Radio Kent, Heart and Gold, as well as many radio stations in Essex and Greater London.

The Gillingham Boys Grammar School, which was opened in 1923,[3] later became The Howard School in 1975, when it merged with the Rainham Campus secondary school for boys. Other secondary schools include Rainham Mark Grammar School (formerly the Gillingham Technical School, Brompton Academy (formerly New Brompton College and before that Upbury Arts College, Upbury Manor), Rainham Girls School and The Robert Napier School. Another educational institute in the town is the Kent College of Business Computing. There are also three primary schools in the small residential area called Twydall: Twydall Infant School, Twydall Junior School and St Thomas of Canterbury R.C. School. In Gillingham itself are St. Mary's, Barnsole Road, Woodlands, Byron, and Napier Community Primary Schools. In Wigmore there is the Fairview Infants and Junior Schools and in Hempstead the Hempstead Infant and Junior Schools.

Within Gillingham there are many churches from different denominations of Christianity. There are three Church of England churches: the historic parish church of St. Mary Magdalene; the evangelical St. Mark's; and St. Augustine's. There are also Baptist, Methodist and Roman Catholic churches.

The Parish Church of St Mary Magdalene ("The Church on the Green") dates back to the twefth century and is the oldest building in Gillingham.

In 1896, Our Lady of Gillingham Roman Catholic Church was built close to Saint Mary Magdalene Church, and overlooks the River Medway.

A view of Our Lady of Gillingham Catholic Church.

It followed after other Roman Catholic churches in the area, the closest, St Michael's in Chatham (built 1863). Our Lady of Gillingham was built on the town of New Brompton, as Gillingham was then called, to mainly cater for the new workforce – those employed at Chatham Dockyard. The church itself was started in 1890, and was completed by 1896, being opened on 12 May 1896.

A local Roman Catholic school was established on the site of the church in 1894. The schoolrooms were used until 1972, when the infant section of the school relocated to nearby Greenfield Road. in 1988, after more building work on the new site, the whole school was reunited on its new site at Greenfield Road.

The Church celebrated its centenary in May 1996, two years after the local school.

Gillingham also has the Jāmi’ah mosque and a Hindu Sabha Mandir.