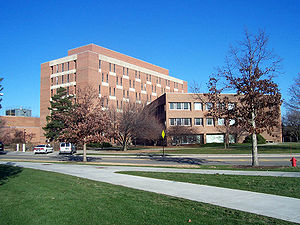 Wells Hall is a sprawling classroom and office building just south of the Red Cedar River.

Michigan State has over 200 academic programs on its East Lansing, Michigan campus. MSU is well known for its academic programs in education and agriculture, and the university pioneered the studies of packaging, horticulture and music therapy.[citation needed] MSU has the premier hospitality school in the United States, and the study abroad program is the largest of any single-campus university in the nation, offering more than 200 programs in more than 60 countries on all continents including Antarctica.[1]

As a research university, MSU is one of 60 members of the Association of American Universities. Since its inception as a small agricultural college in 1855, MSU has put a strong emphasis on research. Important discoveries made at MSU include hybrid corn, homogenized milk, antio-cancer drug cisplatin, and Germanium isotope Ge-60. Like other large American universities, MSU has many teaching assistants teaching upper-level courses. Michigan State University Ombudsman is the oldest continually operating ombudsman office at a college or university in the country.[2] 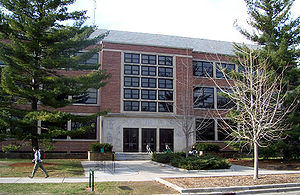 Michigan State has the seventh largest student body in the U.S. There are 45,166 total students, with 35,678 undergraduates and 9,488 graduate and professional students. The student body is 54% female and 46% male. While 89% of students come from all 83 counties in the State of Michigan,[3] also represented are all 50 states in the U.S. and about 125 other countries.[4] MSU has about 4,500 faculty and 6,000 staff members, and a student/faculty ratio of 19:1.[5] Like other large American universities, MSU has a large number of teaching assistants teaching upper-level courses. This led The Princeton Review in 2005 to rank MSU eleventh worst in the category of "teaching assistants teach too many upper-level courses".[6] 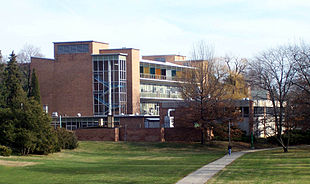 Michigan State ranks 75th in the world, according to a Shanghai Jiao Tong University study,[7] with U.S. News & World Report's ranking MSU 70th in the U.S.[8] The university has over 200 academic programs, several of them highly-ranked. U.S. News has ranked MSU's graduate-level elementary education",[9] secondary education,[10] and Industrial and Organizational Psychology[11] programs number one for the last decade. In U.S. News also ranks MSU's nuclear physics program second, behind only MIT. Indeed, MSU’s Physics & Astronomy department ranks highly based on the number and impact of publications its faculty publishes. In addition to this, the 2007 U.S. News ranks Michigan State's Supply Chain Management program in the Eli Broad College of Business number one in the nation, beating out MIT (ranked second). The National Communication Association ranks MSU doctoral programs as the nation’s most effective in educating researchers in health communication and communication technology.[12] MSU also is ranked in the top four in several other communication fields, including international/intercultural communication, mass communication and interpersonal communication. Other programs of note include criminal justice,[13] music therapy,[14] hospitality business,[15] packaging,[16] political science,[17] and communications.[18] MSU's study abroad program is the largest of any single-campus university in the United States with 2,461 students studying abroad in 2004–05 in over 60 countries on all continents, including Antarctica.[19] 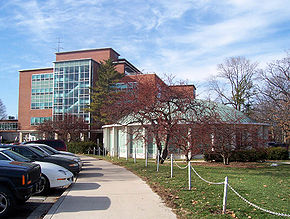 The university spent nearly $380,000,000 million in 2005-06 on research ,[20] capping a long history of productive research. In 1877, botany professor William J. Beal performed the first documented genetic crosses to produce hybrid corn, which led to increased yields. MSU dairy professor G. Malcolm Trout invented the process for the homogenization of milk in the 1930s. In the 1960s, MSU scientists developed cisplatin, a leading cancer fighting drug. Today Michigan State continues its research with facilities such as the U.S. Department of Energy-sponsored MSU-DOE Plant Research Laboratory and a particle accelerator called the National Superconducting Cyclotron Laboratory.[21] In 2004, scientists at the Cyclotron produced and observed a new isotope of the element germanium, called Ge-60.[22] In that same year, Michigan State, in consortium with the University of North Carolina at Chapel Hill and the government of Brazil, broke ground on the 4.1-meter Southern Astrophysical Research Telescope (SOAR) in the Andes Mountains of Chile. The consortium telescope will allow the Physics & Astronomy department to study galaxy formation and origins.[23] Since 1999, MSU has been part of another consortium called the Michigan Life Sciences Corridor, which aims to develop biotechnology research in the State of Michigan.[24] The College of Communication Arts and Sciences' Quello Center researches current issues of information and communication management. Avida, an artificial life software platform to study the evolutionary biology of self-replicating and evolving computer programs, is under active development by Charles Ofria in the Digital Evolution Lab of the Department of Computer Science and Engineering.[25] Albert Fert an Adjunct professor at MSU was awarded the 2007 Nobel Prize in Physics together with Peter Grünberg.[26] In February 2010, a $25 million grant was awarded by the National Science Foundation to the university to develop a Bio/computational Evolution in Action Consortium (BEACON) within the BioMedical and Physical Sciences Building.[27] 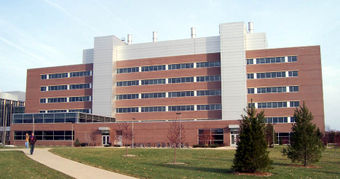 MSU's (private, non-Morrill Act) endowment started in 1916 when the Engineering Building burned down. Automobile magnate R. E. Olds helped the program stay afloat with a gift of $100,000.[28] While this opened the door for other types of private donations, MSU has often lagged behind peer institutions in terms of endowments. As recently as the early 1990s, MSU was last among the eleven Big Ten schools, with barely over $100 million in endowment funds. However, in the early 2000s, the University started a campaign to increase the size of the endowment. At the close of FY 2004–05, the endowment had risen to $1.325 billion, raising the University to sixth of the 11 Big Ten schools in terms of endowment; within $2M of the fifth-rated school.[29] The rapid increase in the size of the endowment will help to improve outdated facilities, such as the Music Building, which the College of Music hopes to soon replace with money from its alumni fundraising program.[30] 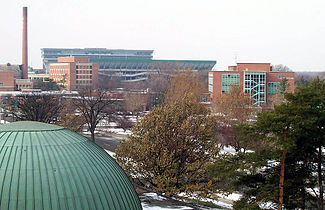 James Madison College (JMC), one of MSU’s three residential colleges, started in 1967. The concept behind Madison College was to merge the best attributes of a small public affairs college with the resources of a major university. Though JMC started as an experiment, it is now a well-respected liberal arts program.[31] Madison admits about 320 students each year, holding the total student body around 1,150. Classes in the college are small, with an average of 25 students, and most instructors are tenure track faculty with PhDs or occasionally PhD candidates.[32] As a residential college, JMC has its classrooms, offices, and student housing together in Case Hall. As part of its "living-learning" philosophy, JMC requires freshmen students to live in Case during their freshman year.[33]

Madison offers majors, which students choose at the end of their freshman year. The four majors are Political Theory and Constitutional Democracy, International Relations, Social Relations, and Comparative Cultures and Politics. All of JMC’s majors require two years of foreign language and one "field experience”, either in the form of an internship or study abroad program. James Madison College also has a fairly large amount of academically successful students. Madison boasts numerous major award recipients, including Rhodes, Truman, Fulbright and Marshall Scholars to name a few. About 15% of its students are in the Honors College and though JMC only represents about 4% of MSU graduates the college, they make up around 35% of the MSU’s Phi Beta Kappa members.

Residential College for Arts and Humanities 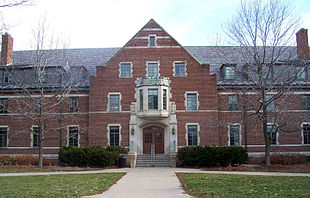 In 2007, MSU accepted its first class of students for the Residential College in Arts & Humanities. Founded October 21, 2005,[34] the college provides around 600 undergraduates with an individualized curriculum in the liberal, visual and performing arts. Though all the students will graduate with the same degree, MSU will encourage students in the college to get a second degree or specialization.[35] The new college will be MSU's fourth residential college, after James Madison College, the Lyman Briggs School, and the now-defunct Justin Morrill College. Although early proposals named the college after Nelson Mandela,[36] university officials have not decided on a permanent name as of 2006[update], saying that it is still too early to fix a permanent name to the college.[37]

RCAH classes will start in Autumn 2007 in the Collegiate Gothic Snyder-Phillips Residence Hall. Built in 1947, Snyder-Phillips once housed Justin Morrill College. MSU is currently renovating the dormitory to make room for the new college. Along with a new dining hall and upgraded bathrooms, the expanded Snyder-Phillips will include a 150-seat multipurpose classroom and performing arts space, a student art gallery, a Wi-Fi-enabled coffeeshop, music practice rooms, and a language learning center.[38]

The Lyman Briggs College teaches math and science within social, historical and philosophical contexts.[39] Founded in 1967 as Lyman Briggs College, it was merged into the College of Natural Science in 1981, though the college has now regained its full college status. Many Lyman Briggs students intend to pursue careers in medicine, but the school supports 37 coordinate majors, from human biology to computer sciences.[40] Lyman Briggs is one of the few colleges that lets undergraduates teach as "Learning Assistants."[41] 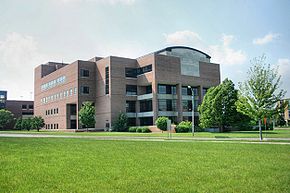 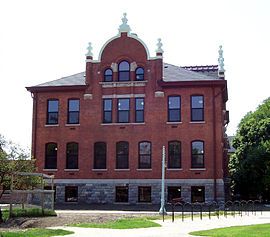 The newly renovated and renamed Marshall-Adams Hall is home to the Department of Economics.

The first trial practice institute in the United States, the Geoffrey Fieger Trial Practice Institute,[44] started at Michigan State University College of Law with a grant of $4 million from Geoffrey Fieger.[45] The Intellectual Property and Communications Law program is ranked number 1 among law schools in the Big Ten Conference, and number 17 in the United States. In addition, MSU College of Law's Indigenous Law Program offers an Indigenous Law Certificate Program.[46]

The Eli Broad College of Business has programs in accounting, information systems, finance, management, marketing and supply chain management, and hospitality business and Human Resources Management. The school has 4,775 undergraduate students and 776 graduate students. The Eli Broad Graduate School of Management, which Business Week magazine ranks 11th among public institutions, offers 3 MBA programs, as well as joint degrees with the College of Law.[47] 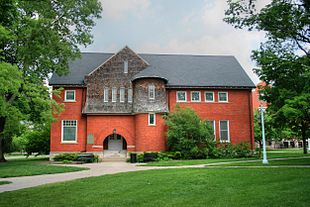 The Honors College was established in 1956 to provide more academic opportunities to MSU students, and to emphasize academic challenge and achievement. It is currently housed in Eustace-Cole Hall on the northern portion of MSU's campus.

Members of the Honors College at Michigan State University enjoy a great deal of freedom over their academic planning. They are allowed to skip prerequisites, substitute departmental courses for general education requirements, and enroll in Honors courses. Honors College members are also eligible to enroll in graduate courses. Upon graduation from the Honors College, a student receives an Honors College stole to wear at commencement.

MSU opened the College of Human Medicine was founded in 1964. The pre-clinical campus is located on Michigan State University's main campus in East Lansing. Clinical practice, undergraduate medical education during the clinical years three and four, graduate medical education, and research takes place across six campuses located in the Michigan cities of Flint, Kalamazoo, Grand Rapids, Lansing, Saginaw, and Marquette. An additional four-year undergraduate medical training facility in Grand Rapids is scheduled to be phased in to operation between 2008 and 2010 that will run in parallel to the existing program in East Lansing.

The Michigan State University Library is the 26th largest academic library system in North America with over 4.7 million volumes and 6.4 million microforms.[50] The university library comprises nine branch locations including the main library. The Africana Collection is one of the largest of its kind in the nation with a collection of over 200,000 items.[51] Other significant collections include The G. Robert Vincent Voice Library, the largest academic voice library in the nation, containing a collection of over 40,000 hours of spoken word recordings and includes the voices of over 100,000 persons from all walks of life,[52] and the Russel B. Nye Popular Culture Collections which includes the extensive Comic Art Collection.[53] This collection currently includes over 100,000 comic books, and 10,000 related books and periodicals.[54][55][56]