The Los Angeles Department of Water and Power (LADWP) is the largest municipal utility in the United States, serving over four million residents. It was founded in 1902 to supply water and electricity to residents and businesses in Los Angeles and surrounding communities. The LADWP receives no tax support, and contributes about $190 million annually to the revenues of the city of Los Angeles.[citation needed]

By the middle of the 19th century, Los Angeles's rapid population growth magnified problems with the city’s water distribution system. At that time a system of open ditches, often polluted, was reasonably effective at supplying water to agriculture but was not suited to providing water to homes. In 1853, the city council rejected as "excessive" a closed-pipe system that would serve homes directly.[2] As a solution, the city allowed "water carriers with jugs and horse-drawn wagons…to serve the city’s domestic [water] needs".[2] It took until 1857 for the council to realize that the system needed to be updated, which led them to grant William G. Dryden franchise rights to provide homes with water through a system of underground water mains. The initial system served only a few homes using an unreliable network of wooden pipes. In December 1861, heavy rains destroyed the system and Dryden gave up his franchise. The city attempted contracting out water distribution rights to others, but none of the systems that resulted from these contracts was successful.

The city’s previous unsuccessful attempts to allow others to develop a water system on its behalf prompted the city council to relinquish its rights to the water in the Los Angeles River in 1868, benefited John S. Griffen, Solomon Lazard, and Prudent Beaudry, three already successful businessmen. This change was at the expense of the city of Los Angeles, which could no longer benefit from their municipal water distribution business. The three men created the Los Angeles City Water Company, which violated many of the provisions of its lease on the Los Angeles River, including secretly tunneling under the river to extract 150 times as much water as the lease allowed. As a result, as the end of the lease drew near in the mid-1890s, “popular support began to build for a return to complete municipal control of the local water supply”.[3] 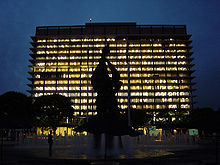 Throughout the negotiations, it became clear that it was necessary for the current senior employees of the Los Angeles City Water Company to keep their jobs in order to ensure that the water system could continue to operate. It was not guaranteed, however, that William Mulholland, Eaton’s protégé and the man who took over the job of superintending engineer when Eaton was elected city engineer, would have a position working with the city-owned water system. Mulholland was not popular with city officials because he did not produce records that the city requested during negotiations. Near the end of the talks between the city and the water company, it was discovered that neither the requested records nor a map of the water system existed. Mulholland, who was supposed to be in charge of the non-existent records, was never a fan of paperwork and claimed that he had memorized all of the necessary information, including “the size of every inch of pipe and the age and location of every valve”.[4] Mulholland secured a job with the city when he successfully demonstrated his ability to recall the information. Once Mulholland was assured a job with the city, he “promptly intervened with the company’s principal stockholder, advising him to accept the city’s offer of two million dollars for the system”.[4]

The LADWP first offered municipal electricity in 1917 when the San Francisquito Power Plant began generating electricity. It ultimately produced 70.5 megawatts and is still in operation in 2004, producing 44.5 megawatts. 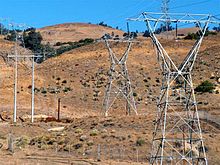 On January 17, 1994, the city of Los Angeles experienced its one and only total system black-out as a result of the Northridge earthquake. Much of the power was restored within a few hours.

In September 2005, a DWP worker accidentally cut power lines that caused over half of Los Angeles to be without power for one and one-half hours.[5]

The rolling blackouts in the summers of 2006 and 2007 were caused by extreme high temperatures. Because the components were up to 60 years old, the extreme temperatures melted the power transformers and insulators. As a result, LADWP has decided to upgrade the overhead power lines.

In 1928, the St. Francis Dam, built and operated by the LADWP, collapsed catastrophically. Over four hundred-fifty people died in the immediate vicinity, but the overall death toll was mitigated by prompt warnings sent to downriver communities in the Santa Clara River Valley, including Fillmore, Santa Paula, and San Buenaventura. Mulholland assumed full responsibility for the disaster and retired. The pall of the disaster hung over him until his death in 1935.

The LADWP has been a leading actor in the struggle over access to water from the Owens Valley, starting with its initial acquisition of water rights, as well as buying out farms and asserting control over Mono Lake and Owens Lake.

The LADWP and William Mulholland played a key role in the development of Hoover Dam and bringing its energy to Los Angeles. The LADWP continued to operate the Hoover Dam electrical facility until 1987.

In addition to the city of Los Angeles, LADWP also provides services to these communities:[6]

The LADWP currently maintains a generating capacity of 7,200 megawatts, in excess of the peak demand of 6,165 megawatts by the city of Los Angeles.[7] It provides this surplus electricity to other utilities, selling 23 million megawatt-hours in 2003. As of 2005, the LADWP operates four natural gas-fired generating stations within city boundaries, which account for 26% of capacity.[7] It receives 52% of its electricity from coal-fired plants in Utah, Arizona, and Nevada.[8] A further 11% is generated using nuclear power.[7] It receives about 6% of its electricity from hydropower, most coming from Hoover Dam and the rest coming from the aqueduct system itself as the water descends from its mountain sources.[9]

The LADWP, along with the California Department of Water Resources, also operates the Castaic Power Plant as a pumped storage facility. Water flows from the upper reservoir to the lower during the day, generating power when demand is highest, and is pumped back up at night when excess capacity is available.[10] About 1,600 megawatts, or 22% of the total capacity, is generated at this facility alone [9]. The Los Angeles City Council voted in 2004 to direct the LADWP to generate 20% of its energy (excluding Hoover Dam) from clean sources by 2010 [9]. Current "green power" sources account for 5% of the LADWP's capacity, but there are plans to add a 120 megawatt wind farm in Tehachapi, California, and produce electricity from geothermal sources in the Salton Sea area and photovoltaic sources.[9]

Because Los Angeles is older than most other cities in California, the LADWP is currently faced with several unique issues. Most of the power lines in Los Angeles were built above-ground before it became customary to run power lines below-ground; as a result, the horizon line of the typical Los Angeles boulevard looks much more cluttered than boulevards in most Southern California cities.[citation needed] Starting in 2007, LADWP has a long-term project to upgrade the overhead power lines and convert them to underground. This difficult conversion has been slowed by budget constraints, the impact on traffic, the pursuit of other modernization projects, and the lingering effects of a workforce reduction over the last decade. Budget issues are particularly acute in the department's transmission system, where underground transmission costs about 10 to 14 times the cost of overhead transmission, per unit length, and the technical and environmental challenges which confront such installations.[11] Upgrading the overhead lines is expected to take 10 to 15 years. The upgrading of LADWP's overhead power lines consists of eliminating the V-shape brackets on the power poles that are holding up the crossarm and replacing them with cross-brackets that are put on the crossarm. Some of the wooden power poles are being replaced with metal poles.[citation needed]

The department recently completed two 230 kV underground projects using an innovative cable technology which does not utilize oil as an insulator. The oilless cable mitigates the environmental issues associated with oil-type cable.[citation needed]

The use of water from specific sources can vary greatly from year to year.

The prospect of increased demand coupled with reduced supply from the Mono and Owens basins is causing the LADWP look into a number of new water sources, including a new direct connection to the California Aqueduct, increased use of recycled water, use of stormwater capture and reuse, and increased conservation. Many of the old pipelines are beginning to wear out, or are at capacity and insufficient to handle future demand. LADWP has undertaken pipeline replacement projects on many L.A. boulevards like Exposition and Olympic.

Unusual for a municipal public utility, LADWP has been mentioned several times in popular culture, both fiction and nonfiction: